How does one dupe voters?

That is simply not true!
Where did this $13 Billion backlog claim from? It did not come from the County. We have now learned this claim came from Hillsborough County's Transportation Planning Organization (TPO).

But the TPO's claim is very misleading because a super majority of that backlog are state and federally funded transportation projects - funded by state and federal taxes you already pay for.

$8-9 Billion (62-65%) of the $13B transportation backlog are for transportation improvements to state and federal highways and interstates. Those projects are NOT funded by local transportation sales tax hikes such as the $23 Billion Rail Tax.

Local transportation sales surtaxes DO NOT fund interstates or state and federal highways.

But AFT uses their misleading claim to dupe voters into thinking their $23 BILLION rail tax is needed to fund the entire $13 Billion backlog.

From a Public Records Request, Assistant County Attorney John Lyons documented  the transportation backlog on May 19, 2022 is $4.42 Billion over 30 years.

Property tax revenues are flooding the County's coffers. Obviously, the County can fund its transportation backlog without a new massive tax hike.

But AFT must regurgitate misleading talking points from the TPO trying to sell their massive Rail Tax that just happens to greatly benefit the TPO.

The TPO will receive over $600 Million in new tax dollars to bloat their bureaucracy even more and fund studies after studies to enrich consultants.

AFT ignores the rail projects in the TPO's and HART's transportation plans when they falsely claim their Rail Tax is not funding rail.

Courtesy of the TPO, below are pictures of the Streetcar, Light Rail, Commuter Rail, SunRail from the TPO's Long Range Transportation Plan (LRTP) to be funded by the $23 BILLION Rail Tax. 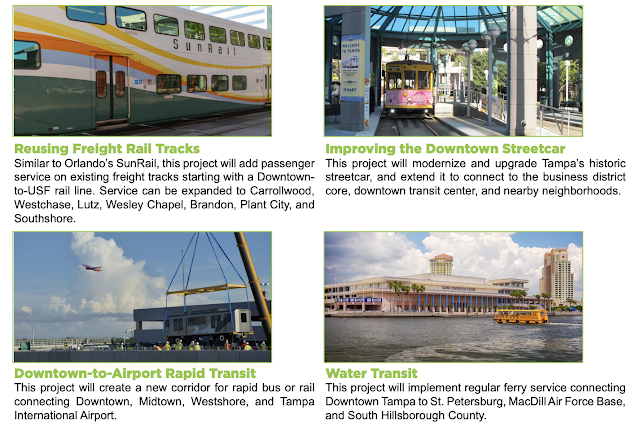 The extension and transformation of the Tampa Streetcar into Light Rail is a top priority of the HART Board. The "free to the rider, 100% subsidized by the taxpayers" Streetcar project is Mayor Castor's highest priority. The city of Tampa has provided a rendering of the new Light Rail funded by the Rail Tax.The CSX lines used for passenger rail ala the costly accident prone fiscally failing SunRail SunFail in Central Florida are also in the TPO and HART's Transportation Development Plan (TDP).
No wonder the Rail Tax Ordinance that placed the tax on the ballot codified the TPO's Long Range Transportation Plan into the rail tax (Section 4D of the Ordinance).
Note: Whether it is legal or not to codify a transportation plan created by the TPO, and not by the County, into a County tax remains a question for another day. The TPO does not have jurisdiction over the County and Hillsborough County has only 5 members on the 16 member TPO Board - they are a minority on the Board.
No wonder AFT refuses again to debate their formal opposition NoTaxForTracks because: