About That AFT $23 BILLION Rail Tax: Fact Checking Pro Rail Tax Supporters is Why They Refuse to Debate NoTaxForTracks 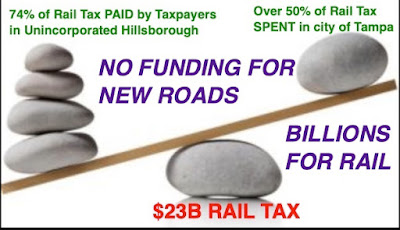 Deja vu! Over $212K of glossy Mailers of Misinformation from the Pro Rail Tax PAC, All for Transportation (AFT), have flown out to deceive voters again.

Let's breakdown some of AFT's deception.

First of all - AFT tries to deceive voters that a quote used in their Mailer of Misinformation is from the Tampa Bay Times.

The quote below used in AFT's Mailer of Misinformation came from AFT's Chair Tyler Hudson. AFT's claim the Rail Tax is a "balanced solution" is just an OPINION that Hudson used in AFT's Pro Rail Tax Op-Ed published in the Tampa Bay Times on September 14. 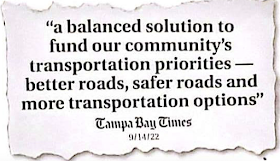 AFT insinuates this quote is from the Times. AFT fails to disclose the quote they used is their own OPINION from their own Op-Ed in support of their own Rail Tax plan.
AFT admits in their Op-Ed it is their Rail tax plan - not any transportation plan created by the County - that is on the ballot again. AFT's plan was crafted behind closed doors with special interests and taxpayer funded bureaucrat insiders, outside of Sunshine and with no public input.
AFT's OPINION that their $23 BILLION Rail Tax is a "balanced solution" to fund transportation in Hillsborough County is nonsense.

Because dictating taxpayers must hand HART, a fiscally mismanaged transit agency, most of the Rail Tax dollars is total nonsense.

Mandating HART get 45% of all new Rail Tax dollars (~$10-11B) to fund rail/transit in Tampa and financially bail out HART out is fiscally irresponsible.

HART, with a ridership of 2%, cannot properly manage its property tax revenues and other existing revenues they already receive.

It is nonsense for HART to receive Billions more when 76%, a super duper majority of those surveyed last year by Hillsborough County stated they would NOT use transit.

When those who rejected transit were asked why, a super super duper 87% said they had no need to use transit.

89% of those surveyed by the County last year want their roads improved and widened. The County's own survey last year confirms AFT's Rail Tax is unwise and absolutely foolish.

Forcing taxpayers to massively overfund HART is irrational and preposterous.

But it does confirm how out of touch the Pro Rail Tax supporters are with Hillsborough County residents. Pushing their transit ideology is more important.

The AFT Mailers of Misinformation do not call their Rail Tax what it is - a TAX. It's a 30 year $23 BILLION tax hike.

The AFT Mailers of Misinformation do not mention Rail because they can't.

Rail is toxic to voters in Hillsborough County.

The AFT Mailers of Misinformation do not mention road widening or new roads because they can't.

AFT's Mailers of Misinformation do not acknowledge who benefits the most from their Rail Tax because they can't.

The city of Tampa, where only 1/3 of the County's population resides, will benefit the most.

Tampa will receive 12% of the total Rail Tax. And Tampa will benefit the most from HART's mandated Billions that will fund costly rail/transit projects and services in Tampa.

While 74% of the tax will be paid by taxpayers in unincorporated Hillsborough.

AFT's Rail Tax is inequitable and unfair. It is certainly not "balanced".

AFT's Mailers of Misinformation claim there will be "less traffic" with their Rail Tax. AFT provides no evidence to support this claim because they can't.

The Pro Rail Tax supporters and their media allies will never acknowledge there is a better plan to fund transportation in Hillsborough County that uses existing revenues and requires NO new massive tax hike.

AFT's Mailers of Misinformation will keep flying out until election day.

This is why the AFT and the Pro Rail Tax supporters refuse to debate or even acknowledge their formal opposition NoTaxForTracks.

But their smugness of deceit can be defeated at the ballot box.