About That $23 BILLION Rail Tax On The Ballot: DO YOU KNOW? 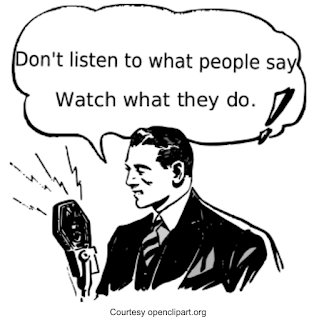 It's time to scrutinize the $23 BILLION Rail Tax on the November Ballot in Hillsborough County.

Just as we did in 2018, we will sound the warning again about the massive Bait and Switch Rail Tax do-over. The 2022 Rail Tax again massively overfunds HART - a transit agency with 2% ridership - who financially benefits the most from the tax hike. 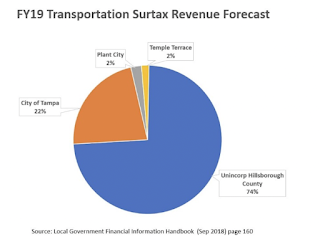 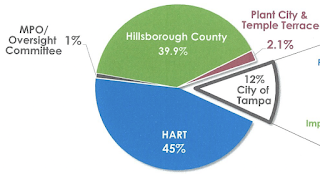 There are NO ROAD-RESTRICTED Funds in the Rail Tax. There are only General Purpose funds (54.5%) other than the 45% Transit Restricted funds. The last half-cent (.5%) will be spent on bureaucrats, growing the bureaucracy and enriching consultants.

Some of those General Purpose funds can also be spent on rail. Yes it's a rail tax!

The last half-percent of the Rail Tax is earmarked for the Hillsborough County Transportation Planning Organization (TPO). For decades, the TPO has wasted gobs of taxpayer dollars pushing rail tax boondoggles while failing to focus on improving the roads - a priority of the vast majority.

0%, yes ZERO PERCENT, is mandated or earmarked to fund new auto-lane capacity over 30 long years of the $23 BILLION Rail Tax.

There is only 2.2% of "Remaining Funds" of the total $23 BILLION total Rail Tax not already mandated and appropriated in the Rail Tax Ordinance that may (or may not) fund new road capacity. Funding for any new roads in the Rail Tax is 0-2.2%.

Therefore, a maximum of only about $500 MILLION over 30 years Could (or Could Not) be used to fund new road capacity. But there's a caveat in the Rail Tax Ordinance about those "Remaining Funds".

The caveat is the 2.2% of Remaining Funds shall, which also means must be spent on transportation projects permitted by Florida Statute 212.055 AND this Ordinance. The Rail Tax Remaining Funds that are not transit restricted CAN be spent on rail/transit not road improvements.
This is why nowhere in the Rail Tax Ordinance 22-9 can be found the words "new road capacity", "additional road capacity", "new roads", or "new auto-lanes". The only time the word "capacity" is used is about funding intersection capacity improvements on existing roads with turn lanes and roundabouts.
The only dedicated funding for "Congestion Reduction" shall aka must be spent on existing roads, streets and intersections. These funds cannot be spent on reducing congestion by adding new auto-lane road capacity

All of the Rail Tax funding for Safety Improvements must only be spent on existing roads and streets. Adding new capacity to congested roads and building new roads are safety improvement the Rail Tax does NOT allow.

About $1.5 BILLION of the total Rail Tax is dedicated and must be spent on sidewalks, bike paths and trails, including additional sidewalks, bike paths and trails. Compare that to the 0% dedicated for new roads.
The $23 Billion Rail Tax is Specifically and Intentionally being used to CONSTRAIN the funding of much needed new road capacity in Hillsborough County. This is why Hillsborough County cannot COMMIT to spending ANY of the massive Rail Tax hike on new road capacity.
Yet the Rail Tax ballot language misleads the voting public again just as the 2018 Rail Tax ballot language did. The ballot language, which is the only information EVERY voter is guaranteed to see and read, misleads the public into thinking that building new roads and widening roads is the top priority of the Rail tax. 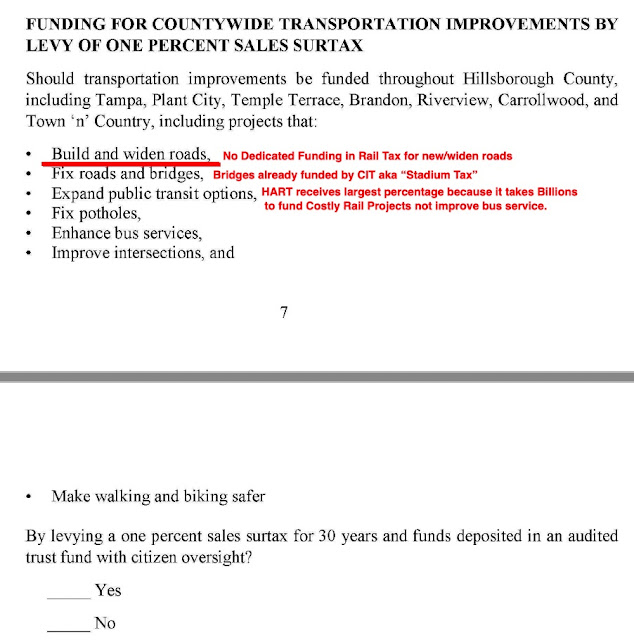 It is impossible to reduce traffic congestion in Hillsborough County without adding new road capacity.
And why this comment by Chief Rail Tax supporter Commissioner Kimberly Overman, who is no traffic engineer or transportation expert, is absurd and so condescending:

"it would be a wise idea for the individuals that need to understand transportation planning what additional capacity means….you actually can create the goal or achieve the goal of congestion reduction without adding lanes to the process."

Spending Billions on trains and transit has never reduced traffic congestion anywhere those billions have been spent.
The $23B Rail will increase traffic congestion and force taxpayers to spend Billions on rail/transit they will never use.
Over 50% of the total Rail Tax will be spent in the city of Tampa. This is a Rail Tax created by Tampa urbanist transit activists. It totally ignores the new road capacity needs of unincorporated Hillsborough and enriches the wealthy downtown developers.
Anyone who claims this massive Rail Tax is a "Balanced" transportation funding plan is lying.
Also Beware of the County coming back to taxpayers in 2024/2026 when they complain there is no funding in the Rail Tax for new road capacity.
The Rail Tax is a Traffic Congestion Creating Tax that must be Stopped!
The $23B Rail Tax is not the only transportation funding plan in town. There is another Transportation funding plan that will fund transportation without this massive new tax hike.
County Property tax revenues increased 14% over last year and 40% since 2020. But the County has intentionally excluded all rising property tax revenues from funding - a fundamental and primary responsibility of local government and one of the highest priorities in the County.
The County must do much much better. That starts by using existing revenue streams, including ad valorem property taxes, and prioritizing the County's ballooning bloated budget to properly fund transportation.
There is absolutely no "need" for the County to take $23B more out of your wallets.
Vote NO in November!
Posted by Sharon Calvert at 12:54 PM