The Hillsborough County PTC is a case study in regulatory capture.

First, what is regulatory capture? It is defined by Investopedia as


Regulatory capture is a theory associated with George Stigler, a Nobel laureate economist. It is the process by which regulatory agencies eventually come to be dominated by the very industries they were charged with regulating. Regulatory capture happens when a regulatory agency, formed to act in the public's interest, eventually acts in ways that benefit the industry it is supposed to be regulating, rather than the public.

Public interest agencies that come to be controlled by the industry they were charged with regulating are known as captured agencies. Regulatory capture is an example of gamekeeper turns poacher; in other words, the interests the agency set out to protect are ignored in favor of the regulated industry's interests.


Regulatory capture is a form of political corruption that occurs when a regulatory agency, created to act in the public interest, instead advances the commercial or special concerns of interest groups that dominate the industry or sector it is charged with regulating. Regulatory capture is a form of government failure; it creates an opening for firms to behave in ways injurious to the public (e.g., producing negative externalisties). The agencies are called "captured agencies".

Recent events put the PTC's regulatory capture on display.  Last week's local Hillsborough County Delegation public hearing included several local bills.  One of them was proposed by State Rep Jamie Grant and State Senator Jeff Brandes for a Hillsborough county referendum to abolish the PTC, if the referendum passed.  For transparency, I spoke in support of the bill though I preferred since the state legislature created the agency 38 years ago, they should be able to abolish it without going thru a referendum. There may be some legal reason why a referendum is necessary, but I do believe that if a referendum was held, it would pass.  And the special interests, mostly taxi cab and limo services that benefit from the PTC, must think so too because they showed up en masse to oppose the bill.

Victor Crist, county commissioner and chairman of the PTC who opposed the bill, spoke first. He laid the groundwork for the oppositions talking points for the day to fuel a fear that bad or corrupt service would occur in Hillsborough if not for the PTC and that the PTC is required for public safety. Crist further stated that they are working an internal audit plan focused on internal staff policies and procedures. That audit plan was discussed at the PTC's November 13 meeting per the meetings transcript where Interim Director Kevin Jackson recommended the audit be done by the county's Internal Performance Auditor and the PTC unanimously voted on a motion to do that. However, when Rep. Grant asked Crist if his "reform" plan includes reforming the $50 minimum limo charge, Crist simply stated that his highest priority is what the audit is focused on, internal policies first.

After Crist, the special interest troops who opposed the "abolish the PTC" bill and support maintaing the status quo were lined up to speak. Here's where the PTC as a "captured agency" was on full display. Public safety was their cry of the day as if the 66 other counties in Florida who do not have a PTC have no safety regulations.

No one from either side stated there should not be safety regulations -- background checks, vehicle inspections--common sense safety regulations that can be managed by the county. But as one speaker stated who supported the bill, there are good regulations and there are bad regulations.  If 66 other counties can manage their vehicles for hire, why can't our county commission?  For goodness sakes, the entire county commission makes up our entire Environmental Protection Commission aka EPC. One of the most compelling cases against the PTC was made by Rep. Grant when he pointed out that the PTC is accountable to no one.  Apparently the only way the PTC can be held accountable for bad, anti-free market, anti-competitive regulations is thru lawsuits.

So now there is a lawsuit filed by the Institute for Justice (IJ) regarding the burdensome $50 minimum charge to step your foot in a limo, whether your destination is 2 miles or 20 miles.  Yesterday IJ won their first hurdle when the judge dismissed the Motion to Dismiss" filed by the defendants as the Tribune reported


A limousine company and two limousine customers won the first round in their lawsuit challenging a $50 minimum fare rule set by the Hillsborough County Public Transportation Commission.

I caught the end of the hearing and an important piece of information not reported is there is a Motion to Intervene filed by Red Top Cab Company and West Coast Transportation Services doing business as West Coast Shuttle.  According to Sunbiz.org, the Florida Department of State Division of Corporations website, I did not find a West Coast Shuttle corporation registered but did find Red Top Cab and West Coast Transportation Services. Also registered is Yellow Cab Company of Tampa, Inc.  that has the same address and Registered Agent as the other two companies. Yellow Cab is one of the largest taxi cab services in Hillsborough county with exclusive access to TIA with United Cab. A hearing is scheduled with Judge Bergmann to hear this motion by the Interveners. Once again, regulatory capture was on display by the very special interests that the PTC regulates.

After the hearing, I spoke with the IJ attorney Justin Pearson. He was happy with the decision and stated,


"It's not against the law to give customers a better deal and be able to bargain for themselves.  The PTC agrees that it is against the law, but the judge agreed with IJ and has allowed the lawsuit to move forward. There was an agreement to dismiss the PTC chairman Victor Crist from the lawsuit but other than that change, the lawsuit will move forward in its entirety."

I asked Pearson what happens next and he explained


"Next is Discovery where both sides will be able to ask questions for information each side has. The interveners representing the taxi cabs and limos confirms the entrenched interests will use their own money to hire an attorney to intervene in a lawsuit to protect their entrenched interest. After Discovery will be a Motion for Summary Judgement."

The Eyes glad to see the lawsuit moving forward and we will be watching it as it does.

Let's regress for a moment.  At the local Delegation meeting, a John Madiedo spoke opposing the proposed bill to abolish the PTC. According the PTC's November 13 minutes, Madiedo is an insurance agent for Professional Insurance Center who states that he insures 70% of the public transportation vehicles in Hillsborough County. In addition, his business is located at 2003 W. Kennedy Blvd. Tampa, FL 33606. Guess where the PTC is physically located? According to the PTC website they are located at 2007 W. Kennedy Blvd., Tampa, FL 33606.  I found it interesting that they are located basically next to each other so searching for some additional information I found this article The Public Transportation Commission is under fire following indictment of former Commissioner Kevin White reported  by WTSP's Mike Deeson in 2011


The PTC rents its building from John Madiedo, who provides and does the insurance for the almost all of the taxicab companies the PTC regulates.

When Kevin White had his security firm, he rented the office next door from the PTC and Madiedo. However, since White left the space, it is being rented by Michael Moses. Michael Moses is the owner of the taxicab company that caused some controversy by loaning White the money to buy his new Riverview home.

We will continue monitoring reforms the PTC implements and perhaps a future state bill will stop the burdensome regulations.  According to this Times article


Rep. Grant and Senator Brandes said they now plan to pursue a statewide law. It would not seek to eliminate the PTC, but rather would ban what they see as transportation regulations that are anticompetitive and anti consumer.

"The biggest frustration today was that the narrative was framed that public safety and a competitive market can't coexist in Hillsborough County," Grant said. 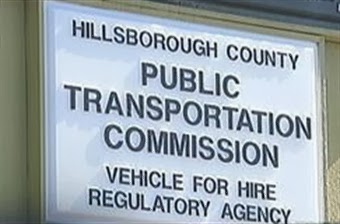 The PTC has been able to survive for 38 years because they are accountable to no one. That's why there has never been disciplined policies and procedures documented or enforced. That is indefensible after 38 years. The cronyism is deafening.  Also, it appears Hillsborough County provides much of the support structure already:

So why isn't the county simply managing the entire process so there's also accountability?

The real answer to reforming this captured agency is not maintaining the existing PTC and simply making changes to internal procedures. The answer is to get rid of it. Place the PTC's vehicle for hire responsibilities in a structure where there is accountability that does not enable corruption or unethical practices. The PTC is a case study for regulatory capture, an agency that appears to be run by the entrenched interests who circle their wagons at every opportunity to maintain status quo to protect their turf.

Let's put an end to this captured agency!
Posted by Sharon Calvert at 2:19 PM