A Reader's thoughts on Mass Transit and light rail 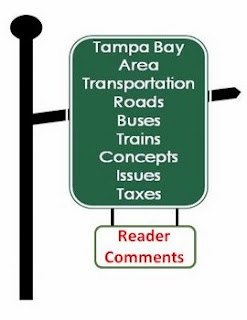 Transportation continues to be a major issue in the Tampa Bay Area. There have been multiple failed efforts to convince the public to tax itself for the development of transportation initiatives.

Here is an e-mail from a reader with a different view:

Read your post on the "Patch." My thought is that I would be willing to pay an extra 1% in sales tax to bring another form of mass transit to the area. I believe that it would benefit the local citizens by creating jobs, eventually relieving vehicle traffic, helping seniors get around (which provides a better mental health for the aging), it would create media attention to the area
which can be a boost to local marketing and advertising therefore stimulating the economy, and finally providing tourists with a way to see areas that they may not have if they just took a taxi from the airport to their final destination (again, a possible benefit to local businesses!

Let's say I spend $100 a week in purchases that are taxable. That means that i would be paying an extra $1 to help the local economy in a big way. Is that really that big of a burden for me?.... Absolutely not and I think that if the "Train" initiative was presented as only costing a $1 a week, (which is probably double what most people spend in taxable purchases, remember "real" food isn't taxed) that the vote would be to pass an increase in county tax!

All that people such as yourself seem to blog about is how these things are going to cost YOU and your like minded individuals. I ask that you take the time to think about and write about both sides of the argument. Think about how your $1 could actually help others! We as a community need to think not only about 1 year from now but 5, 10, 20 years from now! The last I heard, more people are moving into Florida than out of it.

Thanks for taking the time to read my opinion!
CV - Clearwater

You make a very good point.

The problem all along has been the bay area people behind light rail are mostly developers and real estate people. Their principal objective has been to use publicly funded light rail to start transit-oriented redevelopment of Pinellas County.

You only have to look at the meandering route of the failed GreenLight Pinellas effort to see this approach at work. The entire GreenLight effort focused on creating new centers of development and not on improving public transportation.

There was also no significant GreenLight effort to resolve the "last mile" issue.

This approach rarely works in the US.

If we had a serious transit plan that solved the "last mile" problem and put light rail where it would be effective I agree that the public would support it.

The CSX tracks offer a significant opportunity, but the "last mile" problem is huge in the CSX scenario.

Disclosures:
Contributor: Bob Gualtieri for Pinellas County Sheriff, Carlos Beruff for US Senate
Posted by Gene Webb at 5:00 AM