Local Progressive activist and transit advocate Tim Heberlein was part of the group who accosted and harassed Attorney General Pam Bondi recently at a movie theater in Tampa. As reported by this  Politico article


According to Bondi, she and a friend were confronted at least four times — while buying tickets, entering the theater, standing in line at the concession stand and then on their way out — and that activists were aggressive in each instance, with one yelling so loudly at her that he spit in her hair, either unintentionally or because he meant to expectorate on her. She said they also taunted her friend as “blue eyes” and asked him in a threatening manner if he was going to protect her, as though they wanted to fight.

In talking to POLITICO, Heberlein said he needed to be cautious about his remarks because Bondi is the “top law enforcement officer” in the state and she had called the actions of his group an assault. Earlier, to The Tampa Bay Times, he had more swagger: “If you refuse to meet with us, we're coming to where you're at. We're coming to where you're watching a movie or eating dinner.”

The Tampa Bay Times article about the incident, link also embedded in Politico article above has Heberlein's complete quote (emphasis mine):


Heberlein, who accused Bondi of refusing to start a dialogue with groups that work with at-risk communities like his, said he has no regrets about how the protesters acted.

Ironically, Heberlein had previously been lauded with this Meet Tim Heberlein — one of the “30 under 30″ rising stars in Florida politics


He has worked on legislative campaigns on the protection of Social Security and Medicaid, Senate Rules reform, Medicaid Expansion, and budget cuts; and now focuses his efforts on the Bay Area through amendment campaigns and local races. He organized the Awake Tampa progressive table, including an Awake the State rally in Tampa which was the largest of such in the state 3 years running.

I’ve [Heberlein] already worked on legislative campaigns ranging from the protection of Social Security and Medicaid, Senate Rules reform, Medicaid Expansion, the fight against state budget cuts and I am now focused on transit improvements in the Bay area.

Heberlein was previously associated with the Progressive Florida Consumer Action Group and was an ally and an activist member of the now defunct local transit lobbyist organization Connect Tampa Bay. They were advocating for another sales tax hike in 2013 and supposedly credited with the county commission creating the 2013 transportation initiative.

We all know how that transportation initiative started and ended. It started by inviting all the 2010 rail cartel cronies to their very first meeting and ended with the corrupt crony Go Hillsborough debacle under a law enforcement investigation. Unfortunately, while the sheriff's investigation admitted they were unable to get all the evidence they asked for, they refused to do a forensic investigation that would have led to capturing much more of the communication trail and the money trail associated with the crony effort.


Tim Heberlein is the Political Director for the Florida Consumer Action Network, and organizes his community to advocate for economic and social justice. His activism has focused on grassroots organizing and field campaigning for progressive issues and candidates.

He will also be a speaker for a national webinar in January focusing on assisting advocacy organizations in preparing for transit referendums.

Heberlein, representing the Young Democrats gave public comment at the public hearing the county commissioners held on May 13, 2010 regarding putting the 2010 rail tax on the ballot in support of the rail tax. He stated (emphasis mine):


MY NAME IS TIM HEBERLEIN, AND I'M THE VICE PRESIDENT FOR THE HILLSBOROUGH COUNTY YOUNG DEMOCRATS.THE YOUNG DEMOCRATS ARE IN FULL SUPPORT OF THIS INITIATIVE TODAY, AND — BUT THAT'S NOT THE POINT WHY WE'RE HERE. TODAY WE'RE MERELY TALKING ABOUT GIVING THE VOTERS A CHOICE….

The choice of the voters on a 14% sales tax hike for outdated costly rail boondoggles in 2010 was overwhelming defeat 58-42%. 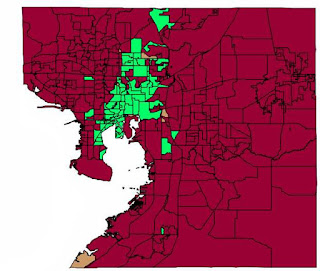 As the Time article above reports, Tim Heberlein and his band of screaming ranters were having a public temper tantrum yelling at Bondi "You're a horrible person" at a movie theater because they disagree with her politics.

Threatening to go after people in public places to engage them in abusive temper tantrums is unacceptable. Most people consider that kind of behavior to be "horrible".

Progressive activist and transit advocate Tim Heberlein is simply a bully not a "rising star".

And no such bullies should be dictating transportation policy in Tampa Bay.
Posted by Sharon Calvert at 7:00 AM