To Seek The Facts Skepticism and Curiosity Are Required 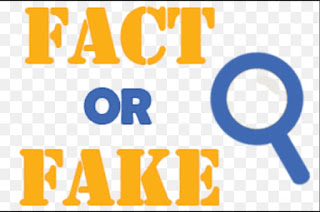 “Fact or Fake? Democracy depends on our ability to tell the difference”. It was with these words that Paul Tash, chairman and CEO of the Tampa Bay Times, summed up his commencement speech delivered at his alma mater (IU class of 1976) on May 5th of this year.

All in all, it was a wonderful speech. I do not agree with all the points in it, but I do not think there is an American or anyone who loves liberty who could argue with its thesis that we need to be able to tell fact from fake. Separate propaganda from truth in order to remain free.

To assist with this endeavor, Tash implores the graduates to continue their “curiosity” and “to borrow one of journalism’s core values: skepticism”. By this he means to take nothing at face value.

To drive the point home, Tash tells the audience the advice they give new reporters: “If your mother says she loves you, check it out”. Isn’t that what we want in our free press? We want them to be skeptical. We want them to doubt not only the rich and powerful but the unwashed masses also. In short, we want them to check everything out, investigate, exposes the falsehoods and above all present the truth about those things that affect us and our communities.

Isn’t this why we need a free press? Not to tell us what we want or play to our preferences or anyone’s preference, but the truth no matter how unpleasant.

Yes, it was a well written and thought-provoking speech. You can read it here.

I have just a few questions. Where were these platitudes at the Tampa Bay Times for the 6 months after delivering this speech? Specifically, where was the curiosity and/or skepticism in the Times coverage of the All For Transportation tax hike referendum effort?

I am not talking about the vote, passage or consequences of the County Charter Amendment, but the coverage and role the Times played in the dissemination of information or lack thereof on the issue. The Times gravely fell short in living up to the avowed “core principle” and noble calling of separating fact from fake news.

The Times did not look at assertions made by either side and refused to question any statements All For Transportation presented insinuating they were factual. The Times refused to confirm or disprove any statements from All For Transportation (AFT), no matter how exaggerated. The Times just continuously repeated AFT’s claims over and over again in news reports, columns and editorials as if they were stenographers for AFT talking points.

It was not a matter of difficulty to “check it out”. Almost all the claims made by ATF could have been easily evaluated as could those made by the opposition. The opposition informed the Times the tax would generate $16 Billion over 30 years yet they did not report that until after the election.

The Times was never skeptical about whether the tax could be used to build new roads or widen existing roads. When the Times reported that the tax was funding the Hillsborough MPO’s 2040 long range transportation plan (LRTP), the Times never questioned a thing about the outdated LRTP - the extra $800 million allocated to transit putting county and city road programs at risk or whether commutes would be longer or shorter (they will be longer).

All of the information was easily available to the Times and their journalists. The oppositions claims were rationalized away, disparaged and decided “not news worthy”.

Maybe not since Walter Duranty in the early 1930s has a US newspaper participated in such an overt propaganda campaign. The result was the voters of Hillsborough county had only a $4 million media blitz by AFT to determine the truth and the Times knowing how desperate we are to make things safer and county transportation better.

I am not referring to the multiple editorials supporting the sales tax because a newspaper, like anyone else, has a right to their opinion. I am referring to their reporting reflecting bias in their view.

It is a “core principle” in journalism to not allow bias to influence the pursuit of the truth and to always “check it out”. Sadly, that principle was not followed by the Times and bias effected the way truth was sought and reported in their “news” reports about the AFT tax hike referendum.

Why it happened is not as important as that it did happen. People are biased for all kinds of reasons and so are newspapers. But if democracy is at stake then both sides must submit and commit to seeking the truth, however unpleasant.

And yet the Times continues their course. They are derogatory to a sitting county commissioner because he had the audacity to ask for the court to clarify the referendum and yes possibly nullify the vote.

Does the Times know all the legalities involved with the referendum and ballot? Does AFT?

No elected governing body or government entity placed the AFT tax hike referendum on the ballot. It was never vetted by any attorney from the county, HART, or the municipalities who are the recipients of the funds with all the strings attached for 30 years.

The opposition raised questions but were ignored by the Times who refused to “check it out”. The Times just took AFT’s word on everything which was a disservice to the voting public.

All concerned parties should know exactly what they can and cannot do. By not being skeptical, the Times helped setup the position Hillsborough County is now in.

So, Mr. Tash, knowing our mothers love us, we will keep our guard up, and remember the advice to new reporters to be skeptical and “check it out”, even if our journalists won’t.

Our democracy depends on it.
Posted by Sharon Calvert at 3:03 PM