An Offer You Can't Refuse: Who is Peter Schorsch?

Mob and gangster movies are a dime a dozen. From The Godfather to Goodfellas, the genre has taken the U.S. by storm since the early 1900’s.

On a yearly basis, directors like Martin Scorsese churn out mafia sub-genre movies, allowing viewers to peer into a world of crime and corruption and fantasize about an underground world that revolves around power and persuasion.

While some autobiographical films touch on what really happened in the past, many are just speculative works that sprinkle in exaggerated death tolls. So it’s safe to say that these fantasy crime dramas are just that: fantasy. Right?

Well… not exactly. While the Corleones aren’t gunning down unsuspecting victims in crowded streets, there are real “crime lords” that are pulling the strings behind the scenes. One in particular, lives in Florida… 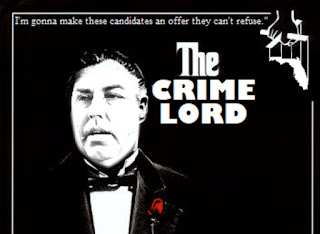 Peter Schorsch, Editor and Publisher of Florida Politics, is one of the Sunshine State’s most influential political players. He is the President of Extensive Enterprises and is the publisher of some of Florida’s most viewed influential websites. From his website to his magazine, the media mogul has carved out a niche for himself, and his platform is firmly solidified in Florida’s political arena (for now).

Politics is a messy game to begin with. No matter what side of the political aisle you’re on, at one point or another you will be forced to trek through the mud. But Peter Schorsch transcends the word “messy.” He’s nastier than Bill Clinton. More mischievous than Richard Nixon. Schorsch is what you get when you mix Lee Atwater‘s hardball tactics with Boss Tweed‘s unethical bookkeeping.

At this point you’re wondering, “where’s the proof?” I get it, it’s easy to right this off as a feeble attempt to paint Schorsch as something he’s not. But you don’t have to look long to find proof that this Tampa Bay writer cosplays as Gus Fring from Breaking Bad. Like a buffet on Thanksgiving, take your pick:
The list goes on and on with the pompous publisher.

And while we could write an entire article about his shortcomings and shameful actions, these pale in comparison to what truly makes this man a snake with lipstick.

Schorsch is known for many things: writing misleading stories, running political campaigns into the ground and not paying his reporters on time. But most of all, he’s known for “advertising,”

He may call it "advertising," but it doesn't make it right. It's like calling a prostitute an escort. It may help you sleep better, but your conscious isn't clear. In reality, it's nothing more than a pay-to-play money scheme that allows him wield power over officials in Florida.

Schorsch and company choose green over any partisan color. While it's evident that Schorsch adds his ideology in articles, it's his "generosity" that makes him public enemy number one. Florida Politics only cares about their bottom line. Want a story? They'll do it (but they may bury it if you have the wrong letter by your name). Need advertising for an upcoming election? You can have front page (right next to your opponent). Want him to compliment your campaign? Be prepared for him write a hit piece a day after he kisses your ass. Like a prostitute at the Red Light District, Peter Schorsch will give you whatever you want... as long as the price is right.

This salacious business model is nothing new. In fact, Schorsch has been doing this for some time now. Back in 2013, Schorsch was criticized and questioned for his "cash for coverage" scheme. No charges were filed against Schorsch after an investigation was conducted. While Schorsch's tactics were absolved, the question still remained: is Schorsch the ethical, award-winning journalist he claims to be?

Questions surrounding Schorsch continue to linger. In 2017, Nancy Smith wrote an article for Sunshine State News attacking Schorsch's integrity. Likewise, politicians around the state continue to complain about his methods and the stranglehold he has on the press in Florida, Many are afraid to speak out, fearing that Schorsch will retaliate, derailing their campaign. Even writers who were once employed by Florida Politics grumble, citing wage disputes and issues with Schorsch's immense workload. Such actions have caused many reporters to leave in the past.

Here’s a great example of Schorsch-inspired propaganda with total disregard for the facts. This fictional hit piece was written by Janelle Irwin, a pseudo-journalist hired by Schorsch. She joined Florida Politics last fall with the expressed purpose of promoting a regressive transit tax. More on that later.

Irwin’s intent was to marginalize No Tax For Tracks (NTFT), who opposed the All for Transportation (AFT) transit tax hike. Irwin never contacted Sharon Calvert, treasurer and spokesperson for NTFT, before publishing her garbage. In fact, Irwin never contacted anyone else associated with the No Tax for Tracks PAC about the faux article.

According to Calvert, Irwin:

—Uses guilt by association to falsely accuse NTFT of being a Tea Party group. But Irwin fails to accuse AFT of being a special interests group run by wealthy donors that includes Lightning owner/Water Street developer Jeff Vinik, the Tampa Bay Partnership, its associates, and many of the same wealthy people who were pushing a new Rays stadium in Ybor City.

—Twists the truth to discredit NTFT’s claim that AFT’s tax hike will raise $16 Billion over 30 years. She either ignores or does not know how to calculate revenue growth which is based on both population growth PLUS inflation, which is how the Hillsborough MPO calculated a 1% tax would raise $9 Billion over 20 years. Even the Times admitted NTFT was right.

—Avoids referring to the actual AFT charter amendment because the only place where new automobile lane capacity is referenced in AFT’s document is where they specifically prohibit funding it. By the time Irwin mocked NTFT’s claim that there were no funds dedicated to new road capacity in AFT’s tax hike, AFT had already admitted that by claiming funds somewhere “could” [or could not] be used for new roads.”

Basically, the Irwin story was a promotion for Vinik’s All For Transportation PAC.

A reliable source has told RoundTable Politics that Irwin collected $75,000 from Florida Politics to promote the Vinik sales tax under a six-month contract. It can be fairly surmised that Vinik paid Schorsch approximately double that amount to bombard his blog with pro-transit tax propaganda.

There's no doubt that Florida Politics is a big deal. They've amassed a large following, and many regard them as the go-to when it comes to the news. Voters, officials, and businesses line up to get taste – although they don't realize they're eating out of the palm of Schorsch's hand.

If Florida transformed into the world of Star Wars, Florida Politics would be the Cartel – underhanded, immoral. and hellbent on earning money no matter the cost. By default, Schorsch would be the Cartel's leader, Jabba the Hutt. Like Jabba, Schorsch rules with an iron fist. He imprisons those he employs and offers hits on those who don't adhere to his scheme.

For years, Schorsch the Hutt has had his way with Florida. He's used the people and politicians, degrading his outlet in the pursuit of an Imperial Credit. He's issued bounties on his enemies, eventually feeding them to his Sarlacc. With no end in sight, it looked as if Schorsch would rule the galaxy. Luckily for Florida, your Han Solo has arrived.

Peter Schorsch is a modern day racketeer who uses his influence to scare politicians and the business community into "advertising" with him. He uses his articles and employees to write hit pieces on people who trusted him. When he's not trying to erode the world of politics, you can find him feeding his consigliere, Anthony Pedicini, dirt to throw on officials across the state.

Unfortunately for Schorsch, I'm here to call out his depraved tactics. And like Han Solo, I shoot first. 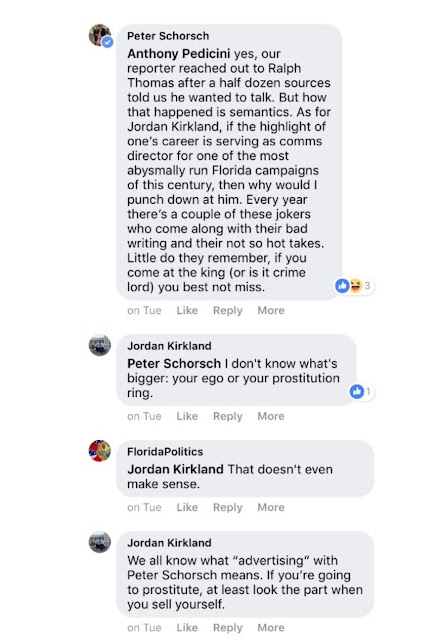