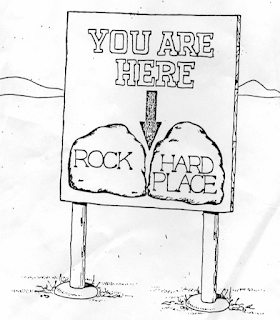 The All For Transportation (AFT) tax hike may turn into one of the biggest scams ever perpetrated on Hillsborough County voters and taxpayers.

We predicted the AFT would create a big mess and more evidence of that played out at a Hillsborough County BOCC workshop held February 21, 2019.

The workshop to discuss how the county could spend $110 million of new AFT tax proceeds quickly turned into a debacle. The commissioners darted in all directions when confronted with the reality the $16 Billion AFT tax hike does not fund new road capacity in Hillsborough County for 30 years.


These commissioners knew this issue before the election. Except for Commissioner White, they all ignored the issue and did not properly inform the voting public. That is incompetence.

Now some of these same commissioners want to raise the local gas tax.

Note: Oversight committees are created to review, analyze, survey, monitor or make recommendations but are not created to have approval/disapproval authority. This committee was misnamed and should be called the Unelected Bureaucrat's Approval Committee.

John Lyons, who oversees the county's Public Works department, began his presentation and the workshop started going downhill. Lyons presents how 85% of the $110 million the county would receive this year would fund maintenance, safety and some intersection improvements for existing roads and fund new bike paths and sidewalks.
Lyons states Hillsborough County is 1231 square miles of which 1000 of those miles are located in unincorporated Hillsborough County. Lyons tried to make lemonade out of lemons but his wordy fluff could not cover the reality of the bad policy the AFT tax hike is.

There are some nuggets from this workshop that are interesting.

Commissioner White immediately pointed out that AFT specifically restricts or prohibits any funds in the top 4 categories (of the slide above) from being used for new roads or adding new road capacity. White tells the commissioners that only the last category "Remaining" funds "could" be used to fund additional lane capacity or road widening.

White provides a public service by informing the public at this workshop that the $16.5 million of the "Remaining" funds could only fund one-half to three-quarters of a mile of added lane capacity a year. And that is IF the county used every penny of their Remaining funds on new road capacity. AFT intentionally allows these remaining funds to be used for any transportation project including transit.

White tells his peer commissioners they must be transparent, especially to their constituents in fast growing unincorporated Hillsborough, where 2/3 of the population of the county reside. All the commissioners must be honest to their constituents about how AFT, a political committee funded by downtown special interests and accountable to no one, specifically restricts how they decided to appropriate the tax hike proceeds.


SO FOR EVERY COMMISSIONER AT THIS DAIS, THAT'S ACCOUNTABLE TO CITIZENS IN EXPLODING SUBURBAN AREAS OF THIS COUNTY, I JUST WANT YOU TO BE AWARE OF WHAT THIS MEANS, AS A MATTER OF POLICY, AND WHEN YOU'RE OUT SPEAKING TO RESIDENTS, IN SUBURBAN, UNINCORPORATED HILLSBOROUGH COUNTY, YOU KNOW, MAKE SURE THAT THERE'S COMPLETE TRANSPARENCY IN THE SENSE THAT, FOR THIS SALES TAX THAT COULD RAISE AS MUCH AS $15 BILLION IN 30 YEARS.

300 MILLION IN A YEAR, AS I UNDERSTAND IT, $16.5 MILLION CAN GO TOWARDS ADDED LANE CAPACITY.

SO I'M NOT GOING TO SUGAR COAT THIS, CITIZENS IN THE UNINCORPORATED AREAS OF THE COUNTY WERE LED TO BELIEVE THAT THIS WOULD DELIVER ADDED ROAD CAPACITY. I SAW THE CAMPAIGN FOR IT.

TWO‑THIRDS OF THE PEOPLE OF THIS COUNTY THAT LIVE IN UNINCORPORATED HILLSBOROUGH COUNTY WILL BE PAYING THIS $300 MILLION PER YEAR, $15 BILLION TAX AND IT'S RIGHT HERE, RIGHT HERE ON THIS TABLE,
NO ROAD CAPACITY.

THAT IS NOT WHAT THE RESIDENTS OF UNINCORPORATED HILLSBOROUGH COUNTY BOUGHT INTO.

AFT's $4 million marketing campaign claimed their tax hike was "fixing" roads, reducing congestion and ensuring everyone's commute time would be reduced so they would get home for dinner quicker - for 30 years. AFT provided no evidence to back up their exaggerated false claims.

In reality, the AFT tax hike is a transit tax to force county taxpayers to spend $7-8 Billion on costly transit in the city of Tampa and prohibit and limit the funding of new road capacity - for 30 years. AFT's marketing campaign, funded by special interests who will benefit from the transit tax, was a deceptive and misleading facade.

All of these commissioners and county staff knew this. But all of them except Commissioner White went along with AFT's charade.


No wonder the discussion at this workshop went downhill.

Commissioner Overman, who is not a traffic engineer, said "it would be a wise idea for the individuals that need to understand transportation planning what additional capacity means….you actually can create the goal or achieve the goal of congestion reduction without adding lanes to the process."

Overman fails to acknowledge timing of lights and some intersection improvements may increase some throughput on existing roads but they will never relieve traffic congestion for a county that expects 700K or more residents over the next 30 years - not including more tourists. Overman is not being truthful but she is being condescending to her constituents, especially those in unincorporated Hillsborough.

AFT's tax hike ballot summary language clearly states the tax hike will fund projects to "improve roads" as if that is the tax hike's top priority. Common sense and normal assumptions dictates that includes funding new road capacity especially when "improve intersections" is also included as a separate funding category.
All these commissioners and county staff knew the fine print in AFT's 5 page charter amendment specifically prohibited funding new road capacity and severely limited any of the $16 Billion being used for new roads or road widening. They refused to inform the public.

Facing reality there is no new road capacity funding for 30 years in the $16 Billion AFT tax hike, Commissioner Murman brought up raising the local gas tax. Overman and Commissioner Smith, both supporters of the AFT $16 Billion tax hike, agreed they want to raise the gas tax.

Astounding! Taxpayers are handing over $16 Billion of new AFT tax hike proceeds for transportation and some commissioners now want to raise the gas tax because the AFT tax hike does not fund new road capacity.

Why didn't these commissioners tell their constituents this before the election?

Commissioner Smith chimed in she thinks voters voted to put massive amounts of new tax dollars (about $7-8 Billion) to pay for costly transit and not to fund new roads. What evidence is there of that attitude? AFT's $4 million marketing campaign focused on "fixing" roads. Did Smith tell her voters that the vast majority of the transit funds that will be spent in the city of Tampa will be paid for by taxpayers in unincorporated?

According to Smith, instead of road widening the county needs to focus on getting some cars off the road. She prefers pursuing another CSX/SunRail SunFail commuter rail. Smith fails to state what a fiscal failure SunRail is with ridership so bad its fare box recovery only covers 5% of its operating costs - meaning taxpayers are subsidizing the other 95%. SunRail's farebox does not even cover the cost of its ticketing system. SunRail is one of the most accident prone rail systems in the country and it has only been in service since 2014.

The most disturbing comment came from the BOCC Chair Commissioner Miller:

THE FACT OF THE MATTER IS IT PASSED.

Miller, a former state legislator, apparently does not care whether voters knew what they were voting for or whether what voters were voting on was all legal. The only thing that matters to him is the $16 Billion tax hike passed.

When the end justifies whatever means, there will be problems.

WE'RE JUST KIND OF BETWEEN A ROCK AND A HARD PLACE.

Why weren't voters and taxpayers told this before the election?
Posted by Sharon Calvert at 11:42 AM