FDOT Public Hearing on I-275 in St. Petersburg

The Florida Department of Transportation held a public hearing for the planned improvements of I-275 in Pinellas County on September 24, 2019. Details of the plans can be found here, which encompass improvements to I-275 from 54th Avenue South north to 4th Street North in Pinellas County. This was the public hearing for review and comment for the Project Development and Environmental (PD&E) study conducted for the 16.3 mile corridor. Operational improvements, location, design, social, economic and environment impacts of the improvements were analyzed in the study.


There have been ongoing studies on this section of I-275.  This PD&E assessed the repurposing of one of the two approved express lanes to accommodate the provision of three general use through lanes, one auxiliary lane, and one express lane in each direction from Dr. MLK, Jr. Boulevard to north of 4th Street North of the study corridor.

FDOT is also currently conducting this Design Change Re-evaluation to assess the impacts of accommodating the addition of two express lanes on I-275 in Segment B from north of I-375 to south of Gandy Boulevard and the addition of a second express lane in Segment C from Gandy Boulevard to north of 4th Street North. These proposed improvements would tie-in with planned improvements to the Howard Frankland Bridge. Additional improvements in ramps, bridges, trail connections, drainage and stormwater requirements are also in scope.

The biggest changes are the addition of managed lanes for capacity improvements for Segment B & C as referenced in the map above. This will align this section of I-275 with the planned managed lanes FDOT plans for the new Howard Frankland Bridge the Gateway project.

The managed lanes do not appear to be be planned for the southernmost section A, which will mostly improve needed lane continuity.

The changes are not yet imminent as further approvals and funding will be required. FDOT has outlined a 5 year work program and developed cost estimates.

The good news is FDOT is getting ahead of the future congestion on this stretch of I-275 in Pinellas County. Although note most work won't start until 2022, and some of it is currently unfunded. It is not yet totally unmanageable, and there is time enough to fix the issues and plan for future capacity needs before it turns into a congested mess.

Additionally, FDOT already has substantial right of way supporting this project. 28 parcels are affected, and 16 homeowners may require relocation. No businesses are impacted. Some homeowners unfortunately are affected, yet right of way acquisition will be minimal for this type of project.

The costs are relatively manageable as well, as FDOT estimates at $390 million for the 16.3 miles of highway. Compare that to the billions being discussed in Hillsborough for TBNext and the Howard Frankland Bridge or being spent in Orange County for I-4 Ultimate, and this Pinellas project looks cheap. 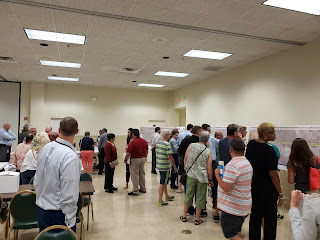 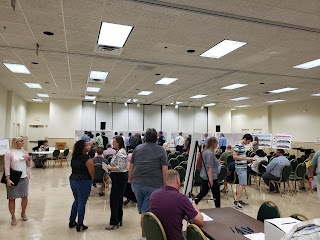 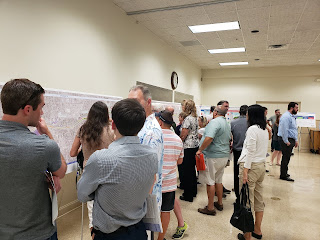 The hearing was well attended, over 100 people were present. Only about 10 people spoke publicly (including us). We were expecting some organized turnout against the project driven by transit activists on social media, but it did not materialize. Yes, a couple of speakers did mention transit. One from Seminole, who stated he only heard about the project a couple of hours ago on Facebook and decided to take off from work to share his wisdom regarding transit and the maladies of highways. Another from Palm Harbor who stated he rarely uses this section of I-275, yet made several comments how the FDOT engineers were screwing things up.

Of course, some folks on social media get spun up anytime improving roads is discussed. Some examples:


WTF is happening to St. Petersburg?! First the supposed liberal mayor and council allow luxury condo after luxury condo and high end apt after high end apt, pricing out low income people. Now we have to pay a toll too? They're all DINO's

Why doesn't FDOT try a new approach - ask for widened lanes in conjunction with a rail line that connects St. Pete and Tampa and along the way connects Westshore, TIA, Clearwater Airport, Gateway district....

We have been demanding for four years now that they spend the BILLIONS they seem hell bent on plowing into highway widening and toll lanes into purchasing the CSX tracks instead (already in place, plenty of right of way)

No way! this Must be disrupted!

Isn't St Pete run by self described "progressive" politicians, who support things like fighting climate change, reduced pollution, equitable mobility and so on? But yet the city's leaders also support FDOT's scheme to further bisect the city by paving toll lanes from one end of it to the other?

Instead, there were several speakers representing impacted residents most concerned about the retention ponds affecting their homes and neighborhoods. Surprisingly, these comments appeared to be the most concerning issues raised by the speakers. Some of the speakers mentioned they are having ongoing discussions with FDOT on alternatives to minimize the impacts to their neighborhoods.

In a sidebar conversation with FDOT representatives during the open house portion of the event, EyeOnTampaBay confirmed the retention ponds are a concern with many residents, and FDOT is in discussion with the Southwest Florida Water Management District regarding additional alternatives.

Listen to the public comments below:

The Times reported as well.


The conversation Tuesday was similar to one that has raged in Tampa’s urban neighborhoods since 2015, when transportation officials first started talking about taking homes in order to widen the highway with tolled lanes.

We wonder if their reporter may have been at a different meeting.

We did not witness any rage or urbanists fixated on destroying the highway as we've seen in Tampa. We did hear residents concerned about the impact of their neighborhoods, particularly regarding the additional drainage ponds. There was little political or angry discussion in the public comments aimed at FDOT questioning their motives or integrity, which has been all too common in Hillsborough County.

In fact, the Times seemed to backtrack.


But there’s a striking difference: when asked, many of the nearby home owners said they would use the toll lanes once they open.

“I think there’s a need for it,” homeowner Kevin Wence said. “I’m not faulting the changes to the interstate. I’m faulting the fact that there’s alternatives without affecting homes and costing the taxpayers.”

“Unfortunately, to my own detriment, it makes sense,” she said.


Multiple residents of the Sawgrass Lake Estates mobile home park said they were concerned about taking homes for the plan and suggested that FDOT should instead consider taking land elsewhere.

FDOT did not respond as the public voiced their opposition.

Again, selective reporting, as there were speakers in support of the project that TBBJ chose not to acknowledge. Insinuating FDOT is uncaring, FDOT public hearings are intended for the public to have their say, not for FDOT to defend and publicly argue with residents. Many FDOT representatives, including FDOT District 7 Secretary of Transportation David Gwynn,  were present during the open house portion of the hearing and available for the public to discuss in detail their concerns, which we were able to take advantage of.

It's as if the media has something against improving road capacity in Tampa Bay, looking to create more conflict that truly exists, continuing a narrative against roads and for transit. When most people are frustrated that roads suck and no one does anything, well, we get ignored. When a project finally looks like it will do some good, relatively inexpensively (clearly not cheap either), with minimal impacts to residents and the environment, the media seeks to create conflict.

Yes, this plan does involve tolls for the managed lanes. However, it does not reduce the toll free general access lanes, and improves other aspects such as lane continuity throughout the corridor. The truth is, most of the time the managed lanes will be low cost and perhaps free during non-rush hours, which is not unusual in South Florida. Those scary $10 - $15 tolls that opponents raise conveniently avoid stating they are typically for 10 - 20 mile segments of highway. If it saves 30 minutes or an hour stuck in traffic, that's a good deal for a lot of drivers. These lanes can also be utilized for express and commuter bus services, increasing mobility for transit dependent and transit choice riders, providing much improved transit service over what is available today. Additional capacity for evacuation is also another needed improvement.

The real question is would you rather have toll roads or no roads? That's the reality we are dealing with now. Gas tax revenue is decreasing, and increasingly siphoned off to fund transit, trails and sidewalks. Sure, we'd rather not have to pay tolls, but that's not reality. Just as transit should pay its way, so should roads and drivers.