As Rep, Devin Nunes revealed in this article by RedState, the “Ukraine hoax started literally the day after Robert Mueller testified that the Russian hoax was deader than a door-nail.”

In December 2014 Congress passed the Ukraine Freedom Support Act of 2014 that included military aid to Ukraine and appropriated hundreds of millions of dollars for that aid from 2015 thru 2017.

Obama embargo'd the military aid Congress had authorized in a bipartisan vote and refused to send Ukraine the military aid. Instead Obama sided with German Chancellor Angela Merkel to continue "status quo" diplomatic efforts to contain Russia in Ukraine.

Germany is the largest buyer of Russian natural gas from the Russian state owned energy company Gazprom. Hmm…..Perhaps Chancellor Merkel did not want to ruffle Putin’s feathers and cause any risk to Germany’s natural gas supplier.

We remember all the media outrage when President Obama refused to send the military aid to Ukraine as Russia invaded Crimea right? How many Ukrainians perished due to Obama's embargo?

Obama has a history with Ukraine too, back to 2005 when he first became a Senator. According to this 2014 Daily Mail article:

As a U.S. senator, Barack Obama won $48 million in federal funding to help Ukraine destroy thousands of tons of guns and ammunition – weapons which are now unavailable to the Ukrainian army as it faces down Russian President Vladimir Putin during his invasion of Crimea.

From the Atlantic & the Brookings Institute on Obama Ukraine doctrine (emphasis mine):


Barack Obama suggested that defending Ukraine against Russia wasn’t a core U.S. national-security concern—and that even if the United States did have interests in Ukraine, Russia had more, meaning that Moscow would always be willing to do more than Washington to keep Ukraine within its sphere of influence. As Obama told The Atlantic’s editor in chief, Jeffrey Goldberg, at the end of his presidency, “The fact is that Ukraine, which is a non-NATO country, is going to be vulnerable to military domination by Russia no matter what we do.


Ukrainian government officials tried to help Hillary Clinton and undermine Trump by publicly questioning his fitness for office. They also disseminated documents implicating a top Trump aide in corruption and suggested they were investigating the matter, only to back away after the election. And they helped Clinton’s allies research damaging information on Trump and his advisers, a Politico investigation found.

Telizhenko, the former embassy staffer, said that, during the primaries, Chaly, the country’s ambassador in Washington, had actually instructed the embassy not to reach out to Trump’s campaign, even as it was engaging with those of Clinton and Trump’s leading GOP rival, Ted Cruz.

“We had an order not to talk to the Trump team, because he was critical of Ukraine and the government and his critical position on Crimea and the conflict,” said Telizhenko. “I was yelled at when I proposed to talk to Trump,” he said, adding, “The ambassador said not to get involved — Hillary is going to win.”

It was Trump who lifted Obama's Ukraine military aid embargo in 2018 and sent Javelin anti-tank missiles to Ukraine in March 2018.

The Ukraine elected a new President Volodymyr Zelensky in April 2019. Zelensky is a former comedian and an untested leader of his policies toward Russia. There has also been questions surrounding Zelensky's relationship with Ukrainian oligarch Igor Kolomoisky (who helped make Zelensky a TV star) as reported by Politico in April 2019.

In May 2019, Ukraine confirmed that an investigation remained open regarding theft and embezzlement of government funds by the founder of Ukrainian energy company Burisma Holdings, Mykola Zlochevsky.

Zlochevsky had served as Minister of Ecology and Natural Resources from 2010-2012 and deputy secretary for Economic and Social Security on the National Security and Defense Council from 2012-2014. Zlochevsky was a minister in the deposed pro-Russian government of Viktor Yanukovych elected in 2010. Yanukovych is widely criticized for massive corruption and cronyism and he fled to Russia after he was ousted in 2014.

VP Joe Biden's son, Hunter Biden, was announced as a Board member of Burisma Holdings in May 2014 and $83K a month payments started flowing to Hunter Biden. Burisma also began payments to retain the law firm Hunter Biden works for, the Boies Schiller law firm.

In 2014, the Washington Post weighed in about Hunter Biden's Burisma appointment:

The appointment of the vice president’s son to a Ukrainian oil board looks nepotistic at best, nefarious at worst,” it wrote, shortly after Hunter Biden’s appointment. “You have to wonder how big the salary has to be to put US soft power at risk like this. Pretty big, we’d imagine.

Yep! $83K a month is how big - plus hundreds of thousands of dollars to retain Hunter Biden's law firm.

The corruption in Ukraine for decades is well known. In 2015, the US State Department partnered with [corrupt] billionaire George Soros, who bankrolls Leftist causes, Leftist protests and Leftist candidates around the world, to fund "anti-corruption" activities in Ukraine. (Really…)

Soros pursues his "stateless" foreign policies by opening nonprofit Foundations in countries all over the world to influence and push his "Open Society" policies. He opened a Washington DC office during the Clinton Administration where Soros began his relationship with the Clintons. Soros supported Hillary and was one of her biggest donors in 2016.

Soros is a transactional meddler (ala quid pro quo) who "meddles" in other countries elections. After the fall of the Berlin wall it was Ukraine where "he has been able to exert influence at the highest levels of the government to see his ideas implemented".

Soros makes no bones about the interventionist nature of his role in Ukraine. At one point, he remarked, jocularly, “If this isn’t meddling in the affairs of a foreign nation, I don’t know what is!”

As reported here and here, it appears the Obama Admin was meddling in Ukraine's 2014 elections as Biden was Obama's point man on Ukraine.

The Guardian reported at length in 2017 how the UK tried to freeze $23 million of assets linked to corruption in Ukraine in 2014. The $23 million were in bank accounts of 2 companies controlled by Mykola Zlochevsky - founder of Burisma Holdings.

The UK case fell apart when a senior official in the Ukrainian prosecutor's office sent a letter to the Judge stating "Zlochevsky was never named as a suspect for embezzlement or indeed any other offence, let alone one related to the exercise of improper influence in the grant of exploration and production licenses”. In 2015, the Judge unfroze the $23 million and handed it back to Zlochevsky. It was reported that bribery was used to get a Ukrainian prosecutor to send that letter. It was also reported Zlochevsky moved the money to Cyprus.

In 2015, the New York Times reported about the case with then US ambassador to Ukraine calling out Zlochevsky by name:

“In the case of former Ecology Minister Mykola Zlochevsky, the U.K. authorities had seized $23 million in illicit assets that belonged to the Ukrainian people,” Mr. Pyatt said. Officials at the prosecutor general’s office, he added, were asked by the United Kingdom “to send documents supporting the seizure. Instead they sent letters to Zlochevsky’s attorneys attesting that there was no case against him. As a result, the money was freed by the U.K. court, and shortly thereafter the money was moved to Cyprus.”

In February 2015 as Obama embargo'd military weapons to Ukraine, Fiona Hill who at that time was the director of the Center on the United States and Europe at the Brookings Institution, wrote an op-ed in the Washington Post arguing against providing lethal weapons to the Ukraine.

Suddenly during the impeachment hearings, Hill testifies she was concerned that a short hold on aid to a newly elected Ukrainian government untested on their policies towards Russia would endanger Ukraine's safety and security. What chutzpah and deafening hypocrisy!

Let's ask again - how many Ukrainians perished during all the years Obama embargo'd the lethal weapons authorized by Congress to Ukraine?

A Ukrainian anti-corruption nonprofit, AntAC, was set up and funded by the US and a Soros Foundation. (Really…)

Surprise! Much of the money could not be properly accounted for - corruption from those being paid to fight corruption.

According to this article from John Solomon of The Hill, Ukrainian prosecutors were trying to investigate AntAC in 2016 to determine if millions of US dollars to fight corruption in Ukraine had been improperly diverted…investigating the corruption of the so-called anti-corruptors.

The [Ukraine] prosecutors soon would learn the resistance they faced was blowing directly from the U.S. Embassy in Kiev, where the Obama administration took the rare step of trying to press the Ukrainian government to back off its investigation of both the U.S. aid and the group.

Tidbit: Individuals from Ukraine became the largest source of foreign donors to the Clinton Foundation from 1999-2014 according to an analysis done by the Wall Street Journal. 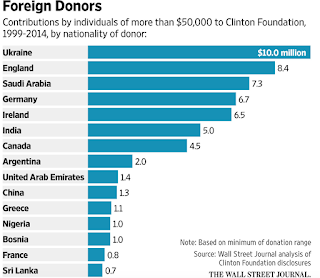 It has been reported that Ukraine has widened its investigation of Burisma founder Mykola Zlochevsky who is reported to now live in super duper wealthy Monaco.

Investigative reporter John Solomon has been investigating Ukraine for a very long time. Here is one of his latest: The Ukraine scandal timeline Democrats and their media allies don’t want America to see

Ukraine has been a hot bed of corruption for decades and meddling in its politics have gone on for a very long time. As the January 2017 Politico article above reported, Ukrainians were meddling in our 2016 election in support of Hillary.

This Real Clear Politics post from October reveals the relationship of the Democrats Russia hoax to the Democrats Ukraine hoax. A cabal of many of the same people are involved in both.

Lots of US dollars given to Ukraine have gone down a rat hole enriching someone(s) pockets and bank accounts. The corruption is so deep in Ukraine it is hard to know who is telling the truth, especially with a new President.

It makes perfect sense to want to ensure new Ukraine President Zelensky, who ran as an anti-establishment outsider, was going to do what he ran on to clean up Ukrainian corrupt politics.

Lots of failed promises have been made and the prior Ukraine President Poroshenko was unable or unwilling to tackle corruption. Any President should be concerned about US handouts to an untested new Ukraine President in a country fraught with corruption. The US is the largest provider of military aid/equipment to Ukraine and Trump wants Europe to contribute more military aid to Ukraine - considering Europe's proximity to Ukraine.
We cannot forget that a comprehensive treaty agreement for cooperation between both the United States and Ukraine in the investigation and prosecution of crimes was signed by President Clinton in 1999. Trump trying to get to the bottom of the long-standing corruption in Ukraine that allegedly involves powerful Democrats such as Joe Biden is following the very law signed by President Clinton.

Ukraine got the military weapons…from the Trump administration which Ukraine never got from the Obama/Biden administration. The hypocrisy of Biden attacking Trump for a temporary delay when it was on his watch the US refused providing the lethal aid to Ukraine is beyond belief. Biden is trying to erase his own past.

However, Biden may not be able to erase his past.

As new media narratives must be created against Trump, the Democrats and their parroting media propagandists ignore history and ignore their own previous reporting as if it never happened. They must ignore the past to distort and obscure the truth.

Lets scrutinize history instead of letting the Democrat Press use Orwellian "Doublespeak" to rewrite history.

Start with Trump releasing this boatload of documents!
Posted by Sharon Calvert at 9:51 AM