AFT's ballot summary language, the only information every voter was guaranteed the opportunity to read before they voted, told voters the AFT transit tax was to fund expanding transit options and enhancing bus services by HART. The Ballot language states nothing about the new transit tax funding HART's current and existing services that are already funded by HART's property taxes.
According to HART's 2020 budget, HART receives about $48.5 million in property tax revenues, which overwhelmingly comes from those who reside in unincorporated Hillsborough. That amount is an increase of almost $14 million over HART's property tax revenues of $34.8 million just 5 years ago in 2016. HART has been receiving an almost 8% per year increase in property tax revenues over the last 5 years.

Before the AFT transit tax, with the property tax revenues, fare-box, state and federal operating grants and advertising, HART's operating budget was approximately $84 million in 2020. In addition HART expected in 2020 to receive another $38 million in capital revenues from the Feds, FDOT and Hillsborough County mobility fees.

HART was compelled to submit a so-called spending plan to the All for Transportation Independent Oversight Committee (IOC) last September. This spending plan is for Calendar Year 2020 which includes 2 years of AFT transit tax proceeds.

HART submitted a document outlining how they will spend $253 MILLION of the expected first 2 years of AFT transit tax proceeds. HART's spending document, which is really a framework of spending buckets, can be found here.

Let's take a closer look at how HART plans to spend $253 MILLION of new found monies.

Twenty percent or $50.6 MILLION is dumped in a bucket called "Other". This "Other" bucket is where HART is funding existing services currently funded by HART's property tax revenues. "Other" is nowhere to be found on AFT's Ballot Summary language.

Over $88 MILLION is Unallocated because HART has no fixed guideway projects.

Almost $6.4 MILLION spent on Planning. These new millions will enrich the consultants and explode the bureaucracy.

Remember voters were told by AFT the transit tax was funding new and enhanced transit options.

Out of $253 million of new AFT transit tax revenues, HART plans to spend only $5.5 million to restore some services previously cut and increase frequency for about 4 existing routes.

$46.2 MILLION is spent on new vehicles, including $10 MILLION for 10 electric buses, $8.6 MILLION for 16 new Compressed Natural Gas (CNG) buses and $21.6 MILLION to replace 40 diesel buses with CNG buses. All this spending is considered "Enhanced Service".

Obviously CNG buses are HALF the capital cost of electric buses. And according to this CNG - Electric bus comparison presentation to HART in 2017, CNG buses cost less to buy, maintain and operate. 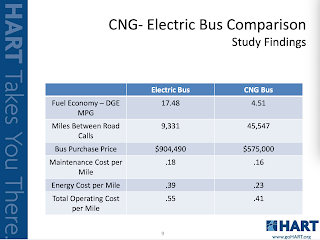 When HART has a windfall of $140 million a year of new transit tax proceeds, the cost of anything becomes less relevant.

About $40 MILLION will be spent on a new maintenance facility for HART which is needed.

An additional $13 MILLION will be spent on Administration. This bloating of the bureaucracy includes $8 million of pay raises/increased labor costs we assume also includes benefits and pension costs. This new baseline of administrative costs will keep going up and will have to be sustained into perpetuity.

Voters were not provided any of this spending information by AFT or HART in 2018.

Is this what voters voted for?

Posted by Sharon Calvert at 5:47 PM