It appears Overman has a persona she thought was hidden behind a "Private" Facebook group.

This is a much older post on that page from Overman that reflects she has a history of being condescending and derogatory on the "Uncensored" Facebook page.

The Uncensored's new banner is the Asian Giant Hornets. 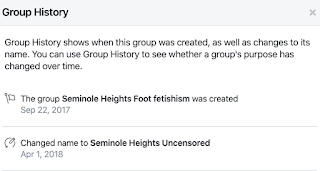 Overman took to the "Uncensored" Facebook page after our post. Below are a few of her comments from a thread she instigated. Matt Hughes is one of the administrators of the Facebook group. 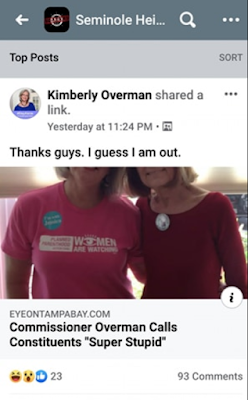 The only person who "outed" Kimberly Overman was Overman - no one to blame but herself. Anyone with any sense knows a group that has almost 3500 members is anything but 'Private". She obviously does not know her own "Private" group. 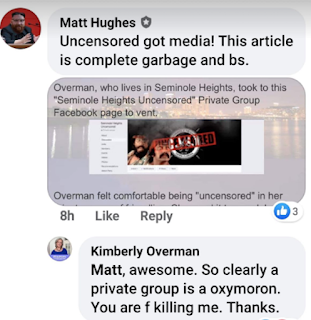 Overman has made other claims that are not true.

According to this Tampa Bay Guardian post, a public records request was made December 5, 2018 directly to Overman to provide a copy of any records to support her "vetted" claims. Twenty-three days later, on December 28, 2018, Overman and the county finally responded there were no such records. As the Tampa Bay Guardian reported:


Overman has no evidence to back up her claim and thus made no effort to independently verify AFT’s claim which she parroted.

Apparently, Overman will make stuff up to fit her own narrative.

The Eye was opposed to the AFT rail tax not just because it is a rail tax boondoggle, but also because we warned that the $16 Billion tax hike referendum had serious legal issues. Florida Statute 212.055 clearly states the county commission has appropriations authority not the political committee All for Transportation.

Overman helped create the big AFT legal mess and now whines that the Florida Supreme Court may "decide the 2018 votes didn't matter". Voters must never be subjected to an illegal and unlawful tax hike referendum but Overman thinks the end justifies the means. Her transit ideology trumps everything.


With this latest debacle, Overman asked her "Uncensored" Facebook minions to go to her personal Facebook page and defend her because "this group knows how to call someone on their 'stuff'".

Is this how county commissioners should react or behave? This is not governance, this is Overman's instigating activism to go after those who disagree with her.

One of Overman's "Uncensored" followers posted this comment on the thread she instigated about our previous post.

We take any sense of a threat to myself or my family seriously. We will always weigh our options when confronted with any threat.

No elected official should instigate anyone to incite violence, resort to bully tactics or to troll people with vile language. Any elected official who does is discredited and should be ostracized.

Overman should remember that when she points fingers at her constituents and calls them "super stupid", there are three fingers pointing back at her.

Overman does not understand her full constituency. Insulting those she works for, her bosses, who pays her $100K salary is "super stupid".

The county commissioners should immediately remove Overman from the Hillsborough Emergency Policy Group and ensure she never sees the light of day of that group ever again.