Tampa Mayor Jane Castor was the Tampa Police Chief when the city successfully hosted the last Super Bowl in Tampa and the RNC convention in 2012. She clearly understands how to prepare for events that could get unruly and how to prepare for worst case while hoping for best case.
As Mayor, how could Castor have allowed all the rioting, burning down of businesses and looting that raged in Tampa Saturday night?

Castor has no excuse for not being better prepared on Saturday because she should have zero tolerance for any violent or criminal behavior. We already witnessed in Minneapolis and other cities how these protests were also brining out the agitating rioters. The rioters became violent, they were allowed to create mayhem and the looting free for all began. 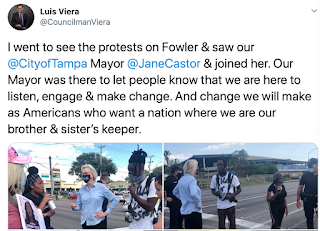 This tweet with a video of Castor shows her in a crowd of protesters who are not social distancing or wearing masks standing close around her. Someone without a mask on is screaming at Castor. She is obviously no longer concerned about large gatherings of people in close contact and even yelling with no masks on.

At about 50 seconds into the video, Castor states that the tone of the peaceful protest changed about 6pm. That is about 15 minutes after Viera tweeted that he and Castor were at the protest on Fowler Avenue. Where exactly was Castor at 6pm when the "tone" changed and so-called protesters began throwing bottles and explosive materials at law enforcement?

If Castor knew about 6pm that mayhem had started, why didn't she call for a curfew that night? That would have provided time to immediately inform the protesters so they could wind up their protest for the day. Instead mayhem lasted late into Saturday night.

We are told the protests are about what appears to be the inexcusable death of George Floyd. We are united in supporting the prosecution of the offending officers to the fullest extent of the law.

But Castor brings up that education, public health, affordable housing, transportation, workforce development solutions takes time and effort. When did the protesters bring up those issues and what exactly is their stance on them? Or is Castor pandering and obfuscating for her lack of preparedness.

Can we expect Castor to appoint another committee or task force to address her list of pandering issues?

On Sunday Castor imposed a curfew on the entire city of Tampa.

Sunday protesters were blocking streets, which is not lawful, and many did not abide by the 7:30pm curfew. They started a trash fire in an intersection and were knocking over headstones in a cemetery.

According to this WTSP report, 21 people were arrested Sunday night.

In this Times article where Castor continued the curfew for Monday night, Castor says she "regrets" the damage caused by those rioters and the looters. The definition of regret is "feel sad or disappointed over something that has happened". That is not much empathy or compassion for the businesses that were destroyed and the destruction that occurred - on her watch.

Castor said she heard"voices loud and clear" over the weekend. The public watched videos of protesters use profanity and yell and curse in the faces of police officers and watched businesses burn and get broken into and looted.

Everyone has a right to peacefully protest but they do not have the right to block traffic or interfere with the rights of others.

At a peaceful protest to end the shutdown and reopen Florida that hundreds attended last month on Kennedy Boulevard in Tampa, the rules were provided to all who attended. Those rules included no blocking the road or traffic which is unlawful. Tampa police were there, were very gracious and courteously reminded the crowd they must stay on the sidewalk.

Anyone who attends a peaceful protest must be told there are rules to abide by. There must not be a double standard applied to who must abide by the rules and laws.

Castor was with the Tampa police department for 31 years. She began in 1984 and was the Tampa Police Chief from 2009 until she retired in 2015. Castor, who now double dips on taxpayers with her full police pension and her Mayor's salary, understands the rule of law and we expect her to prevent mayhem and mischief.

Castor is now pledging to address what she called "systemic issues of police violence against people of color". Is she describing a problem that she was a part of for 31 years and did nothing about?

Castor lifted the Tampa curfew for Tuesday night and protesters showed up again downtown. When Castor went out to try to meet with them about 5pm, she was met with chants of "Go Home Jane".

According to this Fox13 report:


A crowd of protesters gathered in downtown Tampa today outside City Hall, but they were apparently not interested in a dialog with the mayor.

The group was calling for change in the wake of George Floyd’s death in Minneapolis. They said they want a ban on the use of tear gas and rubber bullets on protesters, what they call "de-militarizing police” and an investigation into alleged white supremacy at TPD.

A large group of protesters remained downtown into the early hours of Wednesday morning when few people are out to witness their protest message. Apparently more than 60 were arrested when the large crowd was to told to disperse and refused and a police car was damaged.

We have a First Amendment right to peacefully assemble whether to attend church or attend a protest - even during a virus crisis.

Castor was a force for safety at all cost for the coronavirus and actions, that in retrospect, now seem to have been overreaching for too long resulting in misery, massive job loss and economic devastation. As a member of the Hillsborough County Emergency Policy Group (EPG), Castor kept pursuing curfews on healthy people and wanted to mandate masks - all in the name of safety.

When the EPG voted on April 30,2020 to get rid of the local stay at home order and follow the governor's order, Castor was the lone no vote. Castor did not trust her own constituents to be responsible for their own health or the health of others.

Castor wanted to fight a virus at any cost ruling us with draconian measures. For way too long, Castor demanded people stay out of all parks, public spaces and beaches in the name of safety. But Castor, who's background expertise is law enforcement, failed to protect the city of Tampa from violent mayhem, looting and criminal behavior.

When it came to actually keeping people and property safe, she failed.

According to this Tampa Bay Guardian article, Castor exploited the virus economic shutdown for her political benefit. Castor sent emails that falsely appeared to be an official email from the city of Tampa. It appears Castor used her political PAC to send out emails using the Tampa logo, a city mailing address, a city return e-mail address and signed Mayor Jane Castor to make it appear they officially came from the city of Tampa.

Castor's actions calls into question her leadership and what actually drives her.

When businesses, some who just reopened, are forced to close early or board up in fear, residents are fearful to venture out at night or afraid of roads being blocked, and protesters refuse to talk to the Mayor, Castor has lost control.

Castor, elected last year when only 23% of all eligible voters in Tampa deemed it important enough to go vote in the municipal elections, has become a disaster.
Posted by Sharon Calvert at 9:25 AM