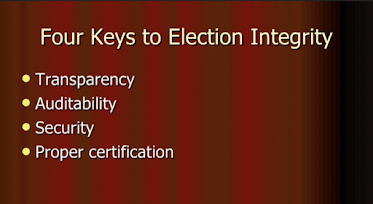 The bill prohibits outside organizations from funding election activities in Florida. No more ZuckBucks can be doled out by partisan, biased Billionaires to meddle in our elections in Florida.

It only took a few clicks on a computer to find that CTCL was a highly partisan organization. It was founded by a Progressive activist who previously trained Democrat party organizers.

CTCL claimed their ZuckBucks money was to provide resources to ensure voters could vote safely during the pandemic and their grant documentation stated: "Your full grant award should be used to cover the costs of administering a safe and secure November 2020 election." The CTCL website stated: "We provide funding to US local election offices to help ensure they have the critical resources they need to safely serve every voter in 2020."

Those claims by CTCL were false. There are numerous reports about the nefarious activities the ZuckBucks were funding, including the infiltration of the November elections by liberal groups and Democratic activists.

J. Christian Adams, president of the Public Interest Legal Foundation (PILF), stated "These grants were used for what was effectively a get-out the-vote drive in heavily Democratic areas."

According to this report, "Emails and documents obtained by the Wisconsin Spotlight allege that individuals affiliated with Mark Zuckerberg’s Center for Tech and Civic Life took control of election procedures, including giving left-wing advisers “access to boxes of absentee ballots before the election.”

A document titled "The Legitimacy and Effect of Private Funding in Federal and State Electoral Processes" from the Thomas Moore Society states how they began monitoring some public-private election activity in swing states in the spring of 2019. This document also states:

..in March 2020, David Plouffe, former campaign manager for President Barak Obama, published his book entitled A Citizen’s Guide to Defeating Donald Trump. At the time, Plouffe was working for the charitable initiative of Mark Zuckerberg and his wife Priscilla Chan.

On page 81 of his book, Plouffe correctly identifies that the 2020 general election will come down to a “block by block street fight” to turn out the vote in the urban core, a key stronghold of Democrat Party votes. Plouffe specifically highlighted high turnouts in Milwaukee, Detroit, and Philadelphia as the key to a Democrat victory. Soon after, we witnessed the rumblings of a previously sleepy 501(c)(3) organization entitled the Center for Tech and Civic Life (CTCL) whose previous annual revenues never exceeded $1.2 million. CTCL began sending agents into states to recruit certain Democrat strongholds to prepare grants requesting monies from CTCL.

CTCL claim that its grants are for the purpose of protecting voters from the COVID-19 pandemic is a blatant lie.

Through public records request, we received information for how ZuckBucks were spent (or not spent) last year by those counties. We did not receive Broward County ZuckBuck grant documents but the information we did receive from the various counties can be found here.

How FL counties spent their ZuckBucks confirms CTCL's claim their funding was for resources to safely vote in 2020 is false. CTCL has allowed counties to request an extension for spending their ZuckBucks through June 30, 2021. Such spending has nothing to do with last years election but allows Big Tech Oligarch Zuckerberg to continue meddling in future elections.

Below is how some large Florida counties spent their ZuckBucks:

Leon county received over $1.43 million of ZuckBucks in October 2020. They spent $845K on Vote by Mail equipment and over $500K for new voting booths. It does not appear the equipment was installed and tested in time to be used for the November election. Leon also spent ZuckBucks on GOTV campaign to reach historically disenfranchised residents and communities.

Palm Beach county received over $6.8 million of ZuckBucks. Palm Beach spent over $1.2 million on mail ballot equipment that was not ordered in time to be installed and used for the November election. They spent almost $600K on a GOTV campaign to promote vote by mail and early voting, specifically targeting Hispanic voters.

Alachua County received over $707K of ZuckBucks. Alachua spent $386K of their ZuckBucks on Vote by Mail equipment that did not arrive in time to be used for the 2020 election. Alachua's expense accounting report reflects they spent $508K of the total $707K ZuckBucks they received. It is unclear what happened to the other $200K.

Brevard County received $850,808 of ZuckBucks. Brevard spent over $725K on Vote by Mail Equipment and new equipment for their ES&S voting system that was not shipped or available to use in last year's election.

Hillsborough County received over $2.9 million of ZuckBucks. Hillsborough egregiously handed about 90% of the ZuckBucks to a local PR firm and spent very little of it on COVID safety resources.

Hillsborough County applied to CTCL for their ZuckBucks on 9/11/202. CTCL awarded Hillsborough $2.9 million in ZuckBucks on 9/21/2020. On 9/22/2021 Hillsborough immediately handed a $2.6 million single sourced no bid contract to Vistra Communications to launch a GOTV campaign during the last month before the election.

Vistra spent a lot of money on a GOTV campaign in the last month before the election. Hillsborough SOE has not been transparent about how and why Vistra Communication was awarded this contract. We were told there are 700 emails between Hillsborough SOE's office and Vistra but we have not been able to obtain them.

Vistra's After Action report provides a high level account of where they spent their ZuckBuck millions. They called their campaign a "call to action" pushing Vote by Mail and early voting and were monitoring and analyzing their success.

We requested more information from the Hillsborough SOE, including copies of the advertising content Vistra used for each targeted demographic and what media platform they ran on. We have not been able to get such information to date.

Voters in Florida have been voting by mail and early voting for many years. The Supervisor of Elections (SOE) is an Administrator who administers and oversees elections in their county. GOTV campaigns are not their responsibility.

It is unethical and perhaps illegal to fund election activities with outside money. Private funding may violate both the equal protection clause of our Constitution and the Help America Votes Act (HAVA) passed after the 2000 hanging chad debacle in Florida. Those who provide private money dictate its use and creates a two-tiered election system that treats voters differently.

The 11 counties who took ZuckBucks spent a vast amount of that money on new equipment that was not used in the November election and on GOTV campaigns. Very little was spent on election COVID safety resources.

Florida received over $72 million of federal HAVA and CARE Act monies since 2018. The State should take inventory of what the counties bought with ZuckBucks for the next time Help America Vote Act funds are handed out by the State to the counties in Florida.

Thankfully Election Protection SB90 stops Zuckerberg shenanigans and prohibits outside private money from funding election activities. Mark Zuckerberg, a partisan, who uses his powerful social media platforms for censorship, propaganda and monetizing his users for profit, cannot meddle in local election activities again in Florida.
In addition to saying goodbye to ZuckBucks, SB90 includes:
These changes help prevent ballot harvesting, provide more transparency to our election process, provides more security for ballot drop boxes and provides the ability to better audit election activities.
We always strive to better protect that which is important and the safety and security of our election activities is very important.
Kudos to the Florida State legislature and Gov DeSantis for doing what is right to protect our votes and secure our elections.
Good Bye ZuckBucks!
Hello Election Protection!

Posted by Sharon Calvert at 9:53 AM