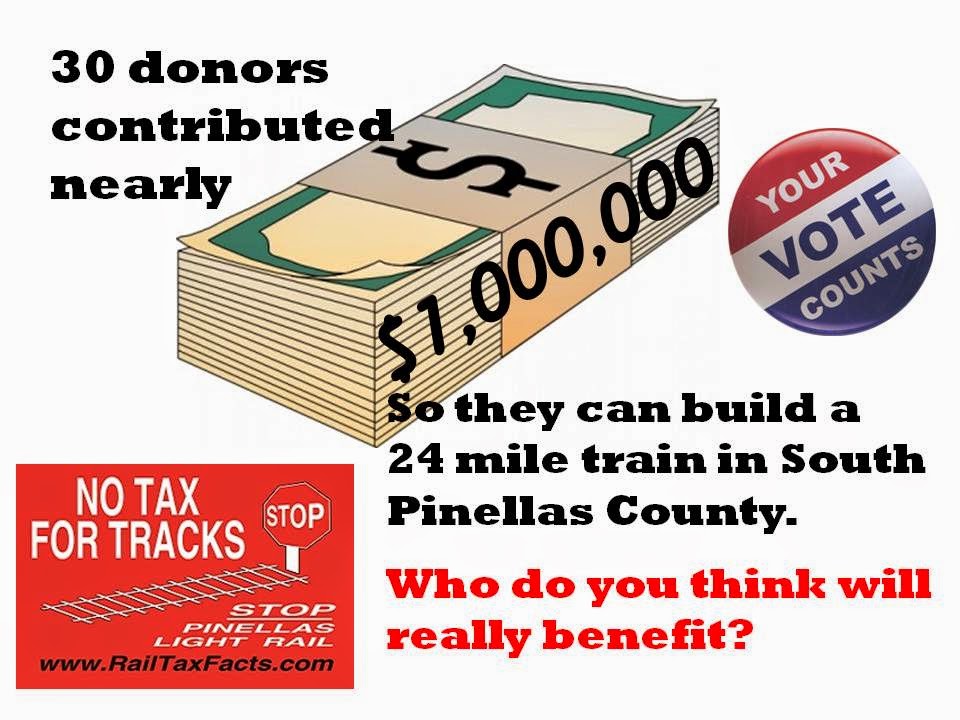 In the recent financial filings regarding campaign contributions, GreenLight Pinellas has received almost $1 million from about 30 donors. You can see the campaign finance reports here Pinellas County Supervisor of Elections.

If there was any question in your mind about who is driving the "train" and what their motives are, it should now be crystal clear.

Yes for Greenlight campaign manager Joe Ferrell said "donations from hospitals, finance firms, IT companies, the Rays and utilities are evidence that the private sector sees developing mass transit as a priority."

Not so much a "priority" as a business opportunity or a political necessity.

If buses were the priority then GreenLight might make some sense, but nowhere in the Ordinance you are being asked to make a law, are the buses first in line for funding.

If the train were a real public transportation priority then it would go where the 2% who might use it live and not where the 1% who wouldn't be caught dead on a train live in their million dollar condos.

The train is passing through business parks, malls and other prime Pinellas County real-estate.

The big dollar players know where this project is going and they just ponyed up almost one million dollars to get their fingers in the pie.

The filling in that pie is your tax dollars.

The developers, train manufacturers, financial institutions, technology companies are throwing big dollars into the Yes for Greenlight till. This kind of money doesn't come with strings attached, it comes with chains attached.

After the smoke clears, should the sales tax referendum pass, just who do you think will really be calling the shots? It sure won't be the taxpayers.

GreenLight and this Tax referendum are bad for all Pinellas County tax payers and our visitors.

There is a solution to all of this. It's called YOUR VOTE.

They can buy all the ads, fill the airways, and stuff your mailbox until it falls over, but don't let them buy your vote.