TMA's are federally designated for urban areas greater than 200K and associated with how federal money is allocated. Information about the Tampa Bay TMA and its map can be found here. All of Pinellas is in the TMA and urbanized parts of Hillsborough and Pasco.

The TMA Leadership Group consists of electeds (county commissioners and city council reps) who are members of the MPO's of Hillsborough, Pinellas and Pasco. The TMA has no authoritative policy making powers, like each MPO has, and the electeds are the only voting members of this "advisory" group. However, others who attend and sit at the table with those electeds include the Executive Directors of Hillsborough, Pinellas and Pasco MPO's, Ronnie Duncan, Chair of TBARTA, Ray Chiarmonte, Executive Director of TBARTA, representatives from FDOT, Katherine Eagan, CEO of HART, Brad Miller, CEO of PSTA and numerous staffers.

The TMA meetings are normally held in the PSTA Board meeting room in Pinellas County and they are publicly noticed meetings. The public can attend and watch but there is no public comment.

At the TMA Leadership Group meeting held April 8, the agenda included an item titled "Transit Referendums around the country" presented by a Jason Jordan, Government Affairs Director, American Planning Association. We were told it was the Pinellas MPO who specifically requested Jordan come and present to the TMA.

A copy of Jordan's presentation can be found here.

Jordan's presentation was under the logo Center For Transportation Excellence (CFTE) which we will address later. It was more than just about transit referendums around the country. It was to provoke discussion amongst the electeds and taxpayer funded entities for how to successfully push through a local sales tax hike transit referendum.

The charts below are from Jordan's presentation. Obviously, Floridians have not been supportive of transit sales tax referendums. It was Miami-Dade who passed the last local transit sales tax hike referendum in 2002. That sales tax hike failed to build out what was promised and today almost 40% of that tax hike goes to Miami-Dade Transit's operating expenses.
Since Jordan's presentation was to electeds and taxpayer funded entities, we assume the "we" in the chart above is those who participated in this meeting who are all paid for by taxpayers. Apparently winning is how to get more taxpayer money - both locally and from the federal government. It's all about money and how to get more of it.

Messaging, polling, voter targeting, coalition building, campaign coordination, ground game - that is all campaign related activities. In the last couple decades electeds, taxpayer funded entities and special interests figured out how to collude and coordinate their resources to stack the deck and pursue sales tax hike referendums - used to then leverage for more money - federal funds. This pursuit of federal monies has created the perverse behavior to pursue the most expensive transit projects to get the most federal dollars. We see that very behavior in Tampa Bay. 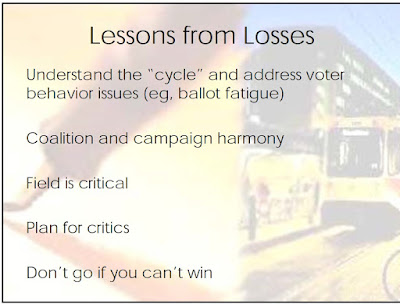 Apparently, Hillsborough County did not learn from any of the recent losses in the Tampa Bay area since 2010. What is striking is the elements Go Hillsborough failed at, especially  that Go Hillsborough has such broad opposition not support.

The last point - "don't go if you can't win" should be taken very seriously. Perhaps it was as Go Hillsborough was rightfully voted down 4-3 by our county commissioners.

Jordan's presentation provoked discussion amongst the TMA group, some of which we understand included:

Interesting that a Tribune article published before the Go Hillsborough public hearing reported:  "Hagan said that by design, the ballot question does not mention light rail — a mode of transportation that opponents focused on and that was highly unpopular among suburban voters."

Who is Jason Jordan? A quick Google search finds that Jordan is a transit advocate/lobbyist with Advocacy Associates. He spent 6 years as the government affairs director with the advocacy organization American Planning Association.

The Advocacy Associates website shows CFTE is one of their clients. The CFTE website shows Jason Jordan as their Executive Director. Google search also confirms Jordan and CFTE's close association with the largest public transit lobbying organization in DC, American Public Transportation Association (APTA). Appears to be a very cozy group of organizations all connected. We assume they are all well connected financially.

Opponents using erroneous arguments and fomenting fear are eroding the great strides made over the past decade.

CFTE's website includes a campaign toolkit that includes a guide for successful transit initiatives. Who is on CFTE's Advisory Board? Parsons Brinckerhoff and the Federal lobbyist for HART.


Members of the CFTE Advisory Board who support the work of CFTE include:

Their website states CFTE is a non-partisan policy research center. However, Page 30 of CFTE's guide for successful transit initiatives includes a section on Opposition Research. They basically consider those who oppose the referendum as the "enemy".

There are numerous valid reasons and concerns for opposing referendums: concerns with fiscal due diligence, prudent and wise spending of current tax dollars, good governance, good policymaking, concerns with cronyism and funding of boondoggles. Should an organization with such an attitude be presenting to the TMA, a group of electeds, policy makers and taxpayer funded entities at a taxpayer funded facility? We're left wondering if those attending this meeting view anyone opposing such referendums as the enemy?

CFTE's guide provides the template for the advocacy campaign and all the activities we saw in 2010 and 2014 are in there. On page 61 CFTE encourages messaging like below that Phoenix used called "Finish the Freeways" to divert away from the rail portion.

In an effort to divert attention away from the light rail component of their proposal, the Yes on 400 campaign in Phoenix, Arizona, used a campaign slogan geared towards the freeway component of the plan,…….

Sound familiar? It's a marketing and PR strategy.

Page 81 of the CFTE guide devotes an entire section to responding to critics (the enemy?) CFTE does not like Libertarian or Conservative leaning think tanks, taxpayer associations acting as taxpayer watchdogs and even certain individuals. They don't like CATO or Heritage. Ever wonder why no conservative organizations are ever brought in to present alternative ideas and solutions to our electives and policy makers? Perhaps because they cannot get passed the entrenched bureaucratic gatekeepers who prefer pursuing higher taxes and a bigger bureaucracy.

Some questions need to be answered. Why was Jordan invited to present? Did taxpayers (MPO) pay to bring him to present at this meeting?  Is it a proper use of taxpayer resources? Was this using taxpayer resources to collude amongst electeds and taxpayer funded entities for how to pursue tax hike referendums?

Was this presentation a proper role of federally funded MPO's?

Contact your Congressional Representative, send them a copy of the presentation, inform them what was presented and discussed at the April TMA meeting and ask them.
Posted by Sharon Calvert at 10:01 AM