Voters and taxpayers are not funding the All for Transit (AFT) 30 year 14% rail tax hike.

The Tampa Bay Partnership, leader of the local rail cartel, is at it again.

According to AFT's latest campaign filing on the SOE website, $175K was recently donated to the AFT transit tax hike PAC - from two donors.

While almost a million dollars have been donated by special interests cronies, only $1025 has been donated by individuals - in a county of 1.3 million people. The dismal support by those who actually can vote may indicate how totally underwhelmed voters and taxpayers are about raising their sales taxes to the highest in the state. Especially for a $16 Billion transit tax hike that includes Billions for costly rail but Zero funding for new roads and new lane capacity - for 30 years.

BayCare gave at least $25K to Greenlight Pinellas in 2014.
When we looked at BayCare Health Systems 990 for 2014, which is available thru Guidestar, we could not find the $25K donation to the Greenlight Pinellas political advocacy campaign accounted for in their Schedule C - Political Campaign and Lobbying Activities. Wonder why.

House of Coffee Tampa is a Starbucks franchise that operates in Tampa General Hospital and TGH Brandon Healthplex. House of Coffee's legal entity is TGHHOC, Inc. which is a for profit wholly owned subsidiary of Florida Health Sciences Inc.

Florida Health Sciences, Inc. is the nonprofit legal entity Tampa General Hospital operates under.
It seems a bit odd for a 2 site coffeehouse to be handing $125K to a PAC. But for profit corporations do not have the limits or restrictions on engaging in political activity that nonprofits have.

Therefore, it appears TGH funneled their $125K PAC contribution to AFT through their for profit coffee house subsidiary. A bit misleading huh?

The President and CEO of Tampa General Hospital John Couris, who receives a total salary package over a million dollars a year, was hired last June from Jupiter, FL. Coincidentally, Couris had previously worked at BayCare.

The plot thickens. Shanahan is currently a city of Tampa (Mayor Buckhorn) appointee to the HART Board and she is HART's representative on TBARTA.

HART would get so much transit tax dollars from AFT's rail tax hike, they would literally be swimming in it. We bet TBARTA, created by the state at the request of Tampa Bay Partnership, will want a piece of the massive transit funding action too.

And schizophrenia abounds. For the last few years, Tampa Bay Partnership has been running around Tampa Bay, Tallahassee and DC pushing regionalism and lecturing us all that we must regionally speak as one kum ba ya voice - to get more state and federal tax dollars - of course.

Tyler Hudson, Chair of AFT PAC, is a Board member of the Tampa Heights Civic Association whose members want to tear interstates down.

Earth to Tampa Bay Partnership - that includes I-275 from downtown to Bearss Ave. Cannot make this stuff up.

Tampa Bay Partnership cronies must have lots of money to burn. They threw gobs of money behind both overwhelmingly defeated transit tax hike boondoggles in Tampa Bay in 2010 and 2014 and are doing it again. And 2018 is not 2010 or 2014 as innovation and technology is disrupting traditional transit as transit ridership has been tanking everywhere, including in Hillsborough County.

Tampa Bay Partnership was not elected or appointed by anyone and they do not represent the overall business community in Tampa Bay. They are a pay to play lobbying group of one-percenters who keep funding expensive campaigns for rail tax hike boondoggles and refuse to even consider any other transportation funding solutions. 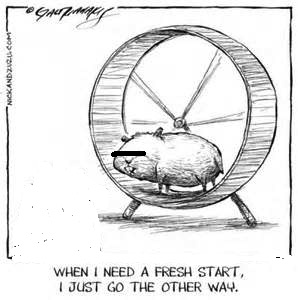 Insanity is continuing to do the same thing over and over again expecting a different outcome.

The All for Transit tax hike is worse than the 2010 rail tax. The AFT $16 Billion tax hike with its 5 pages of big government regulations ignores funding new road capacity and absurdly prevents  and prohibits changes for 30 years - in a county that is expected to grow by 700-800K over the next 30 years.

This is not just an All for Transit tax hike, this is a 30 year congestion creation tax hike that will cause gridlock on Hillsborough County's arterial roads.

Does BayCare and TGH simply have money to burn?

Why did they decide to financially support an unnecessary massive transit tax hike that hurts the low and fixed income the most? BayCare and TGH benefit from the one-half percent indigent care and trauma center sales surtax that generates over $140 million a year from county taxpayers. They know those who cannot afford to pay for an emergency room visit. Does BayCare and TGH want the low income and the most financially vulnerable to pay for the costly rail they will rarely if ever use.

And we are left wondering why two healthcare systems support a massive transit tax that will negatively impact first responders as congestion increases in a rapidly growing county.

The common denominator is the Tampa Bay Partnership.

Vote No on the Rail Tax Hike in November!
Posted by Sharon Calvert at 8:28 PM