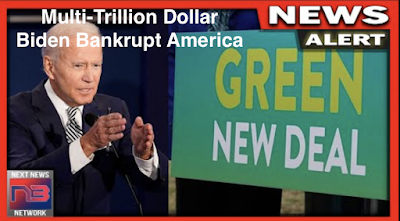 Biden and the Democrats are masquerading their Multi-Trillion Dollar Green New Deal as an “Infrastructure and Jobs" bill. It is actually another Democrat massive porkbarrel Omnibus Spending bill to advance Biden's radical climate change agenda.
But Biden's Big Government Socialist spending agenda is hitting the headwind of good news. All across the country our economy is opening back up providing the opportunities for Americans to get back to work.
This now raises questions why we need to spend $2.5 Trillion on what Biden touts as a "jobs" bill right after ramming through his faux COVID relief $1.9 Trillion Porkulus bill. Ironically, the poorly timed Porkulus included incentives for people not to go back to work so should those provisions now be repealed?
Even as Biden proposes the biggest tax hike in history, he knows that will not pay for his Socialist programs and will do nothing to reduce deficit spending.
Biden's Green New Deal will put more Debt on our children, grandchildren and future generations. Our unsustainable debt will continue increasing at an alarming rate.
Biden's Green New Deal is the Biden Bankrupt America (BBA) bill.
The Biden Bankrupt America (BBA) bill spends very little on Roads, Bridges, Ports, and Airport infrastructure. Where are the Trillions of Biden Debt Dollars going?
According to Legal Insurrection and other reporting, the BBA Green New Deal will fund (editorializing mine):
The Grandaddy of Big Black Hole nebulous spending in the Biden Bankrupt America Bill is $580B. These funds will be funneled to the Democrats "greenie weenie" cronies and donor base. Remember Solyndra who was financially backed by Obama fundraising bundler George Kaiser? (more below)
There are many provisions in the Biden Bankrupt America, crafted by Socialist Bernie Sanders, to promote Biden's Leftist equity and social justice warrior agenda.
The Biden Bankrupt America Bill includes provisions to stomp out State "Right to Work" laws and protect Unions. It includes job destroying provisions to wipe out the livelihoods of millions and millions of independent contractors like ride share drivers, content providers, etc.
BBA makes unconstitutional policy dictates on local land use. It forces bans on minimum lot sizes, bans on mandatory parking requirements and bans prohibitions on multifamily housing. Oh the irony...the hypocrisy of Democrats ranting about "local control" when they prefer DC, a thousand arm lengths away, to rule over state and local issues.
Biden admits his Biden Bankrupt America is for government to dictate a total electric economy by 2035 which is just 14 short years away. Biden's dictates ignore expansion of nuclear power.
What will happen when Biden destroys our fossil fuel industry in 14 years? What will happen as Biden dictates an all electric economy that relies on solar and wind but no expanded nuclear energy?
Look at California. California has already implemented the "electrify everything" agenda. California's costly "greenie weenie" dictates have resulted in rising energy costs hurting low and middle income the most.
Now California cannot keep their lights on and use rolling blackouts like a third world country. The Biden Bankrupt America plan will do that to our entire country.
We remember the "greenie weenie" scandals from the Obama/Biden 2009 crony stimulus. Biden, who has never created a job in his life, was appointed by Obama to oversee the Spending. Taxpayers lost Billions that was handed to "greenie weenie" companies who quickly went bankrupt.
When "greenie weenie" Solyndra took $535 Million of Obama/Biden stimulus, Biden stated:

By investing in the infrastructure and technology of the future, we are not only creating jobs today, but laying the foundation for long-term growth in the 21st-century economy.

Two years later Solyndra was bankrupt laying off all 1100 employees wasting $535 million of taxpayer dollars.
The Biden Bankrupt America "greenie weenie" spending agenda on steroids will come with strings attached. It will force burdensome regulations and more bureaucracy to further Biden and the Democrat base Socialist agenda.
Imagine the waste, fraud and abuse. It will abound as Democrats throw Trillions of taxpayer dollars to their crony donor base and Leftist special interests.
Worst of all, Biden and the Democrats intend to bake in their massive spending into future spending. Biden and the Democrat intend to make it as difficult as possible to reduce or get rid of the new Socialists spending programs they created through $1.9T Porkulus and the Multi-Trillion Biden Bankrupt America bills.
In a span of only a few months Biden has brought up two bills costing almost $5 Trillion.