PSTA, Forward Pinellas MPO (Metropolitan Planning Organization) and FDOT (Florida Department of Transportation) are imposing Road Diets on 34th Street S from 22nd Avenue S to 54th Avenue S. They are removing general vehicle lanes of traffic that over 98% of us use everyday for bus only lanes when less than 2% use transit. The corridor where the lanes are being removed have connections to I-275 North and South at both ends and within the corridor.

Forward Pinellas hosted ONE "Open House" meeting in April 2019 to inform the public of the "proposed" lane removals on 34th Street S. I attended that meeting. When citizens started publicly speaking in front of all the citizens gathered, often with negative comments about the lane removal, they were shut down by Whit Blanton of Forward Pinellas. Blanton, visibly irritated that citizens started speaking in front of each other, shut down all public commenting and told the citizens gathered they had to go speak with the bureaucrats he had placed at stations in the room. That meeting was a dog and pony show farce. No other public meeting was ever held about the lane removals.

A push survey was handed out to the 64 attendees at the April 2019 meeting that, of course, limited how one could answer. 61 people completed the survey and it is in the written comments where people could actually voice their opinions. Below are a few of the written comments:

This corridor is currently considered more suburban today. However, the lane elimination Road Diet request from Forward Pinellas MPO reflects the MPO/St. Petersburg want to transition this corridor to be urban or even an urban center. We seriously doubt the vast majority who use State owned 34th Street S regularly knew this. While St. Petersburg keeps pushing dense growth and haven't fixed their sewage and other infrastructure problems, they will gladly - at your expense - remove State owned infrastructure - you already paid for.

The use of Road Diets entered into the transportation policies of FDOT in 2014 under the guise of "Complete Streets". FDOT's Road Diet approval process was called "Lane Elimination". This process has gotten pushback from citizens, businesses and even elected officials who oppose it. In 2019 FDOT's "Lane Elimination" process was presented with massive opposition to Road Diets. It appears FDOT changed the name of their Road Diet process to "Lane Repurposing" but it means the same thing - Road Diets.

Ironically, FDOT admitted last year that transit ridership began declining in 2014, the same year FDOT began imposing Road Diets for transit. FDOT now admits there are numerous factors for transit ridership decline, including telecommuting, online commerce, online education, use of online communications (like Zoom), and other innovation and technologies providing alternatives to traditional transit.
FDOT admits what a recent study from our local transit expert Steve Polzin at CUTR concluded - that transit is "unlikely to return to pre-COVID-19 conditions." Transit ridership was dismal in Tampa Bay and Florida before the pandemic so why is FDOT removing vehicle lanes for transit that fewer and fewer people are using?

Road Diets, often not popular with the vast majority who use vehicles on our roads, get imposed with little transparency and by misleading the public about these projects. In Forward Pinellas MPO's transportation plan, the project that imposes Road Diets on 34th Street S is described as an upgrade to a repaving project to "construct a wide sidewalk on the west side of the roadway".

According to this report, St. Petersburg rammed the 9th Street N Road Diet also through a "repaving" project.

PSTA/City of St. Petersburg has started removing vehicle traffic lanes on 1st Avenue N and S for PSTA's Central Avenue Bus Rapid Transit (BRT) aka "SunRunner". General vehicle lanes and parking are being removed for a bus only lane for the BRT. PSTA or St. Petersburg never held one public hearing about removing transportation infrastructure already paid for. Like 9th Street, most people are only finding out now what PSTA and St. Petersburg are doing to their roads and parking.

PSTA/FDOT is also removing valuable lanes of traffic on congested Pasadena Avenue in S Pasadena - right before the Corey Causeway drawbridge for PSTA's costly BRT. When PSTA proposed the project years ago, PSTA never meet with S Pasadena or  held any public meetings in S Pasadena for citizens to provide their input and remember Pasadena Avenue is a State owned road.

In 2019, numerous S Pasadena condo associations and the S Pasadena city council passed formal Resolutions opposing the transit project and opposing removing vehicle lanes. When S Pasadena requested a public hearing be held in S Pasadena to allow their citizens to publicly comment about removing traffic lanes in their city, PSTA and FDOT refused to do so. Instead on September 11, 2019, the 11th hour in PSTA's Road Diet approval process, PSTA held a dog and pony show in S Pasadena where there was overwhelming opposition to the lane removals and PSTA's BRT project. That meeting was a farce too because by October 4, 2019, the Road Diet was a done deal.

Pasadena Avenue is also a State owned road (SR693). FDOT knew the city of S Pasadena and their residents opposed the transit project and Road Diets. FDOT was handed all the Resolutions passed by the surrounding condo associations and the S Pasadena city council opposing the lane removals and PSTA's costly BRT project. FDOT was handed all the written comments from citizens who overwhelmingly opposed the project. It was all ignored.

Traffic acts like water - it seeps where it can. Road Diets moves traffic to other neighborhood arterial roads not meant to hold such capacity making them more dangerous.

As 1000 people a day are moving to Florida with most bringing their vehicles, why is FDOT allowing the removal of vehicle lanes on State owned roads? Why are these Road Diets being imposed without any public hearings for citizens to publicly comment and weigh in on the Road Diets? 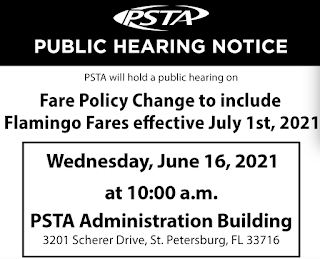 There is a governance problem in Florida regarding Road Diets that needs to be fixed. If FDOT will not reform their Road Diet approval process, then State legislators and/or the Governor needs to step in to require timely public hearings are held before Road Diets are approved.
Road Diets should not be imposed in Florida without at least one public hearing.
Posted by Sharon Calvert at 10:05 AM