The public and voters of Hillsborough County must never forget that All for Transportation Transit (AFT) caused a dumpster fire legal mess. AFT's dumpster fire resulted in over a HALF A BILLION dollars being unlawfully collected from taxpayers.
Deconstructing AFT finds the legal mess dumpster fire they created nefarious and foul smelling.
AFT was funded by wealthy special interests who have their own legal counsel. Former Tampa City Attorney Jim Shimberg works for AFT's largest donor Jeff Vinik. It is reasonable to expect Shimberg, with his public sector and government relations law experience, fully understands Florida State laws and Statutes. It is reasonable to expect AFT spokesperson Christina Barker, hired by Vinik 2 weeks before AFT's transit tax petition drive began in 2018 to cheerlead for the transit tax, communicates with Vinik's lawyers.
AFT Chair Tyler Hudson, AFT spokesperson Rena Frazier and AFT spokesperson and one of the authors of AFT's illegal transit tax Brian Willis, are all lawyers.
AFT was surrounded by lawyers and had access to lots of lawyers. AFT, a political action committee (PAC), even met directly with a Hillsborough County Attorney at County Center to review their referendum ballot language before their petition drive began. Such meeting appears to have violated the County policy prohibiting any political activity inside County Center.
How could AFT be so woefully incompetent and/or ignorant of Florida Statute 212.055 which governs the local transportation sales surtax?
Or did AFT ram their illegal transit tax onto the ballot at the 11 hour in 2018 knowing there were legal issues? Did AFT think no one would file a legal challenge? Did AFT think if a lawsuit was filed, the outcome would result in the county being able to keep the transit tax monies, which was exactly Judge Barbas's lower court ruling in June 2019?
Something smells - especially since it appears the AFT's high priced lawyers are driving the AFT lawsuit losers legal actions - not the lawyers for the County or any other AFT Defendant.
AFT was never a Defendant in the AFT lawsuit. They filed a court motion that was granted allowing AFT to be an "Intervenor" in the case to participate in the legal proceedings. AFT insisted on intervening so their high priced big gun lawyers could take over leading the case for the Defendants who could not afford such pricey legal counsel.
AFT's legal fees are being paid through their nonprofit Keep Hillsborough Moving, Inc. (KHM) where donors are not required to be disclosed not through their AFT political committee that requires donor transparency. The Board members of KHM include AFT Chair Tyler Hudson, Vinik employee and AFT spokesperson Christina Barker, Hillsborough County Aviation Authority Board member and AFT's accountant Robert Watkins and Janet Scherberger, who worked for TIA's CEO Joe Lopano during AFT's 2018 campaign. In 2019, the KHM nonprofit received $814K in contributions and spent almost $800K on legal fees.
We do not know yet how much was received or spent by KHM in 2020. We can venture that AFT has spent well over a million dollars defending their illegal transit tax.
While KHM does not disclose its donors, it is reasonable to assume the same wealthy special interests who funded AFT's dishonesty and malfeasance in 2018 are funding AFT's high cost lawyers. Of course AFT wants the county to keep as much of the illegal transit tax as possible so AFT keeps funding AFT's dumpster fire legal mess to that end.
Hillsborough County hired outside counsel Alan Zimmet to represent the County in the AFT lawsuit. According to public records, the county received invoices of less than $53K thru May 2021 for Zimmet's legal fees. This confirms AFT's lawyers are leading the Defendant's legal actions, not Zimmet or any other Defendant's lawyers.
With AFT's high priced lawyers in charge, the County and other AFT Defendant's lawyers apparently must pursue the legal actions AFT's big gun lawyers dictate. Thus, the County filed their phony baloney refund proposal which is not in the best interests of all taxpayers who were swindled by AFT's illegal transit tax.
Subsequently, Hillsborough County Commissioner Stacy White filed a motion objecting to the AFT lawsuit losers "funny business" refund proposal. According to this report, White stated the "funny business" proposal "is so unworkable it would require judges to hold less than 10-second-long hearings for 10 hours a day, seven days a week for four months". White's motion states the local governments, who are the AFT lawsuit losers, have no standing in the case.
Other proposals include a County sales tax holiday until the over a HALF A BLLION of unlawfully collected transit tax dollars are depleted or a direct check to individual taxpayers based on their IRS income records. But with AFT's big gun lawyers in charge, such refund proposals are being fought through motions filed by the attorneys for the AFT lawsuit loser Defendants.
AFT who created the dumpster fire legal mess and the Defendants who lost the AFT lawsuit should have no say in any refund process. The lawsuit winning side must get to decide the refund remedy.
Judge Rex Barbas made a poor, grammatically incorrect, incoherent and illogical lower court ruling in June 2019. To his discredit, Barbas allowed the transit tax itself to stand resulting in the unlawful collection of over Half a Billion dollars over 2 years. Barbas's ruling was overturned in its entirety by the Florida Supreme Court in February 2021. If Barbas had properly ruled in June 2019, he would have stopped the collection of the transit tax and avoided this refund crisis.

To avoid any perception of a tainted decision or perceived controversy, Barbas should not be deciding the refund remedy nor any judge in the 13th Judicial Circuit. As we posted here, the class action lawsuit requesting a refund remedy filed for a change of venue to Leon County.
All of today's Tampa-Centric Five county commissioners - Pat Kemp, Kimberly Overman, Harry Cohen, Gwen Myers, Mariella Smith - supported AFT's illegal transit tax in 2018. Two of them, Kemp and Cohen, are lawyers and Myers worked for the County for 25 years. Did they support AFT's transit tax knowing it had legal issues or are they incompetent? Or are they blinded by their transit ideology that the end justifies the means?
A claim by any Tampa-Centric Five commissioners that the class action lawsuit filed will enrich private sector attorneys is a ruse.

After White filed an appeal of Barbas ruling in June 2019, the County's outside legal counsel Alan Zimmet failed to advise the county commissioners of action to stop the tax collection until a final legal ruling was rendered. Perhaps the massive refund crisis could have been avoided. Shouldn't Zimmet be asked about that?
The Tampa-Centric Five, who foolishly supported AFT's unlawful transit tax, support the AFT-crafted proposed phony baloney non-refund refund process. They know the vast majority who paid the illegal transit tax did not keep receipts for the over 2 years the tax was unlawfully collected. They know a large number of people, who paid the unlawful tax will never even know about a refund. The end - the County allowed to keep as much of the illegal transit tax as possible - justifies the means - a phony baloney refund process.
The Tampa-Centric Five foolishness continues. They are now ridiculously pushing to put another 30 years $16 Billion AFT 2.0 rail tax on the 2022 ballot...before one cent of the illegal AFT transit tax has been refunded.
Who is driving the AFT 2.0 rail tax boondoggle at County Center? It is not the citizens and taxpayers of Hillsborough County who do not want to spend billions on costly trains and transit.
As reported here, a recent study shows a super super majority rejects transit. HART's ridership, dismal before the pandemic, has tanked more for numerous reasons and may never recover as reported here. It is fiscally irresponsible to force taxpayers to spend $7 Billion on costly trains and transit for a super super minority of users. Taxpayers in unincorporated Hillsborough forced to pay for costly rail in the city of Tampa to benefit AFT's wealthy downtown special interests donors is unfair, unjust and simply wrong.
Kudos to Commissioner White for pushing back on the Tampa-Centric Five foolishness and calling them out for their fiscal irresponsibility. White has publicly stated he will launch a campaign to defeat any new transportation sales tax referendum that is similar to the 2018 All For Transportation rail tax boondoggle. He knows residents in unincorporated Hillsborough especially want transportation dollars to improve and expand their roads, not fund costly transit in Tampa.

Commissioner White has laid down a marker he will will stand behind and that many many others will support. The voting public will not be lied to again.

The city of Tampa has their own revenue sources available to fund their own trains if that is their priority.

Jeff Vinik's Water Street District was given revenue raising powers by the state legislature in March 2018. Ironically that was right before Vinik began funding AFT's rail tax boondoggle initiative benefitting him that began in June 2018. Vinik has also received at least a $100 million in taxpayer subsidies for his downtown development which is way behind schedule. With his revenue raising powers, Vinik can fund his own rail infrastructure in his wealthy Water Street District enclave.

Commissioner White, NoTaxForTracks and others warned of AFT's legal issues in 2018. AFT's local media allies refused to report about them. The Tampa-Centric Five, including lawyers Pat Kemp and Harry Cohen who should know better, ignored the warnings.

After White filed his legal challenge, according to this report "County Commissioner Kimberly Overman said the referendum language was vetted closely and voters clearly spoke. "This is a waste of taxpayers' money and that's a shame," Overman said."

The shame is on Overman who is not a lawyer but is known for calling her own constituents "super stupid". Overman has a history of being a condescending know it all.

No commissioner should ever support policies that cons the voting public, abuses taxpayers or puts the County at risk of lawsuits. Those commissioners should be voted out of office.

AFT, surrounded by lawyers, put an illegal transit tax on the ballot. AFT is responsible for creating the $512 million refund crisis. AFT should be held accountable. No one should listen to AFT or their allies ever again.

The Tampa-Centric Five remain tone-deaf. They dream of transit ridership somewhere "Over the Rainbow" and push for another AFT 2.0 rail tax boondoggle. 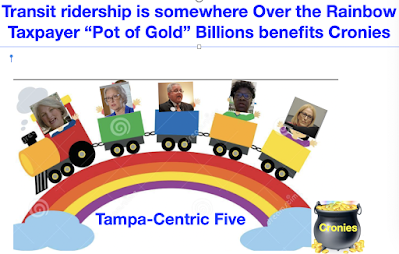 Posted by Sharon Calvert at 8:32 AM