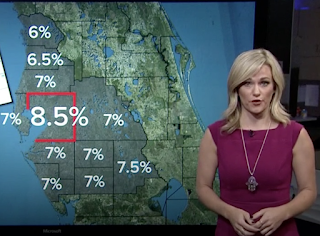 Skyrocketing gas and food prices, raging inflation, many businesses and families financially struggling and so much economic uncertainty. No problem - Hillsborough's on the road to unnecessarily burden taxpayers even more with higher sales taxes, the most regressive tax that hurts the poor, lower and fixed income the most.
Hillsborough County hosted Transportation "Open Houses" in February/March. Open Houses are informal exhibition events to sell whatever the host is exhibiting to those who attend.
The Transportation Open Houses were messaging events for the County to sell a 30 year 1 PERCENT (NOT 1 CENT) $18 BILLION tax hike. Attendees could view and ask questions about the County prepared exhibits that we previously reported were deceptive and misleading and submit written comments.

The County did not host Town Hall meetings that empowers those who attend to directly engage, communicate and ask questions in front of everyone attending the event. Open Houses empowers those who host the event because the hosts are specifically messaging what they want the attendees to hear or see.

257 residents (out of a county population of almost 1.5 million) attended the 5 Open Houses and the County received 149 comment cards from those who attended. Commissioner Gwen Myers has been a chief champion for putting the All for Transportation (AFT) do-over 30 year 1 PERCENT (NOT 1 CENT) $18 BILLION rail tax on the November ballot but only 21 residents attended the Open House in her District 3.

Then the County held a Transportation Workshop on March 10th after the Open Houses. A key take away from reading the County's Transportation Open House Summary Report and the comments submitted is the top priorities of the majority of those who responded are to fix the roads in Hillsborough County. Just like last year's survey we posted about here, expanding transit is a priority of a super super minority 2% of those who attended the Open Houses.

Some highlights from the Workshop: 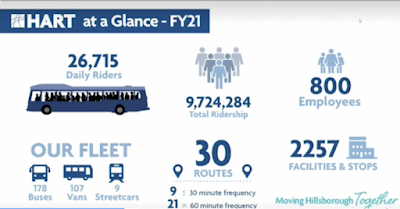 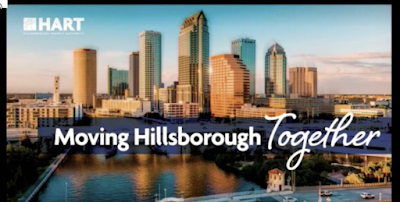 HART's logo is appropriately against the backdrop of downtown Tampa where a 30 year 1 PERCENT (NOT 1 CENT) $18 BILLION rail tax will benefit the most. HART currently imposes a .50 millage rate property tax on all of Hillsborough County except Plant City and any new tax would be in addition to their property tax.

Beth Alden, Executive Director of the Hillsborough Transportation Planning Organization (TPO), made some interesting comments about the TPO's 20 year Long Range Transportation Plan (LRTP). Note: All the Tampa Centric 5 Democrat commissioners (Overman, Smith, Cohen, Myers and Kemp) sit on the TPO Board who approved the LRTP.

Commissioners Cohen and Hagan did not weigh in.

The county commissioners should simply be honest. The only reason for a massive 30 year 1 PERCENT (NOT 1 CENT) $18 BILLION transit tax that hands HART $7-8 BILLION is to fund costly rail projects.

The Tampa Centric 5 have been clear they want to put an AFT do-over rail tax back on the ballot. They have the votes and are on the road to do it.

Hillsborough County can fund its transportation NEEDS without any new tax hike.

Stay tuned to find out and please subscribe to keep Your Eye on EyeOnTampaBay.

Posted by Sharon Calvert at 7:45 PM