Post by Dr. Jim Davison and Sharon Calvert
All taxpayers are being hit hard by raging inflation and skyrocketing gas prices. Hillsborough County has yet to refund one penny of the unlawfully collected $512 MILLION illegal All for Transportation tax back to the taxpayers.
Some Hillsborough County commissioners and County staff don't care. Those who want to raise taxes at this time are not compassionate people. 70% of Americans live paycheck to paycheck and these commissioners want to unnecessarily burden Hillsborough county taxpayers with higher taxes. They want to unnecessarily burden struggling businesses with higher taxes.
So Get ready!  Get ready!
Hillsborough County is hosting 3 more transportation meetings this week at 6pm - tonight at the Northdale Recreation Center, tomorrow night at the All People's Community Center and Thursday at the Riverview Public Library.

On February 9th Hillsborough County did a test run at the Jan Platt Library where they unleashed their propaganda campaign to sell its latest massive sales tax hike. This rail tax go round will take an estimated $18 billion dollars from the taxpayers, businesses and economy in Hillsborough.
These meetings are intentionally NOT called Town Hall meetings where those who attend can make public comments. The County does NOT want the public to hear comments made by others because they fear those telling the truth will destroy their false messaging.
Pushing another $18 Billion rail tax, Hillsborough County is telling the public information that is not true, filtering out information that is true and using their position to deceive.
The public is handed a handout upon entering the county's transportation meeting that is Hillsborough County's “Executive Summary of the 2045 Long Range Transportation Plan” (LRTP). The LRTP is a federally and state mandated document required to be created by the Transportation Planning Organization (TPO). The TPO was formerly known as the Metropolitan Planning Organization (MPO).
The LRTP is NOT a County produced document. The TPO has failed the residents and taxpayers of Hillsborough County for decades by pushing costly rail and transit over fixing local roads.
As we posted here, the TPO's 2045 LRTP is very flawed and is a congestion creation plan. The 2045 LRTP was passed in 2020 and contains $32 BILLION of Federal, State and Local revenues over the next 23 years. It contains the same Sales Tax revenues as the unlawful 2018 All for Transportation (AFT rail tax.
The TPO never removed the AFT sales tax revenues from the LRTP even after AFT was ruled illegal and unconstitutional by the Florida Supreme Court. Why?
Because the County wants plans to put a 30 year $18 BILLION AFT 2.0 rail tax on the November ballot.
Because the rail cartel members are a majority of those who sit on the TPO Board. Because the Tampa Centric 5 Democrat county commissioners sit on the Board and approved the TPO's costly flawed plan. Because the TPO has been pushing costly rail over fixing our roads for decades. Because the TPO is part of the rail cartel.
Once inside the County's transportation meeting, the public is "greeted" with a series of storyboard charts. These charts were filled with disinformation, misinformation and misleading information.
The County even used an extremely misleading TPO logo'd chart titled "State of the System 2021" with information that was created made up by the TPO in January 2022. None of the numbers used on that chart were contained in the actual "State of the System 2021" report. The TPO created this chart that is deceptively named by inserting made up claims their flawed LRTP was to accomplish. This is outright fraud!
There is a reason the Hillsborough County budget is an abomination of confusion. The County relies on the public not understanding the budget so they can tell the public what the County wants them to know to do what the County wants them to do....pass huge unnecessary tax hikes.
The County created their "storyboard" charts to present to the public from charts County staff presented to the commissioners at the September 23, 2021 Transportation Workshop. The charts for the public leave out these charts. 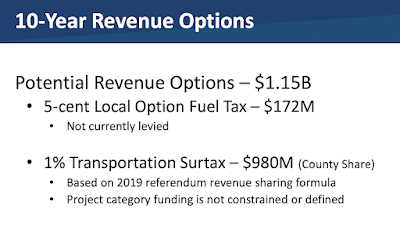 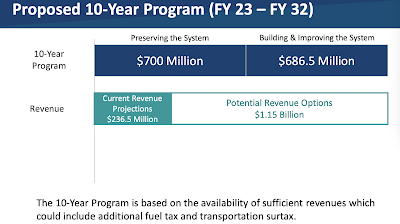 It appears the County BACKED into their "NEEDS" "WANTS" from the total revenues estimated to come from a new huge 1% sales tax hike AND a big gas tax hike.
Below are the storyboard charts presented at the County's February 9th meeting reflecting some of the misleading information and questions that need answers.
The 1st chart used by the County was made up by the TPO. These numbers assume 100% of a reauthorized 30 year one-half percent infrastructure tax (the current infrastructure/stadium tax expires in 2026) goes to transportation with none going to any other new infrastructure such as parks, fire stations, police, other capital projects.
The Tampa Centric 5 sit on the TPO Board. We understand it was Commissioner Kimberly Overman who specifically requested the County use a made up chart from the TPO. She should know better.
Why were there no numbers associated with "Major investments for economic growth"? Because in the details of the LRTP, this category funds rail projects costing Billions and Billions of dollars. The County and the TPO want to hide that information. Below is our chart of the real State of the System. This is the result of a growing County who has been holding road funding hostage for a massive rail tax. Shameful! 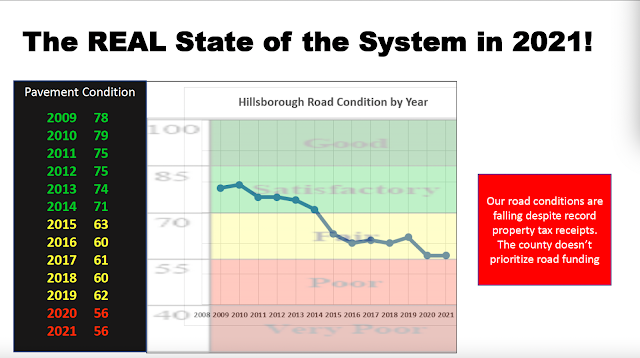 This County's chart below reflects operating expenses but leaves out Revenue Streams. What is the County spending $664 MILLION in a category they call "Other"? Why is the County spending in "Other" more than 2 times what it is spending on transportation? Only $84 MILLION of FY2022 dollars - that includes a one-time spend of $35 MILLION from federal America Rescue Plan funds - is included in the County's Transportation Program. The rest of the $353 MILLION are dollars carry forwarded from previous years....and the County does not tell the public that.

The rest of the storyboard Charts that display different categories of Transportation projects are real doozies. Many reflect 6 years of revenues against 10 years of needs so the needs are greatly inflated vs the revenues. That is fraud. 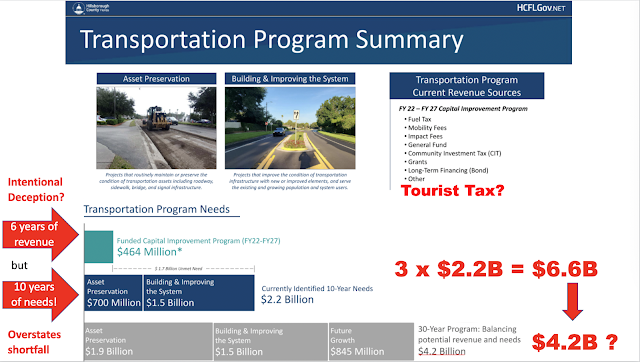 Is Hillsborough County NOT allocating ANY funds to transportation after FY2027? That is impossible. The county compressed the 20 years of "needs" in the TPO's LRTP funded at $2.2B into 10 years grossly overstating the needs in the next 10 years. The County keeps only showing the expense side and no revenue numbers.....to intentionally mislead and confuse the public. 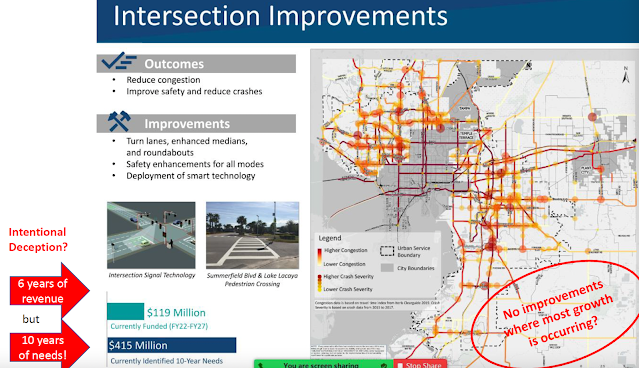 The County states they need to increase funding for pedestrian and bike facilities by over 500%. The County again estimates the needs without providing any estimates of the revenues. 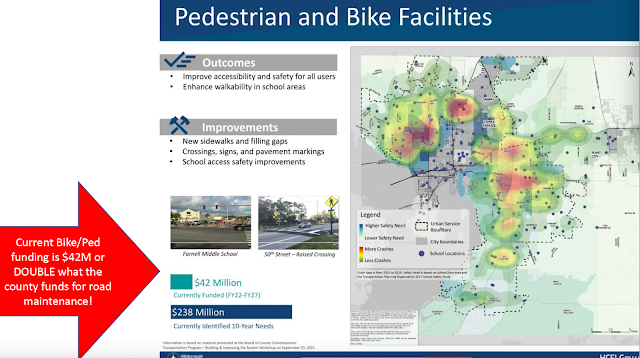 There is a total disconnect between the County and the TPO's LRTP. The LRTP claims Trail needs can be met for 50% less than the county states. 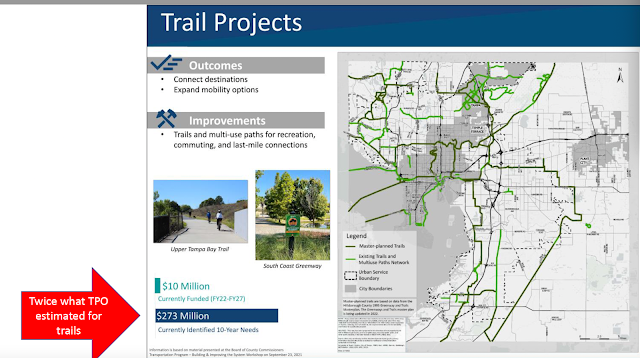 The County COMBINED two SEPARATE CATEGORIES from the TPO's LRTP into one. Complete Streets aka Road Diets should NOT be in the same category as Roadway Capacity. This is done to mislead the public to think they are getting hundreds of millions of dollars for new road capacity when they will not. What is totally left out is the massive 30 year 1% sales tax hike will only fund $545 MILLION or (about $18 MILLION a year) of new road capacity (only 1-2 miles of new capacity a year) over 30 years. But the County will get 350-450 miles of road diets. 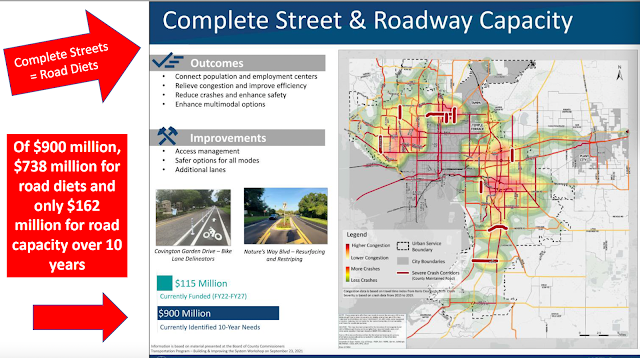 These charts are unacceptable. The numbers on these storyboard charts are questionable and intentional misrepresentations. The County has launched a fraudulent campaign to make the residents of Hillsborough County think there is no money for transportation - and the only funding options available are a massive 1% $18 BILLION sales tax hike and a 5 cent/gallon gas tax hike.
That is nonsense!
Expect the same confusing misinformation disinformation gobblygook in the next public meetings as the rail tax push rolls towards November. The county, cities and HART will tell you they have no money over the next 10-30 years to maintain, let alone improve the transportation system in the county. They will claim AGAIN that a massive sales tax is the only solution.
Go to the County's transportation meetings or contact the county commissioners here. 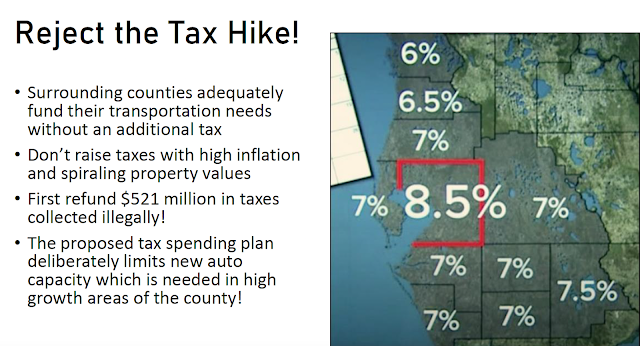 With five of the six incumbent commissioners running for re-election in November, make any tax hike propossed an election issue.
Taxpayers must not give their consent to this latest sales rail tax hike scam.
No tax hike is needed to fund the transportation NEEDS in Hillsborough County. That is the Truth!
Posted by Sharon Calvert at 3:18 PM