The Hillsborough County Transportation Planning Organization (TPO) has been pursuing tearing down I-275 north of downtown Tampa for years. In October just before the election, TPO staff stealthily submitted a Federal grant request for over $1.2 million to study replacing I-275 North with a street level transit Boulevard.

But the TPO's foolishness pursuing the absurd proposal may be coming to an end. The TPO has scheduled a meeting on Wednesday, January 25th from 4-4:30pm to consider canceling that "tear down interstates" Federal grant.

Citizens who oppose the "tear down interstates" nonsense and wastefully spending their tax dollars on a costly Boulevard proposal that will never happen, can sign up to speak in person or virtually here. Comments can also be emailed to tpo@plancom.org by 5pm tomorrow January 24th.

Below is background information regarding this issue and how the costly and ridiculous proposal was pursued.

In 2017 the TPO provided USF architecture student Joshua Frank, who is no transportation expert or traffic engineer, an opportunity the TPO provides no other citizens. The TPO invited Frank to present his 30 minute presentation about tearing down a major portion of I-275 and replacing it with a very costly street level Complete Streets Boulevard.

Hillsborough TPO considered tearing down I-275 such a high priority they want to waste taxpayer dollars on such foolishness. In October right before the November election that impacted the makeup of the TPO Board, TPO staff submitted a federal grant requesting over $1.2 million of your tax dollars to study the "I-275 Boulevard Conversion Concept".

But the TPO did not want others to know what they did.

A copy of their $1.2 MILLION grant request was never transparently provided to the public or to the then TPO Board members for approval before TPO staff submitted it to the Feds in the Biden Administration.

TPO staff also did not provide a copy of the grant to FDOT before submitting it. FDOT is responsible for maintaining I-275 and all our Interstates in Florida. Our interstates are funded by state and federal gas taxes not with local funds.

This is like someone who rents a house and pursues demolishing part of it to remodel without telling the owner of the house.

I-275 is a strategic transportation corridor used by residents, tourists and businesses throughout Tampa Bay. It is an evacuation route. Hillsborough TPO did not tell the other Tampa Bay counties about their "I-275 Boulevard Conversion" grant request either.

The entire Tampa Bay area would be negatively impacted by removing I-275 north of downtown Tampa which also includes access to I-4.

Therefore, in December, I brought the Hillsborough TPO's "tear down the interstates" shenanigans and their "I-275 Boulevard Conversion" grant request to the attention of elected officials from Pinellas, Pasco, Polk, Citrus, Hernando, Manatee and Sarasota counties.

My public comment to those regional officials starts at about 4:30 of this meeting video. I requested these officials reject Hillsborough's pursuit to tear down I-275, stop the road diets in Tampa Bay and focus on fixing and improving our roads.

Hillsborough TPO member and County commissioner Harry Cohen and Hillsborough TPO's Executive Director Beth Alden were at the regional meetings I spoke at. After I spoke, they felt compelled to try to rewrite history and provide cover for the TPO's own actions.

The Tampa Bay Business Journal (TBBJ) reported that Alden admitted the TPO requested the over $1.2 million federal grant because "We have heard from a small group of our community members who would like us to look at the removal of I-275."

TBBJ also quoted Commissioner Cohen saying "I want to reiterate that I don't think there is any support for tearing down 275."

But it was Harry Cohen, then a Tampa City Council representative on the TPO Board, who introduced Joshua Frank to present his I-275 tear down/Convert to Boulevard presentation at the August 1, 2017 TPO Board meeting.

The TPO's actions after Frank's presentation clearly show the TPO has been pursuing tearing down I-275 ever since.

In May 2019, the TPO added the "I-275 Boulevard Conversion" to their Work Plan without considering anything including any estimated cost.

In 2019-2020 the TPO hired consultant Sam Schwartz for $150K - without going thru any bid process - to begin studying the I-275 tear down/Boulevard Conversion. According to this 2019 report about that study, the Boulevard would "allow for protected bike lanes, places to walk, along with a light rail or another modern mass transit system along this corridor."

The Sam Schwartz contract was shut down when the actual cost for such a study was estimated to be over a million dollars and the TPO did not have the funds to pay for it.

"Coincidentally" in August 2021, the TPO appointed the "Tear down I-275 and Replace it with a Boulevard" Joshua Frank to the TPO's Citizens Advisory Committee (CAC).

In December 2021, Alden informed the Board about a new Federal grant which can be used for interstate/highway/infrastructure removal.

And Voila! The CAC, who has no TPO decision making authority, told the TPO to submit the grant. The TPO did without informing the entire Board or FDOT.

Commissioner Cohen is confused. Submitting the grant request for over $1.2 million displays great support for Joshua Frank's I-275 tear down proposal.

The TPO had to create a "narrative" for their grant. Page 1 of the grant "narrative" begins with: 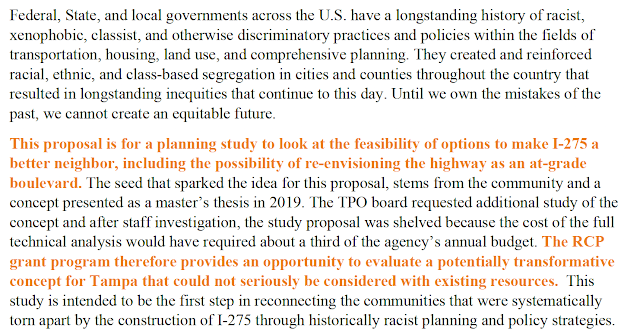 Read the entire TPO grant. The TPO's I-275 Conversion Concept proposal is not about mobility. It is a taxpayer funded PR campaign to target the same small group of people who already support the "tear down the interstates" nonsense.

You can understand why TPO staff never provided a copy to the TPO Board or FDOT before it was submitted to the Feds.

The TPO should not be seeking federal grants for over $1.2 million because a small group of transit activists decided "they" want to replace I-275 with a street level Boulevard.

All evidence points to the intentions of the TPO to replace I-275 with a street level Boulevard. The evidence is irrefutable.

Therefore, I attended the January 11, 2023 TPO Board meeting and handed the TPO Board a package of evidence of their own actions. The package includes a historical timeline of TPO Board's actions to pursue the "I-275 tear down/Boulevard" concept. That package can be found here.

My public comment to the TPO Board can be heard on the video from the 1/11/2023 TPO Board meeting starting at about 15:36. I specifically requested the new TPO Board to:

Sunshine is the best disinfectant, Truth has no agenda and the TPO cannot rewrite their own history.

Now it's time to send the TPO's "tear down I-275/Boulevard Conversion" foolish pursuit to the ash heap.

Please take a few minutes before 5 pm tomorrow to email tpo@plancom.org to tell the TPO to cancel the I-275/Boulevard Conversion Federal grant, stop wasting taxpayer money and resources on such nonsense and focus on fixing our roads.

Posted by Sharon Calvert at 2:02 PM