Treat Tampa's municipal election in March as important, if not more so, as a general election.

Tampa voters can defeat Mayor Castor the Disaster by getting out to vote in numbers not seen for municipal elections. They can make Disaster Castor a one-term Mayor. 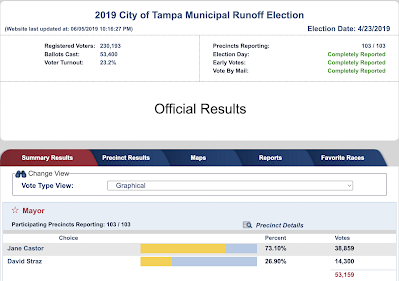 Jane Castor became Mayor of Tampa with only 38,859 votes that was 16.9% of the total Tampa registered voters at that time. She has no mandate.

Castor claims expanding and transforming the Tampa Streetcar into a modernized light rail system is Tampa's highest transportation priority. This project will benefit wealthy downtown developers the most and probably require more road diets to build.

In 2019 Disaster Castor appointed herself to be a member of the HART (transit agency) Board. On her watch, HART's finances have been run into the ground and HART is going insolvent. Disaster Castor supported both failed All for Transportation transit tax referendums that were intended to cover up HART's huge financial problems.

According to a November 2021 Fox13 News article (emphasis mine):

While some drivers would like to see every penny spent on new and bigger roads, Tampa’s mayor says we need to change our view of mass transit.

"Mass transit in the south is more than two people in an SUV," said Mayor Jane Castor. "We have to get people used to riding the bus, to riding the streetcar and seeing that as a very reliable and safe mode of transportation."

Tampa's budget has increased from $900M to $1.2B but not a dime of the increased revenues has gone to fixing roads. This is why local roads throughout Tampa, including downtown and South Tampa, look like roads in San Francisco.

While Tampa will subsidize road improvements for wealthy developers, many local Tampa roads are sinking and are pot holed filled disasters that have not been properly maintained for years. They are an embarrassment to the city of Tampa.

In 2019, Mayor Disaster Castor kicked off a Transportation Advisory Team of members she said were "transportation experts". 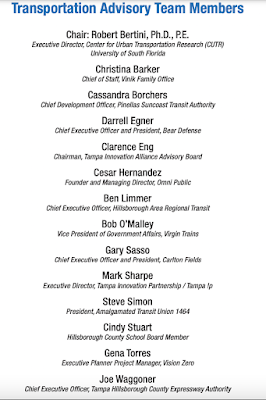 This team is not transportation experts, they are mostly transit advocates, lobbyists, and special interests including All for Transportation's  Christina Barker - who lives in Pasco County.

This cast of characters did not recommend any road improvements in Tampa. Instead they recommended:

We bet the vast majority of drivers in Tampa prefer their tax dollars be spent maintaining and improving Tampa's local roads.

That is not going to happen as long as Jane Castor is Mayor.

Castor was the former Tampa police chief but she allowed George Floyd violent rioters to burn down businesses and loot in June 2020.

As we reported in 2019 when she first ran, Castor is a Tampa Swamp creature. Jeff Vinik, the largest crony donor to All for Transportation, was Castor's largest donor in 2019.

Castor's partner since 2009 is Democrat Ana Cruz, the daughter of former Democrat State Senator Janet Cruz. Ana Cruz is the managing partner for one of the largest lobbying firms in Florida, Ballard Partners.

Ana Cruz is a long time Democrat political strategist who was a spokesperson for both of Hillary Clinton's Presidential campaigns and was an advisor to Joe Biden's 2020 campaign. According to Wikipedia, "she [Ana Cruz] is working with the Biden administration on implementing progressive policies (emphasis mine).

Janet Cruz won't go away. Immediately after she was defeated by Republican Jay Collins on November 8th, she filed to run for Tampa City Council on November 16th.

This is a display of nepotism at its finest.

Castor's disasters includes choosing a contentious police chief who was recently forced to resign when she tried to use her position to get out of a traffic ticket and  appeared to not live in the city of Tampa.

Jane Castor is not transparent and thinks she is Tampa's unilateral decision maker.

According to this article last April about a new development (emphasis mine):

Mayor Jane Castor said that she approved Tampa's 'City Center at Hanna Avenue' after more than five months of councilmen and local leaders asking who was responsible for the controversial project.

Her admission comes after multiple city council meetings since November where construction experts and city council members repeatedly asked who was responsible for green lighting the project, which jumped from $10 million to $108 million without a public bid, among other glaring problems—including initial lack of participation from unions and the Black community.

Not only did Castor avoid answering the community's important question until yesterday, her city attorneys pushed back on the idea of appearing before council to discuss the project back in March.

In this article from April 2021, "Pay to Play" Jane "awarded a multi-million dollar construction contract to Miami-based Related Group, which donated $10,000 to Mayor Jane Castor’s election PAC and currently employs her nephew". The Related Group failed to disclose on the required RFP conflict of interest form that Castor's nephew Alexander Castor is the Asst. Construction Manager for the contract.

In August 2021, Castor requested all city employees be COVID vaccinated by September 30th and required those employees not vaccinated to wear N95 masks and test weekly.

With Disaster Castor, Tampa taxpayers will never see their roads fixed, Tampa's budget properly prioritized or transparency and accountability from the Mayor's office.
These issues will only get worse if there's the nepotism team of Castor/Ana Cruz/Janet Cruz in place.

Tampa voters can stop the nonsense and costly disasters from Mayor Jane Castor... by voting her out of office in March.

Deadline to register to vote is February 6

Posted by Sharon Calvert at 3:31 PM