There may be more options for City Council on Pier decision 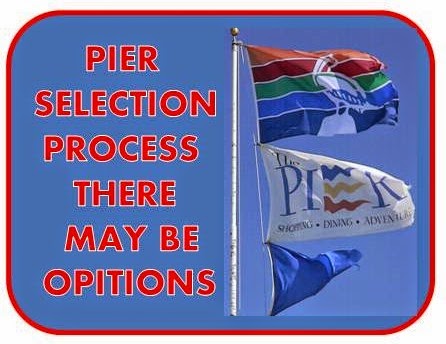 Steve Nichols Channel 13 has raised an interesting question in his Fox News 13 piece: What Happens if council can't agree on a Pier design?
Steve explores the issues raised by William Ballard in his Letter to City Council which is reproduced in its entirety below.

To:  The Honorable Charlie Gerdes, Chair, and Members of City Council of
St. Petersburg, Florida

From: William C. Ballard, a resident and registered voter of the City

Subject:   Options for City Council in the event the pier design selection committee report   to Council accords the number one ranking to a design concept which was not  favored by the City’s voters (as determined by the City’s own non-scientific  survey and confirmed by St. Pete Polls scientific survey)

The writer is a licensed attorney in the state of Florida, but he is writing only in his capacity as a citizen urging a course of action upon his city’s governing body.  No reader should regard the writer’s statements or opinions as legal advice directed at him or her.  For advice on the legality of the courses of action discussed in this memorandum, consult your own attorney.

Under Article III of our municipal charter, all legislative powers are vested in City Council.  The Mayor is the chief administrative official.  City administration can recommend, only Council can legislate.  Based on the conduct, on March 20th, of the City administration’s representative, who chairs the pier design selection committee, it appears obvious that City administration is determined that the inverted pyramid will not remain on our waterfront and that the selection committee is being steered to achieve that result.  The committee chair’s dismissal of all pier businesses other than those operated by the Gonzmarts as “unsuccessful” despite many of them having sustained themselves,
supported their owners and employees, and satisfied pier visitors for over ten years prior to their being forced out was, in my opinion, an odious misrepresentation of the facts that has prejudiced the integrity of the selection process.

The form of the resolutions to be recommended to you following the submission of the 2015 pier design selection committee’s report are likely to be similar in form to those submitted to Council on February 2, 2012 relating to the report of the jury of the 2011 Pier International Design Competition.  Both competitions were conducted pursuant to the Consultants Competitive Negotiation Act (CCNA).

The first resolution submitted in 2012 acknowledged receipt of the report, confirmed that the jury had completed its duties, and ratified the jury’s dissolution.  The second resolution approved the jury’s ranking, authorized the mayor to negotiate with the first ranked team, declared that the A/E agreement would be subject to approval by Council, and declared the project budget.

Assuming that similar resolutions are submitted to this Council following submission of a pier design selection committee report, each Council Member has the power to vote No in response to any motion to approve a resolution which includes approval of the report and authorization for negotiations with an A/E team.  If the motion does not command a Yes vote from majority of the Council quorum, this CCNA RFQ project will have be concluded.

This present CCNA process was initiated by an RFQ issued August 11, 2014.  Relevant provisions of this document include:
·         “All documents prepared and submitted in response to this RFQ project shall become the property of the City and the City shall own all ideas, documents and materials developed in response to this RFQ.  All documents prepared are subject to reuse by the City in accordance with the provisions of §287.055, Florida Statutes.”  [page 67, ¶11]
·         “The City has the right not to proceed with this project at any time.” [page 17 – Post Selection]

My own legal research disclosed no published decision under the Florida CCNA in which an agency (a municipality is an agency under the CCNA) which has refused to approve a selection committee’s ranking report, has been compelled to commence negotiation of a design contract or suffered a judgment at the instance of a design professional.  The CCNA specifies no such remedies.  In Board of Public Instruction v. Doran, 224 So.2d (Fla. 1969), our Supreme Court stated: “Statutes enacted for the public‘s benefit shall be construed in a manner most favorable to the public.”  A court would be reluctant to construe the CCNA so as to require  a municipality to enter into a contract for millions of dollars for design services for a project which its governing body has decided not to build.  Moreover, the City’s contractual right under the RFQ not to proceed is an effective deterrent to such claims if a project is terminated.

The City has benefited from The New St. Pete Pier Design Competition.  Council and we citizens have been exposed to visionary concepts for re-use of the inverted pyramid, partial use of the inverted pyramid’s elements, and novel plans for the pier and pier uplands.  We have cost estimates for these design concepts.  And, as noted above, the City now owns those concepts.  We know with considerable clarity which of these proposed project concepts is attractive to a strong majority of residents, and those which are rejected by a strong majority.

We have learned more.  Thanks to the Terracon report of August 1, 2013 on the condition of the caissons supporting the inverted pyramid, we know that the concrete is in generally good condition with no significant physical damage.   The Kisinger Campo & Associates report of August, 2014, provided the City an evaluation of the inverted pyramid’s steel structure.  They found limited corrosion activity after nearly 50 years in service.  They concluded that extending  the design life of the building structure for an additional 75 years could be achieved with repairs, reconstruction and other modifications.  This report was part of the package provided the 2015 design contest participants.  Teams with highly competent engineering consultants concluded that the inverted pyramid could achieve a new 75 year design life by way of repairs, modifications and new design features included in their budgets.  Destination St. Pete, for example, will gut the building, replace interior systems and install a hurricane proof glass skin outside of the structural frame.  That frame, for the most part, will be within a weather-tight, mostly air conditioned structure.  (Yes, I advocate Destination St. Pete.)

Lastly, you know more about the direction of the Downtown Waterfront Master Plan. In three months it will be before you for adoption.

If you are forced into this strategy, I urge that you define the project in terms of the Destination St. Pete Concept.  This concept is the one wanted by a great majority of the people who will pay for this project and, because it would be their pier, they would be more likely to use it.  It was produced by a design team that is eminent in the true sense of the word.  This concept has minimal impact on DWMP possibilities.  Implement this concept and The Pier and Spa Beach come back to life. The City keeps moving forward.

I also urge that planning commence for a waterfront restaurant site in Pelican Parking Lot.  This is the only way to achieve the critical mass of visitor activity that happily feeds on itself.   (Read the 2015 Lambert report.)  Consider an RFQ for a restaurant development that includes some retail space, all funded by the developer, with the project contingent upon a referendum authorizing the developer a lease of sufficient duration to make the project feasible.  This would have to be done in a way that assures the City’s residents that they are not opening the door to overdevelopment of the uplands.

I believe this is the path to a successful pier.  This path was substantially laid out by the Pier Advisory Task Force in 2010.

Comment:
Janelle Irwin has an interesting analysis in her saintpetersblog Post: Latest development in Pier saga may give City Council more power .

The real news here is the shift of City Attorney John Wolf from what had been a fairly staunch support of the up or down vote. When questioned by the Mayor regarding the Ballard letter, according to the Nichol's report, Wolf replied, "Yes, Mayor they could do that, adding there are other options for the city council.

The other thing worthy of note is the declining level professionalism coming from the mayor's office.

I think we should expect a little more from the million dollar Kriseman Mayor's office.

With Charlie Gerdes as Chairman and a lot of public scrutiny, City Council is not going to roll over and create a public fiasco on the Pier. Kriseman needs to gather it all up, put a lid on his band of lackeys and come to grips with the fact he is about to go 0 and 2 on the Rays and the Pier.