I am a big one for not reinventing the wheel so if you would like to read a very thoughtful review of the current status of the St. Pete recycling program click saintpetersblog: Janelle Irwin, Patience needed in recycling battle.

Since I don't have to deal with the issue personally, I prefer to take a bit more light hearted view.

First off, this is a major screw up by the Kriseman administration, but in their defense there is a good chance the equipment, trash cans and trucks, were already well on the way to being picked before the Kriseman team took office.

Since the Rays and Pier are the really big ticket items, spending a lot of time checking on some garbage trucks and trash containers probably seemed like a poor photo op and a waste of time.

As I have pointed out before; in government as in most everything else the devil is in the details and the Mayor and his team seems detail challenged.

If their go to guy, Mike Connors, had spent a little more time on recycling and a little less time getting the Pier torn down the Kriseman administration might be better off on a number of fronts.

For crying out loud these trucks are huge and there are probably garage apartments in Old Northeast with fewer cubic feet than one of these blue behemoths.

If you drive around town the blue cans are everywhere and they look like some form infestation or outbreak. Measles came to mind. Blue blots everywhere. 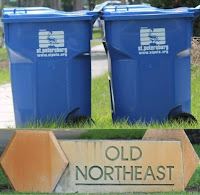 I have a couple of friends who live in Old Northeast and over some drinks with one couple, who have a lovely restored home in Old Northeast (alley trash pickup), after just a few comments I decided making jokes about all of this was just not a good idea.

I caught up with the truck pictured above and when I started taking pictures the driver quickly sped through the CVS parking lot and headed the wrong way down a one way street and out of view. I rested the attempt to follow and never saw the truck again. I am not sure but I think he may have picked up a blue Fiat 500 by mistake. (Just kidding about the Fiat)

Like most writers and reporters I took the obligatory drive through Old Northeast and Old Southeast down rows really expensive homes now fronted with big blue trash containers, some overflowing, some probably empty, some neatly nestled between two parked cars requiring the truck driver to dismount and move the can out where his very expensive truck can actually pick it up.

It kind of looked like the Clampetts and their entire community had relocated to Old Northeast.

Go ahead hum the tune...you know it.

Could it be that the Mayor, who lives on the "other" side of town is sending a not so subtle message to many of those who likely didn't vote for him?

Probably not. That would way to Chris Christie like (the bridge) and I don't think the Dream Team is that clever anyhow.

For now all of this should bring a smile to your face, unless of course you are one those million dollar home owners who have a big blue trash can setting in front of your well manicured yard.

I hope Janelle Irwin doesn't find it too scary that she is the current voice of reason in my mind but she is spot on. All of this is going to take some time to sort out and stamping your feet and screaming like 2 year old won't speed up the process.

For now either drag the "damn can" out to the curb or opt out and throw your crap away like you have been.

And, if you happen live in Old Northeast or Old Southeast and decide to get one of those Fiats or Smart cars; first I would not get a blue one and second I would park it in the alley. It should be safe there.