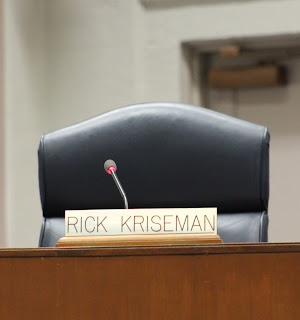 
I attend a number of St. Pete City Council meetings and watch a few more on the City's cable television channel.

What I rarely see in person or on TV is the Mayor of St. Petersburg, Rick Kriseman, sitting in his designated chair on the dais. When he is on the dais he rarely looks happy about it.

The citizens of St. Petersburg should take that as serious disrespect.

Tax payers pay this guy a lot of money and he only does them the courtesy of showing up sometimes for the presentations so he can get the photo op and when he is pushing some major issue. It would seem the rest of the City Council meetings and the business of the City is simply beneath him. Even more irritating is when he sends one of his handpicked, non elected and not particularly qualified dream team to keep his seat on the dais warm. That to me is the ultimate disrespect since nothing in the City Charter authorizes any of these people to actually stand in or sit in for an elected official.

More often than not the chair is simply empty.

Kriseman has taken the run and hide position so people speaking open form or on other issues cannot address him directly. His absence also eliminates any public dialog with City Council.

Kriseman has never been known for being particularly quick on his feet in political or challenging discourse and not being on the dais eliminates the possibility of a political faux pas. 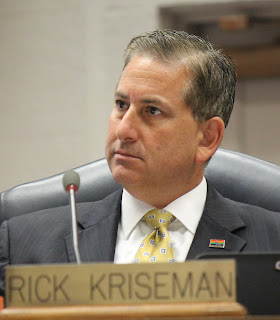 The citizens of St. Petersburg are not beginning to get there, money's worth from Kriseman or his dream team, nor are they or City Council getting the access or the respect they deserve.

The Mayor is the leader of the City organization that's the job Rick Kriseman was elected to do.  While his outward disrespect for the office and the people may make him feel a bit more regal in his role it won't move him from Mayor to King.

It's time for the Mayor to show up for City Council meetings stay for the whole meeting, make constructive comments, express some compassion and engage his constituency.

Maybe if all of that is just too much for Rick Kriseman to stomach, St. Pete citizens should consider making the guy who is currently doing all of that, Karl Nurse, the next Mayor.