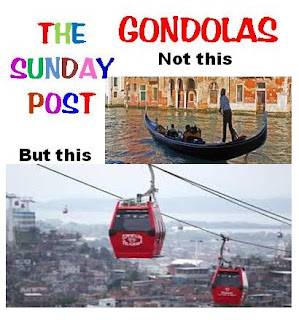 St. Petersburg, Fl
Opinion by: E. Eugene Webb PhD
Author: In Search of Robin
There has been a lot of chatter in Pinellas County and St. Petersburg about gondolas.

Not the water kind, although the thought of Rick Kriseman paddling a bunch high-tech company executives accompanied by a group of smiling millennials through a newly constructed waterway serving only downtown is fascinating, what we are talking about is the elevated version more commonly called aerial tramways

In St. Pete, the name is Aerial Cable Propelled Transit which I would expect to move to County-wide  status as an authority dubbed the Aerial Cable Transit Authority or the ACTA probably chaired by Darden Rice.

If you need some detail, here are the links:

While this may seem like a new idea, back in the mid 90s, I was part of a very short-lived  team that put together a plan for a sky tram connecting Tyrone Mall, Cross Roads Shopping Center and the then generally undeveloped area where Best Buy and Marshals and Publix are now located. The plan with three stations would have allowed shoppers to shop all three areas without driving from place to place.

We were quietly but politely laughed off the stage. Do not bother to do a public records search you won't find anything.

You have to give the County staff and the Kriseman team some serious credit for thinking out of the box on this one.

There are significant advantages in the idea. Aerial tramways are much less disruptive to construct. They require minimal ground surface compared with other forms of transportation almost eliminating displacement and imminent domain issues.

The possibility of aerial tramway development around commercial areas in Pinellas County and providing transportation to and from the beaches is intriguing to say the least.

All of this is part of a federal grant application, so we will have to wait and see how it goes.