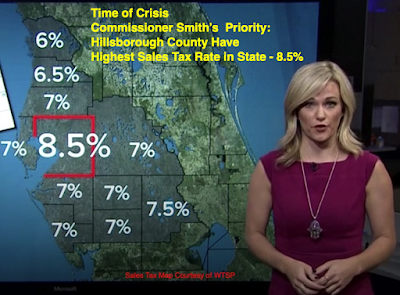 As we posted here, Hillsborough County Commissioner Mariella Smith's priority, during this time of coronavirus crisis and its economic devastation, is to put a $16 Billion transit tax referendum on the November ballot.

The Federal government began sending rescue checks out to financially struggling Americans this week as businesses remain closed, unemployment has skyrocketed and we are shutdown to stay healthy.

While the Federal government, in one hand, is providing rescue checks and stimulus to devastated businesses trying to keep them from permanent closing, Commissioner Smith wants the county to take away some of those funds with the other hand.

The County has not publicly reassessed the county budget that has taken a huge negative hit and there are still many uncertainties.

But Commissioner Smith's priority is for Hillsborough County to have the highest sales tax rate in the State even as we may be head into a major Recession.


Smith added agenda item F-2 to tomorrow's April 15 BOCC meeting agenda to rescind the Board's previous vote on April 1st to NOT pursue a massive transit tax hike at this time of crisis. 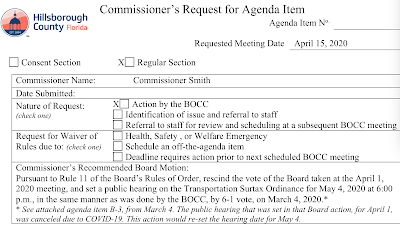 Smith's agenda item is being driven by a statutory deadline: "we must hold a public hearing by May 4, in time to send the referendum to OPAGGA by May 7, 2020."

Smith is so desperate to put this $16 Billion transit tax on the November ballot in Hillsborough that she does not consider the state's budget passed last month was also negatively impacted by the economic shutdown.

The revenue estimates used for the $94B state budget that begins July 1st are now wrong. We should not be surprised when the state legislature is called back into session, perhaps in June, to redo the entire FY budget. Priorities will have to be decided and funds go to the highest priority needs.

Hiring outside auditors for OPPAGA audits for DISCRETIONARY local tax hike referendums may not be a state priority at this time, especially with much uncertainty.

But Smith's "emergency" is putting a massive DISCRETIONARY transit tax on the ballot not the health and financial struggles of her own constituents.

Smith's $16 Billion All for Transportation (AFT) 2.0 rail/transit tax proposal has never been vetted by anyone.

Statutorily the county commissioners have the appropriations authority for the transit tax proceeds. We submitted a Public Records Request to the County in February asking for the list of projects the proposed AFT 2.0 tax hike will fund. The response we received from the County is there is no list of projects.

In addition, Smith's proposed $16 Billion transit tax forces taxpayers in Hillsborough County to hand 40% ($6.5 Billion) of all the 30 year tax proceeds to the transit agency HART.

HART has never asked the County for $6.5 Billion dollars and has never presented any plan to the County or presented to the public for how to spend those dollars. HART does not need those Billions except to fund costly rail projects in the city of Tampa - paid for by taxpayers in unincorporated Hillsborough.

HART has no ridership studies and no cost estimates for the costly rail projects but Smith wants taxpayers to simply hand $6.5 Billion to HART - no questions asked.

Less than 2% in Hillsborough County use transit before the virus crisis. The Coronavirus has taken a huge chunk out of transit ridership. With transit a petri dish for spreading germs, we have no idea how long it will be before people will feel comfortable using transit in large numbers again.

Smith's proposed transit tax dedicates Billions for costly transit when ridership has totally tanked while providing ZERO dedicated funds for new road capacity. Her proposed tax does not even fund road capacity improvements needed for the new schools planned over the next 20 years.

As we posted here, Smith publicly stated at the February 19 BOCC meeting that we must get cars off the roads with transit. Smith is anti-car. She opposes improving interstates, even malfunction junction, and supports tearing down 11 miles of I-275 north of downtown to replace that major transportation corridor, that serves as an evacuation route in Tampa Bay, with a costly rail boulevard.

Smith's transit "choice riders" she dreams about may be gone. Entire paradigms about transit and transportation may shift.

People may feel more safe and comfortable using their own Personal Protection Mobility Platform (PPMP) - their own cars and individual vehicles - than using transit.

Smith appears shameless in her heartless lack of compassion at this time of a health and economic crisis. Pinellas and Orange County wisely decided to not pursue putting any discretionary local tax referendums on the November ballot. Orange County made that decision even as they know they are required to pick up the operating and maintenance costs for SunRail in January 2021.

The County has normally held two public hearings for tax hike referendums but Smith's priority is an audit deadline whose runway is about to run out. Trying to hold one virtual public hearing meeting on May 4 about putting a $16 Billion transit tax referendum on the November ballot at this time of crisis seems unfair to the public.

Smith's 1.4 million constituents in Hillsborough are currently focused on keeping healthy, their own financial struggles or whether they will be able to reopen their businesses.

Either Smith is exploiting this crisis for her own agenda and/or she is displaying great lack of judgement.

The public can provide a public comment on Smith's tone-deaf agenda item F-2 at tomorrow's virtual BOCC meeting by following the instructions on the meeting agenda and registering to speak (will be audio only) here.

Higher sales taxes are regressive taxes that hurt the low income and small businesses the most who are already greatly suffering at this time.

Hillsborough County has done no reassessment of anything at this point but apparently Smith does not care.

Because Smith's priority is a sales tax referendum to force taxpayers in Hillsborough County to fund costly rail in Tampa that few will ride.

Smith's priority at a time of a health crisis, financial distress and economic devastation, and any other commissioner who votes with her tomorrow, is for Hillsborough County to have the highest sales tax rate in Florida - 8.5%
Posted by Sharon Calvert at 12:12 PM