Hillsborough County had scheduled 4 Transportation Town Hall meetings to begin on August 3rd. These Town Halls appear to now be delayed until October. 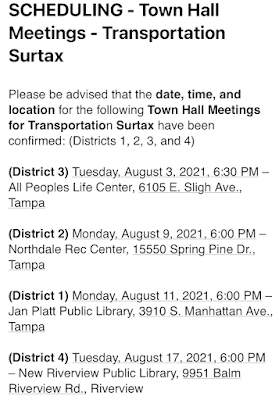 South County, one of the fastest growing areas of Hillsborough County that needs new roads, is ignored.

Ironically, the Riverview Town Hall meeting is at the library on Balm Road. Balm Road is a poster child for the County's poor planning and refusal to properly fund needed road capacity improvements, even for new schools.

As we reported here:

With an AFT $16 Billion dollar tax hike for 30 years, there is still no funding to improve roads where new schools are planned to be built. The school district and parents face overcrowded schools and perhaps double sessions.

The Tampa-Centric Five sit on the Board of the TPO.

This is not just incompetence. This is the intentional neglect to fund our roads. This is a classic case of putting ideology over the County's needs to improve and expand its roads - the County's largest and most broadly used assets.

As reported here, the Times spun a whopper about a recent survey confirming a super super majority reject transit. The actual findings of the telephone survey held between January 22, 2021 and March 11, 2021 is publicly available but the Times failed to provide the link.

The survey data confirms a super super majority rejects transit. 96% of those who reject transit either see no need, already have transportation or believe transit is inconvenient. 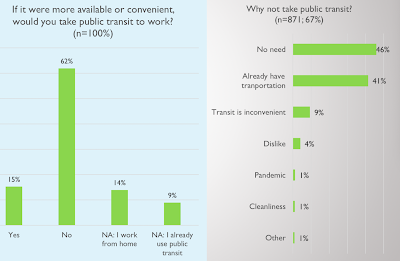 Commissioner Pat Kemp, a long-time transit activist and a HART Board member since she was elected to the commission in 2016, was previously asked according to this report if she ever rides the bus. Kemp responded

"I would like to ride transit more if I wasn't so busy working on the transit issue. ... It's not very amenable to my kind of schedule. I'm not an 8-to-5 in one place type of person."

"There's no way you can do it. For office workers who have set hours and set places, it works very well…I have to have a vehicle."

"I'm in and out of the office all the time, so it would be really inconvenient for me to use the bus system."

Kemp made the case herself for why she and very few others use transit. "Office workers" now working from home have no need for transit. Kemp thinks she's "too busy" to use transit but disregards so many others who have "busy" lives too.

The upcoming Town Hall meetings are a charade just like the 2016 scandal ridden Go Hillsborough debacle. These meetings do not provide opportunities for citizens to make public comment. Just like the Go Hillsborough charade, citizens can look at storyboards (made up by county staff) at various "information stations", talk with county staff, identify areas of concern on a map and then only provide WRITTEN comments.

Like Go Hillsborough, it appears citizens can only speak with county staff and the elected county commissioners do not participate in the Town Hall meetings. That is a big red flag just like not allowing for public comment.

Before Go Hillsborough campaign officially launched in 2015, the County held transportation meetings throughout the county allowing citizens to speak and make public comment. The Eye attended those meetings and the overwhelming majority who publicly spoke wanted their roads fixed.

Fixing our roads does not require a massive 30 year sales tax hike or going into debt for 30 years. Only costly transit/rail does.
Fixing our roads requires the County to properly prioritize its budget. Accountability is sorely lacking at County Center. Transportation is a primary responsibility of local government to properly maintain and improve our roads.
Elections have consequences. The Tampa Centric commissioners intentionally eliminated the $812 Million transportation plan agreed to by a previous county commission board. Yet they want to tie the hands of taxpayers for 30 years, and future county commission boards for 30 years with 30 years of debt. Taxpayers must not be duped by the County's dog and pony show claiming they need a massive sales tax hike to fund transportation.
Taxpayers have not been refunded one cent of the over Half a Billion dollars unlawfully collected AFT rail tax. But the Tampa-Centric Five are marching forward to pick your pockets again because they are beholden to the special interests who will greatly benefit from any rail tax.
Connect the dots....and we know why the County again does not want citizens to publicly speak at their transportation meetings. 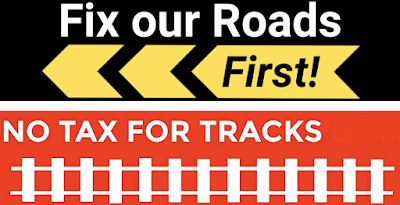 Posted by Sharon Calvert at 9:05 PM