As part of the Hillsborough Transportation and Economic Development (TED) initiative, the county paid a large engineering firm, AECOM, to provide a Hillsborough County Transit Options Assessment.  The assessment was dated May 7, 2014 and a Transit Options Analysis was presented on May 15, 2014.

We recently received these documents via a Public Records Request and uploaded them for easy access. The documents have since been uploaded to the BOCC TED website inconveniently hidden in a document Fixed Guideway Transit: An Estimate of Probable Costs.  We will note that the irrelevant study by Booz, Allen and Hamilton that we previously discussed here was transparently and conveniently uploaded as a standalone document on the BOCC website.

Who was the May 15 analysis presented to? It was not presented at the last Transportation Policy Leadership Group meeting held May 28, 2014.  Why wasn't it publicly presented on the 28th?  Why wasn't this professional assessment given to the media by County Administrator Mike Merrill at his media briefing on July 29th? Other information has been leaked lately by someone in County Center so why wasn't this assessment?

We found out about this study on May 22nd and asked Commissioner Mark Sharpe for a copy.  Sharpe said there was only a preliminary report not a final one and he would not provide us a copy. We should have insisted then because Sharpe could have given us a copy as even preliminary reports or documents can be provided to citizens when they ask.

Back to the study.  At the very beginning in the Executive Summary are the Findings:
The bottom line of this study is forget rail in Hillsborough County.  We do not have the ridership to qualify for the required FTA federal funds to build a train.

AECOM's Recommendations below confirms it would take a huge effort, lots of tax dollars invested and central planning land use efforts to "maybe" one day reach ridership levels that might make light rail transit viable.  However, by then, there is a good chance we will have autonomous vehicles and other innovative services that might make high cost light rail systems irrelevant and certainly unnecessary.
AECOM recommends Hillsborough continue investing in improving and expanding our bus service, such as the MetroRapid BRT to help increase transit ridership.  Even doing that, this study states that a full blown "gold standard" BRT might qualify for FTA funding once "ridership is higher and investment costs are lower".

The criteria for qualifying for federal FTA funds includes: 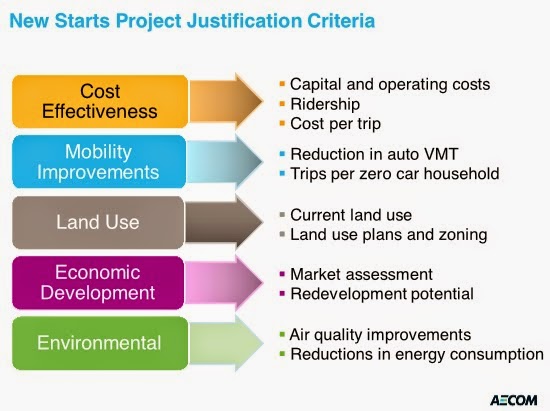 However, some power brokers keep attempting to compare us to others, even Pinellas, where the Greenlight Pinellas initiative is on the November ballot.
According to the assessment, local ridership is:

AECOM looked at numerous past studies and the Hillsborough Alternatives Analysis from 2010.  As taxpayers we should be very glad that the 2010 referendum was defeated.  This assessment states ALL the alternatives would have low to medium FTA rating and would not get federal funds.  NONE of the HART alternatives are cost effective.

It is astounding that we NOW find this out.  Watch out Pinellas!

The assessment honestly states that most of the new rail projects implemented in the US over the past few decades occurred in communities with "existing transit ridership significantly - several times higher - than those currently observed in Hillsborough County". Investment costs at ridership levels today or into the near future would be huge.

The May 15th Transit Options presentation reflects that Bus Rapid Transit (BRT) has the most advantages, including cost, flexibility and ability to attract development.  BRT has the least disadvantages, one of which is recognizing the perception of the "bus snobs".  BRT also does not have the negative traffic impacts that street level rail options can cause.
The presentation also reflects that BRT's capital and operating costs are LOWER than light rail. Light Rail capital and operating costs are TWICE the costs of BRT.

Here's even better news about the cost of BRT vs light rail. The Tampa Tribune reports today "Cleveland’s RTA spent $200 million to build the rapid bus system. A light rail system would have cost $1 billion over the same 9.2-mile route..."

We anxiously await the presentation of the Transit Options assessment and Transit Options analysis done by professionals, AECOM, at the next Transportation Policy Leadership Group meeting on Tuesday, August 12th. Taxpayers paid for this study and we deserve to know what's in it.

AECOM's assessment cannot be spun - it is devastating to any pursuit of light rail in Hillsborough County today. It confirms what we believe Hillsborough needs to do - improve and maintain our existing road infrastructure and improve and expand our bus service.

The most important statement AECOM makes in the assessment is:

We agree. That is exactly what I suggested, almost a year ago, when I participated on the Transportation Policy Leadership Group panel on September 25, 2013 (transcript below):

Inconvenient truths about our local transit cannot be conveniently avoided.
Posted by Sharon Calvert at 11:22 AM