Baseball The hand writing is on the wall 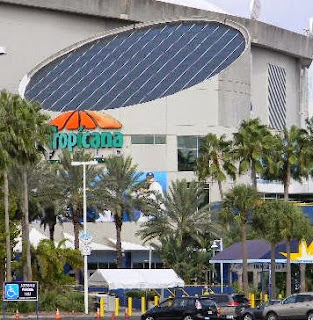 The Rays attendance problem continues to worsen. They are now last in league attendance with even the usually high draw games seriously lacking.  As I have often quoted Bud Selig, "St. Petersburg is not a major league baseball market."

It remains unclear to me why it is so difficult for the politicians to accept the fact Selig was right.

The Kriseman administration has put together another version of the now famous Memorandum of Understanding (MOU) which addresses the development rights issue that seemed to be the reason the last MOU went down the toilet.

Payout money for an early move was also a big issue.

Kriseman has been playing it a bit coy with Council saying he does not want to bring his latest MOU forward until he has enough committed votes for it to pass. Not exactly the way a representative government works.

Kriseman has refused to conduct the economic impact study Council member Kornell asked for the major reason likely being the only really serious economic benefit has probably been for Fergs Sports Bar.

It's time for a Mayor and the City Council to just fess up to the fact major league baseball will not work here. Selig was right.

For now, if the money portion of the MOU is still the issue with Council, how about a counter to the Mayor's most recent "offer": Rays give up all development rights, construction can begin any time, City agrees to keep 1,500 parking spots on the site, payout to move is set at $50 Million this year, reduces $4 million every year with the payout portion of the MOU sun setting in 2026.

It is time to let the Rays look any where they want because unless there is someone in Tampa with a big ego and really deep pockets I don't think there will be a Tampa stadium deal.

With two major league sports teams in Tampa, rising ticket and concession prices and the history of baseball in the bay area, it is hard to imagine a new stadium will simply make all of that go away.