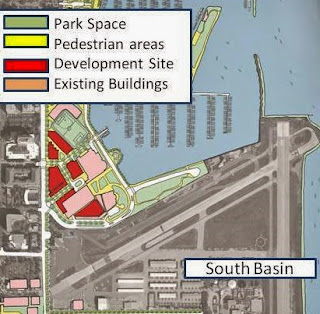 In what seemed to me a heartfelt attempt to get to an acceptable Downtown Water Front Master Plan City Council labored until they just couldn't go any longer Thursday night.

The Hotel Conference center seemed to be a no brainer, with consensus it should be pulled from the Master Plan but the rest of the development parcels designated in the plan became much more difficult to deal with.

At one point there was a suggestion that all of the development areas be pulled from the Plan but that seemed too draconian to the Council.

What struck me was the tenacity that the Consultant and the Kriseman administration held onto the development portion of the plan. Struggling to keep the possibility of a Plan with massive "development opportunities" alive, both the Consultant and the Administration spoke repeatedly in glowing terms of the hotel/convention center, retail along the west side of Al Lange and other possibly wonderful commercial ideas that might evolve.

In the end the Council continued the discussion to the next City Council meeting with instructions to staff that removed the hotel/conference center, took the "Development Areas" out of the South Basin and provided some additional language changes.

The administration will bring back a modified plan.

If all of the Council recommended changes are actually made there will still be a lot to be concerned about in the DWMP. Far to many undefined "Development Areas" remain; the approach to Bayboro Harbor seems completely impractical to name a couple.

The administration harped on the fact that the plan is "conceptual" but defined areas highlighted in red "Development Areas" are a bit more than conceptual.

Even in it's revised form the DWMP is likely to be the biggest threat to the Waterfront ever approved by a City Council.