Sign or Symbol the City of St. Pete may have a Flag problem 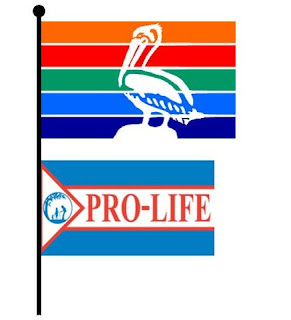 Janelle Irwin has an interesting Post in saintpetersblog: Larry Ahern has his panties in a bunch over gay pride trumping pro-life at City Hall.

You can read Janelle's Post, but the flap is over a request by a pro-life life group to fly the pro- life flag promoting their event 40 Days for Life. The issue, as the pro-life people point out, hinges on the Mayor's decision to fly the Gay Pride rainbow flag supporting the St. Pete Gay Pride event that is held every year here in St. Pete.

I'll leave the abortion argument to those dealing with it and the Gay Rights Flag/Pride thing to that camp for the moment.

Janelle's Post turns into a gay verses abortion rant which I don't quite understand, but I guess that's the point.

There is however a much bigger issue here and that is how the Mayor is dealing what probably seems to him a minor issue.

The Mayor's communication director Ben Kirby's comment on Facebook , "The City flies that flag because the event has a multi-million dollar impact on the city and “it’s the right thing to do”, once again shows the Kriseman administration's complete lack of maturity in dealing with these issues.

So the point is if I bring enough money into town I can get my flag raised over City Hall? 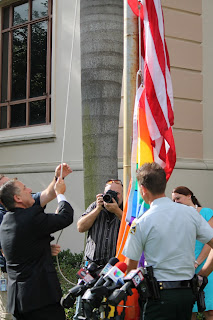 Once the Mayor made the decision to put a special event flag over City Hall he opened a can of worms and now someone has kicked the can over.

I would point the Mayor to former Assistant City Attorney Mark Winn and suggest he ask Mr. Winn about the issue of "signs and symbols". Mark Winn, myself and a number of other staffers had a long running discussion (about 10 years as I recall) about the differences and the precedents involved.

Once the Mayor decided to fly the Gay Pride Flag he at the least set a precedent of some sort, and picking and choosing who can display their flag based on the economic benefit to the City or any other criteria may not be legal.

As to the Mayor not responding to the Pro-life request, it seems the Mayor has a tendency to just ignore those things he doesn't want to deal with and as usual that approach comes back to bite him.

For now the Mayor should set down with group requesting the their flag be flown and work out something before he finds himself in the middle of the Pro-life battle, with a federal lawsuit and another costly distraction caused by poor decision making.

As to the Ben Kirby statement, as I have pointed out before the Mayor needs to put a muzzle on these inexperienced staffers they are only opening up their mouth's long enough to change feet.


Disclosures:
Contributor: Waterfront Charter Amendment (Vote on The Pier)
Posted by Gene Webb at 5:00 AM