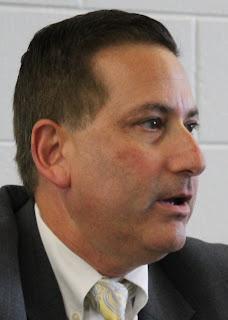 The Kriseman administration has made it clear they are more than willing to go after employees who aren't in agreement with them.

You can get more detail in Janelle Irwin's saintpetersblog Post: Rick Kriseman overturns suspension of employee who called him a ‘clown,’ will pay lost wages.

From the Irwin Post:
According to Kriseman’s communication director, Ben Kirby, the City rescinded the suspension to avoid negativity in the bargaining process currently underway.

“The mayor spoke with Ms. Wynn yesterday. Based on his review of the totality of the situation, in light of the current bargaining process, and in order to avoid negatively impacting the lives of our workers in the bargaining unit, the mayor has withdrawn Ms. Wynn’s suspension,” Kirby said. “He reiterated to her his expectation that we engage in respectful discourse and refrain from name-calling.”

Let me attempt to translate that for you.

The Kriseman team was more worried about looking bad when a major negotiation went bad than reasonable treatment for the City employees.

If the employees union, SEIU Florida, had not stepped in and proposed to make this a negotiating issue, Ms. Wynn would have lost five days pay, and the other unnamed employee would have likely been subjected to a similar if not more dire fate.

According to HR director Chris Guella, the section used for originally suspending Wynn called for employee dismissal for “unlawful or improper conduct either on or off the job, which would tend to affect the employee’s relationship to the job, fellow workers, reputation, or goodwill in the community.”

Unlawful is pretty clear, improper is wide open to interpretation, but I doubt the original writers had social media political comment in mind.

Note the rule, which should be updated to reflect current reality, indicates it is the employee’s relationship to the job, fellow workers, reputation, or goodwill in the community”

The Kriseman administration has made it clear they are more than willing to go after employees who aren't in agreement with them.

The SEIU team is to be complemented for coming to their member's support, and all City employees should be sure they know who they can count on to represent them. It's not the Kriseman administration and certainly not Human Resources and the HR Director.

Think all of this doesn't work? As I write this, my Post Kriseman muzzling City employees  has had over 120 views so far and not one comment.

No matter what the Mayor says in front of the cameras and at those award meetings, City employees now know what he really thinks of you. You are the best as long as you agree with him. If you don't, it appears that your constitutional rights, civil rights and personal opinion mean little.

You might want to consider this come election time. Don't worry about remembering, I'll remind you.