The Rays Second Season gets rolling 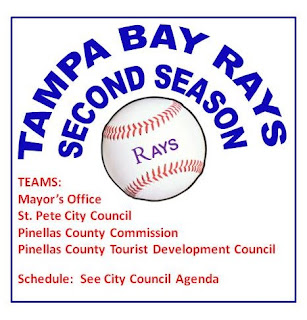 St. Petersburg, Fl
Opinion by: E. Eugene Webb PhD
Coauthor of: So You Want Blog.
For background see my Post The Rays and the Second Season

Widely reported by print and social media St. Pete City Council members are talking baseball one on one with Pinellas County Commissioners. Just the thought of Jim Kennedy and Janet Long having a conversation about anything should be enough to send shivers up your spine.

The Plans:
The Kennedy Plan, The Kornell Plan, The Gerdes Plan, The Kriseman Plan, the Tampa Times Plan and The Rays Plan which is almost the same as the Kriseman plan. There are a couple of more Council members with "ideas" if not plans.

The Threats:
County Commission says tourist tax dollars in play.
The Rays say it's the last deal or no deal.
The Rays don't want to negotiate with eight people (City Council)
The Rays won't pony up any more money, so they say.

There is not a whole lot of detail leaking out about the Council members plans and the Rays are being a bit coy at the moment. All the drama will begin to unfold at the October 22 St. Pete City Council meeting.

The Rays saga is starting to play out like a poorly scripted episode of the FOX series Empire.

The missing piece here is leadership from Mayor Rick Kriseman. For something seemingly this big to get this far out of control Kriseman has to take the fall.

Kriseman, who continues to prove he much more interested in things shiny he can hang his name on than substance, is the one who let all of this disintegrate into a City Council cat fight. If the Mayor had been a bit more willing to share the glory with City Council, the Rays would probably have a deal, and everyone could be focusing on something really important.

The clock is ticking. That according to the County Commission as the Atlanta Braves spring training complex nears a decision point. However, the clock is also ticking for the Rays.

As things continue to unfold in Tampa, developers and big-money players have to be asking themselves would a huge investment in baseball really be worth it. What if we make that investment, and the same 13,000 or so fans are the only ones who show up?

Remember what Bud Selig (MLB Commissioner) said, this is not a major-league baseball market. He said that almost 30 years ago and so far he was right.

So be sure to follow the Rays second season on TV.

Unlike major league baseball games which you must have ESPN or some pay channel to see most of them, the Rays second season is available free on your cable system Bright House Channel 641, Verizon Channel 20, WOW channel 15. Check St. Pete City Council for times and replays.