With the election days away, the All for Transportation campaign funded by billionaires and fronted by millennials must be in panic mode.

All for Transportation spent multi-millions on a deceptive campaign trying to disguise their rail tax as fixing traffic congestion.

But they finally admitted what we have stated all along - their 30 year $16 Billion tax hike is a RAIL tax. 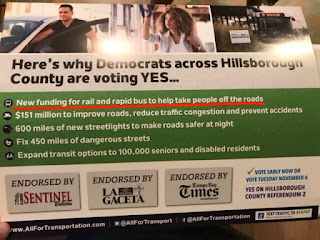 We previously posted that the Tampa Bay Business Journal (TBBJ) as part of the local media cheerleading team for the $16 Billion rail tax hike boondoggle politicized their own transportation paid event.

TBBJ then published this article titled Panelists explore connected vehicles, ballot funding initiatives and transformational transit which is behind their subscription firewall. The article in its entirety can be found here.

All for Transportation activist Christina Barker speaking about the rail tax admits:

It’s based on the $9 billion dollar backlog of transportation projects the community is facing.

Barker confirms their $16 Billion rail tax was written by a few people having drinks in their own echo chamber. There was no deliberative process, no public outreach, no stakeholder involvement, no public hearings, no ability to make compromises.

Barker failed to disclose that the MPO 2040 plan is a 20 year plan (not 30) that was created four years ago and is outdated. That MPO plan does not include Autonomous Vehicle or Connected Vehicle technology, does not include ride share and the sharing economy and does not include Value Capture financing now required by the FTA for transit projects.

That MPO plan was written before mobility fees were implemented. There was broad consensus across the political spectrum that developers should help pay their "fare share" for new growth. This massive tax hike drastically cuts mobility fees developers would pay. It puts the burden of paying for new growth squarely on taxpayers.

And there are projects in the MPO 2040 plan that have already been completed.

Barker failed to disclose that the MPO's 2040 plan includes a BILLION dollars dedicated to new road capacity over 20 years.

Barker failed to disclose that All for Transportation's $16 BILLION tax hike has ZERO funds dedicated to new for capacity for 30 years.

What were those "few" writing this charter amendment thinking or drinking?

Their thinking while drinking was to intentionally exclude funding new road capacity for 30 years and try to force people out of their cars. That is why Barker did not mention new roads or road widening as even being part of their massive tax hike:


I think that these transportation projects, whether it's a safety project, a sidewalk in front of a school, or it's rail or a street car or ferry, we're going to start to see that those investments pay off for our community..

Barker touts their "independent" oversight committee and the "something for everyone" equity line.

All for Transportation posted on FB that "they" were putting together the members of "their" committee. Looks like the same special interests funding the rail tax will have their hands in the taxpayer's cookie jar to fund their agenda. 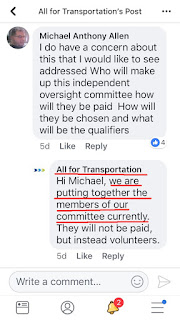 The oversight committee can only oversee that the $16 Billion rail tax is spent as mandated in the 5 pages of regulations in the charter amendment. All for Transportation intentionally made it difficult to change anything for 30 long years without going through another referendum.

All for Transportation specifically prohibits the reallocation of any of the $7-8 BILLION mandated for trains and transit - for 30 long years. That could be disastrous for taxpayers.

Barker claims they are seeing unprecedented support for their rail tax.

And then Barker arrogantly claims at this public event:

But what has happened since that arrogant statement?

The rail tax joined forces with the school tax to jointly push both taxes for a whopping 21.4% tax hike.

Which means the rail tax with no funding dedicated to new road capacity for 30 long years will make congestion exponentially worse.

The All for Transportation $16 BILLION rail tax was written by a few to benefit a few.

All for Transportation's campaign of deception got caught as they have no evidence to back up their exaggerated claims.

In desperation, All for Transportation sent mailers out that finally admits their $16 Billion tax hike is a rail tax.

The NAACP releases a Press Release announcing their opposition to the tax hike.

And now Christina Barker, with her masters degree in political campaigning, is reduced to FB posts begging voters to "vote from the bottom up"

With their deception exposed, All for Transportation has nowhere left to go.

It was a bad week for the Rail tax!
Posted by Sharon Calvert at 9:14 AM