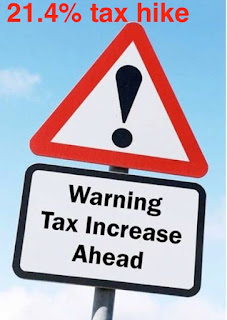 It is unfortunate but hardly unexpected. The school needs and the transit greed tax hike campaigns joined forces to push both tax hikes over the finish line on November 6th.

Over the summer the Vinik funded transit tax hike initiative did not want the school tax on the  November ballot. They magically leap frogged over the school to ensure they got their performance audit completed by the required deadline.

The Vinik bailed out Times even viciously attacked the school board for wanting to put their tax hike on the same November ballot as the Vinik transit tax hike.

When the Times got word the school needs and the transit greed tax hike campaigns were coming together, they quickly published an article trying to dismiss any problem with Hillsborough County having the highest sales tax rate in the state of 8.5%.

If both the need and greed tax hikes pass, Hillsborough County will have the same sales tax rate as San Francisco, CA.

We see what has been happening in San Francisco lately. Is that a model to follow?

The Times ignores that sales tax hikes raises rental and lease rates which can be a double whammy to those most vulnerable and the low income who rent or lease.

And why did the Times misrepresent the total revenue the transit tax would raise over it's 30 year life? The Times knows the transit greed tax is 30 years yet they state the transit tax will raise $8 Billion over 20 years - irrelevant and wrong information for a 30 year tax.

The transit tax hike will raise, using the same growth rate as the MPO uses, $16 Billion or more over 30 years. That $16 Billion is coming out of your wallets and the local economy.

The 10 year one half percent school needs tax hike is probably polling better than the 30 year one percent Vinik transit greed tax.

That is not hard to understand. The school needs tax has specific needed projects the tax will fund and ends in 10 years. The Vinik transit greed tax includes no project list. It's a bunch of mandated spending allocations with 5 pages of regulations wrapped around them so nothing can be changed or funds reallocated for 30 long years.

With a week to go to Election day, desperation starts to set in if polling is hovering around 50% and/or there is still a large number of undecideds. Undecideds most often break voting no. What then does one do?

Buy off your competition.

Vinik's billionaire bankroll can buy off just about anyone. Without Vinik's bankroll, his greedy transit tax hike would not be on the ballot.

Vinik can leverage his financial and campaign resources with the school needs tax hike campaign. In exchange, Vinik can try to ride the coat tails of the school tax he must know has a better chance of passing.

According to this Times article, both tax hike campaigns came together for a joint campaign kum ba ya press conference yesterday.

The campaigns of the transit greed tax and the school needs tax are now pushing to raise the sales tax rate in Hillsborough County from 7% to 8.5%.

And that could turn into risky business for both tax hikes.

Posted by Sharon Calvert at 6:18 PM