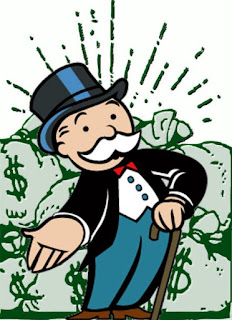 The billionaires are entitled. They buy off the media. They bankroll a deceptive advertising campaign for a massive tax hike that never mentions the word "tax". They want to shut down any debate about their $16 Billion rail tax boondoggle.

That was not enough.

We posted here how the Vinik Times is all in on the Vinik tax hike.

The Times is not the only local media tax hike cheerleader.

Janelle Irwin, who was working for the Tampa Bay Business Journal (TBBJ) and had worked for Peter Schorsch before, was suddenly hired back by Schorsch. Irwin was initially cheering at TBBJ for the tax hike. Suddenly Schorsch hired her back for a short term contract to rah rah for the Vinik rail tax at his Florida Politics.

Irwin writes her pro tax cheerleading articles opinion pieces for Schorsch's Florida Politics without contacting those who oppose the tax hike. She not only refuses to contact formal opposition PAC NoTaxForTracks, she decided to dismiss them. In her poorly written articles opinion pieces, Irwin determines what is true or not about the rail tax without ever speaking to anyone from the opposition. That is not reporting. That is not journalism. That is propaganda.

In 2010 TBBJ hosted a head to head debate with both sides. Back then TBBJ was at least open to having voters hear both sides.

Not so this rail tax go round.

With formal opposition NoTaxForTracks.com on record, TBBJ was approached if they were interested in hosting a panel discussion or debate. Their response was no. They then told us about their "Business of Transportation" event held today.


The Tampa Bay Business Journal brings together a panel of industry experts to discuss current issues and opportunities facing the regions diverse transportation industry. Business owners and company leaders in sector affiliated organizations are provided a forum to network and discuss matters that are most important to their organizations ongoing success.

We were referred to TBBJ's website when we asked TBBJ who was on their panel of "experts".

The featured speaker at their event is Joe Lopano, CEO of Tampa International Airport. While Lopano is a leader, the airport is not our transportation problem. The problem is getting to the airport in time for your flight.

TBBJ's transportation industry panel included the following:
Christina Barker is no transportation industry expert. She was a former aide to Mayor Buckhorn who is one of the biggest cheerleaders for costly rail in Tampa Bay. With her masters degree in political campaigning, Barker was conveniently hired away by Billionaire Jeff Vinik two weeks prior to when the transit tax hike petition drive funded by Vinik began June 15th.

Barker's political campaign "success" includes working on the campaign of the overwhelmingly defeated (62-38%) Greenlight Pinellas in 2014.

Jeff Vinik is not in the transportation business or industry and is not a transportation expert. All for Transportation is a political committee with Vinik as it's largest donor pushing the rail tax.

Vinik and his wealthy allies are bankrolling the 30 year $16 Billion rail tax hike. They are publicly fronting their tax hike with transit advocate millennials who are their campaign workers not transportation experts.

When TBBJ was asked if NoTaxForTracks political committee could participate and have equal time at their event today, they were told they could not.

We expect to see an in-kind donation to All for Transportation from TBBJ in their campaign filing reports.

TBBJ politicized their own event by including the pro rail tax political committee All for Transportation and excluding the opposing side NoTaxForTracks. TBBJ confirms how billionaires buy access.

All For Transportation refuses is afraid to debate anyone who opposes their $16 Billion tax hike. They were asked to speak at the Tiger Bay club in Tampa and they had agreed to speak…. Until….

NoTaxForTracks.com has offered to debate All for Transportation anytime and anyplace.

All for Transportation does not even want to tell voters their transportation "plan" is a tax hike. Not one of their deceptive glossy mailers hitting voters mailboxes everyday says one thing about a tax hike.

Instead, the billionaires bankrolling All for Transportation bought off local media to cheerlead for the $16 Billion tax hike that will benefit them. "They" want to shut down debate.

"They" are the entitled ones.

And "they" are banking on ramming their $16 Billion tax hike thru before most voters ever know what's in it.
Posted by Sharon Calvert at 3:31 PM