SOS! Stop the CA BRT and Save Our Streets 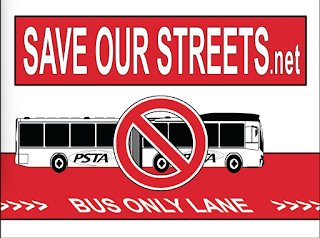 The SOS distress signal on PSTA is out.

PSTA ridership has declined 20% over the last 5 years. PSTA has been fiscally mismanaged for years and is currently bleeding its own reserves to keep operating.

But PSTA CEO Brad Miller, his staff and the governing PSTA Board have refused to responsibly address PSTA's failing financial position.

While PSTA is on its way to insolvency, PSTA is pursuing transit grants for a proposed $42 million Central Avenue BRT (CA BRT) that removes lanes of vehicle traffic and parking along its route for bus only lanes. This costly and unnecessary project duplicates existing routes and is a boondoggle and a bailout to financially distressed PSTA.

The CA BRT project has so many issues swirling around it including the fact that one end point - St. Pete Beach - never agreed to support or help fund this project. As residents and the general public get fully informed about this project and its negative impact on their community, fierce opposition is growing against it.

The St. Pete Beach commission workshop meeting Tuesday night was packed to capacity with residents who oppose this $42 million misnamed Central Avenue BRT that does not run along Central Avenue. It was standing room only in the council meeting room with the rest of the crowd watching a TV outside the room.
After watching the last two months of their meetings, the St. Pete Beach city commission has voiced their opposition to the proposed BRT.  They never agreed to support or fund it EVER and were quite upset that  PSTA told the Feds they were a funding partner.

PSTA apparently never told St. Pete Beach they submitted the CA BRT grant request to the FTA in 2017. This project is currently at 30% design complete and sitting in the FTA funding grant que. PSTA has publicly stated they anticipated getting their grant before the end of this year.

How could this project get this far along in the federal/state grant request process without one of its end points even knowing about it?

PSTA misled the Federal Transit Administration (FTA) in their $20.4 million federal transit grant request for the CA BRT that they submitted almost two years ago to the FTA. PSTA falsely told the FTA that St. Pete Beach planned to contribute $1.5 million to the project.

Nothing could be further from the truth.

This project began in December 2015 as a 10-14 mile project costing $16.5 million. PSTA ballooned the project into a $42 million (or more) 22 mile project running from downtown St. Petersburg to the Don Cesar on St. Pete Beach.

The public, including residents and businesses along the route, are just now finding out about the CA BRT project and its negative impact to them. This project uses road diets to REMOVE 13 miles of vehicle traffic lanes as well as parking along its 22 mile corridor.

The CA BRT project will place transit stations directly in front of businesses along the route who have been in business there for decades, blocking their business signage and negatively impacting access to their businesses.

In addition, PSTA planned to put huge buses on narrow, congested Gulf Blvd that has no bus bays. The right side of PSTA's Trolley currently runs on narrow Gulf Blvd rides in the bike lane. Yet PSTA wanted to put 60 foot busses on Gulf Blvd. PSTA wanted to put a total of 7 buses an hour going up and down Gulf Blvd - making it more dangerous and hazardous for everyone.

PSTA obviously neglected to properly inform the public, or St. Pete Beach, exactly what this project is doing or that large crowd would not have shown up at Tuesday's St. Pete Beach city commission meeting.

The South Pasadena city council has already passed a Resolution opposing the CA BRT.  Condo associations along the route have also passed Resolutions opposing this project.

Residents and businesses along the proposed CA BRT route on 1st Avenue North and South in St. Petersburg are placing formal opposition group Save Our Streets signs opposing this project on their property. 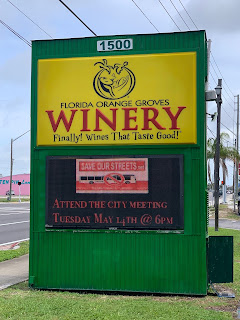 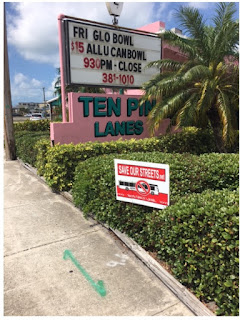 PSTA recently told the city of St. Pete Beach that they no longer expected the $1.5 million from them. But why did PSTA ever expect funding from St. Pete Beach? Why did they lie to the Feds?

This funding gap issue was brought to the attention of the PSTA Board last year at their 4/25/2018 Board meeting.

In the video of the 4/25/2018 PSTA meeting, go to 33:30 to watch a public comment that raises numerous issues about the CA BRT, including the false information PSTA submitted to the FTA in 2017 that St. Pete Beach was a funding partner and the projects funding gap.

We wrote about this issue and big mess last year here and here. 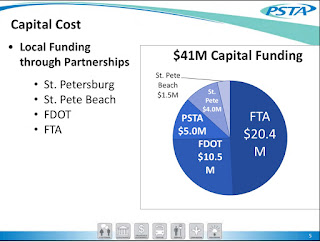 PSTA falsely infers St. Pete Beach was a committed funding partner. Nowhere did PSTA ever indicate that some of the funding was wishful thinking and was not committed.

As recently as a PSTA public meeting held in February this year about the CA BRT, PSTA continued to reflect St. Pete Beach as a funding partner.

PSTA refused to address these issues when they were raised to the Board last April and PSTA kept the city of St. Pete Beach CA BRT funding in their budget.

PSTA continued to perpetuate the false information for over a year until St. Pete Beach commission finally told PSTA recently to stop and desist stating they were funding or supporting this project.

And PSTA has a history of deception because they got caught misusing federal transit security funds on their proposed Greenlight Pinellas rail tax campaign in 2014. PSTA was forced to hand back $300K to the feds after they got caught.

PSTA has no money to spare but are now angling to dip into their reserves even more to cover the $1.5 million they told the FTA and the world St. Pete Beach was funding. But funding this project will deplete their reserves within three years.

It is irresponsible for the FTA or FDOT to hand any transit grant tax dollars to a failing transit agency who misled them in their grant request and misled the public for years.

Opposition to the CA BRT project is growing.

PSTA has pushed this project through an extremely flawed process using misleading information, misinformation and deception.

And PSTA continues refusing to address its failing financial position.

The SOS distress signal about the CA BRT big mess is now out.

Time to put the brakes on PSTA.

Save Our Streets!
Posted by Sharon Calvert at 11:13 AM