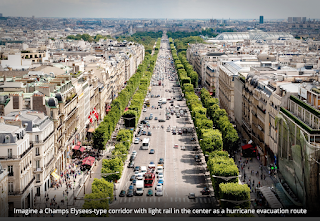 Hillsborough County’s Metropolitan Planning Organization has concocted an impractical transit scheme that involves tearing down 10 miles of Interstate-275 in favor of a boulevard concept, a plan ranked last by a survey of Tampa Bay citizens.
The unfathomable concept attempts to shoehorn a cumbersome light rail system onto an already congested area of Tampa and replace a roadway that is part of the U.S. interstate highway system.

The City of Tampa-centric proposal also defies the MPO’s own pronouncement that I-275, along with Interstate-4 and Interstate-75, is the most important transportation infrastructure to be protected from storm vulnerability. It is a major hurricane evacuation route for Tampa and Pinellas counties.

The concept envisions a grand corridor, a la the Champs-Elysees, with six to eight lanes of traffic, a two-way light trail system in the middle, and elaborate landscaping with sidewalks on the edges.

A light rail system would not only be useless in a hurricane but an impediment to evacuation as well.

At the MPO’s last board meeting it voted unanimously to finance a study of this grand corridor beginning immediately north of Tampa at the intersection of I-4. The county MPO asserted the study was requested by the citizens, but it was its own advisory committee that made the request. Most committee members oppose any improvement to I-275 and have actively campaigned against any plan from the Florida Department of Transportation.

The interstate teardown was included as one of three scenarios in the MPO’s long range transportation planning. It was chosen last by public responses and was soundly rejected in a three-county survey and for good reason.

In addition to being a vital evacuation route, I-275 is the major regional economic engine in Tampa Bay. The highway is expected to carry in excess of 250,000 cars per day in 2045 with more than half the vehicles entering from the northern most interchange in Hillsborough County and from Pasco County. Those surveyed in Pasco and Pinellas ranked the boulevard as very low, as did Hillsborough residents outside of Tampa.

Despite this, the county commissioners and Tampa city officials said they did not believe the scenario ranking numbers. FDOT Secretary David Gwynn has attempted to explain the difficulties such a plan would entail and its costs, but it fell on deaf ears. This is an idea strictly engineered by the City of Tampa that adversely effects the entire region.

Improvements to I-275 planned by FDOT will markedly decrease congestion, increase safety, decrease injuries and fatalities, and increase the area’s economic performance over the 25-year life of the road. The MPO has already planned a “road to nowhere” (East-West Road), but is now encouraging a small group of citizens, at the risk and expense of the entire region, to clamor for an idea that is foolhardy at best and lethal at worst.

Posted by Sharon Calvert at 5:49 PM