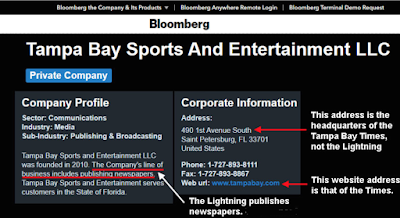 The Florida Department of State has notified Jeff Vinik that his corporation, Tampa Bay Sports and Entertainment LLC, may be in non-compliance with state statutes and, therefore, subject to fines.

The company has been doing business in Florida since 2010 but never registered as a foreign corporation. By not registering, Tampa Bay Sports and Entertainment has been able to shield its officers and directors from public scrutiny.

When the National Hockey League announced the sale of the Tampa Bay Lightning on February 5th, 2010, TBSE was mentioned by name as the new owner.

In addition to the Lightning, former hedge fund manager Vinik has been developing downtown Tampa’s Water Street since 2013 and is a major investor in the Tampa Bay Times.

Incorporating in Delaware instead of Florida makes TBSE a “foreign corporation” under Florida law. Florida Statute 607.1501 states that “a foreign corporation may not transact business in this state until it obtains a certificate of authority from the Department of State.”

TBSE is registered in Delaware and a letter from the Department of State was sent to Vinik at a Wilmington, DE address. A copy of the letter, provided by Tom Rask of the Tampa Bay Guardian, is below.

If Vinik acknowledges that TBSE has been conducting business in Florida for nine years, he must complete paperwork and pay filing fees and fines. If he maintains that the corporation has not conducted business in Florida, he must sign an affidavit making that claim.

Had TBSE registered as a foreign corporation in Florida, it would have had to fill out this form disclosing all its officers and all directors. It would also have had to disclose its street address, something which Delaware does not require.

Christina Barker, a paid representative of Vinik, refused to comment on this story. Barker asserts articles critical of Vinik are inaccurate but she was unable to give any examples supporting her claim to Tampa Bay Beat.