We continue our "Sunlight" series about All for Transportation's legally flawed $16 Billion transit tax and the insiders who were helping them.

We posted here about the genesis of the All for Transportation (AFT) transit tax. Transit advocate and community organizer Kevin Thurman created his "People's Plan" and shopped his transit tax political strategy to inside power players.


Scherberger is VP of Communications at Tampa International Airport (TIA) and works for TIA CEO Joe Lopano. She was formerly known as Janet Zink who was a reporter for the Tampa Bay Times. Scherberger is one-half of a local inside power player team. Her husband Tom Scherberger, also a former Times reporter, is Director of Communications for the Clerk of the Court Pat Frank. Frank is now a Defendant in the AFT lawsuits.
Thurman and Scherberger were communicating about his transit tax proposal via Scherberger's airport authority email address. Scherberger edited Thurman's People's Plan presentation and sent an edited version back to Thurman from her official airport authority email address.

In email thread of April 25, 2018 between Scherberger and Lopano's Executive Assistant Lisa Asseta, Scherberger referred to Thurman as a "transportation activist and the husband of Jeff Vinik’s VP of Communications.

Scherberger tempered her "activist" description of Thurman in the one-pager she created for Thurman's meeting with Lopano. She did make sure Lopano, et al knew Thurman was married to Jeff Vinik employee Ali Glisson who formerly worked for Mayor Buckhorn.
The meeting between TIA CEO Joe Lopano and transit advocate activist Kevin Thurman was held 5/1/2018. TIA's legal counsel Michael Stephens and TIA's Executive VP of Marketing and Communications Christopher Minner were also invited.

According to text messages the very next day on 5/2/2018, Scherberger and Thurman were updating Thurman's transit tax presentation. Communication between them confirms TIA legal counsel Michael Stephens was providing his input to Thurman's transit tax petition strategy. Perhaps Lopano did too at the meeting.

Little more than a month later on June 8, 2018, the nonprofit Keep Hillsborough Moving, Inc. was registered with the State of Florida but listed no Officers.

On June 11, 2018, the All for Transportation political committee (AFT PAC) was registered with the Hillsborough County Supervisor of Elections office. AFT named the nonprofit Keep Hillsborough Moving, Inc. as their affiliated organization.

The Officers of the AFT PAC included: Tyler Hudson, an attorney, as Chair, Robert Watkins, Chair of the Hillsborough County Aviation Authority, as Deputy Treasurer and Nancy Watkins, Robert's wife, as Treasurer.

At 11am on June 15, 2018, the very day All for Transportation launched their transit tax petition drive, Scherberger contacted Hudson about TIA working with AFT. Scherberger wanted to set up an in-depth briefing between TIA CEO Lopano and AFT Chair Hudson.
On June 22, 2018, the meeting titled "Transit Referendum" was held with Lopano and Hudson. 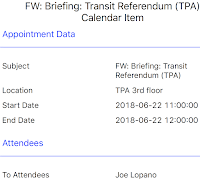 Lopano got his in-depth briefing with AFT. However, he either ignored or did not read Florida Statute 212.055 which is referred to numerous times in AFT's 5 page transit tax charter amendment. That Statute clearly states the spending authority of the local transportation sales tax proceeds is with the county commission not a political committee or mob rule.

Two of the three Officers of AFT's nonprofit Keep Hillsborough Moving are directly associated with TIA and legally connected to the AFT PAC.

Scherberger works for Lopano as his Communications executive and she brought all her contacts from her media background. With all the pro-AFT transit tax media coverage last year, we can reasonably assume she kept her former media colleagues and contacts, including those at her former employer the Tampa Bay Times, informed from inside the AFT campaign.

Watkins is the Chair of the Hillsborough County Aviation Authority (HCCA), the governing board of TIA who hired Lopano.
HCCA hired Lopano in 2011 at a salary of $250K and his salary has almost doubled in 7 years. According to this Times article last September during the AFT tax hike campaign, the HCCA Board gave Lopano a 5 percent raise to $475,542 PLUS a bonus opportunity up to $150K.

With Scherberger and Watkins association with AFT, we can reasonably assume that Lopano was all in with his support of the $16 Billion tax. Of course, a regressive 14% sales tax increase that burdens the low income and lower-middle income the most does not impact one who has a half million dollar salary.

Janet Scherberger sits in for Lopano as a voting member of the MPO Board when Lopano cannot make those meetings  - as she did at the October 30, 2018 MPO Board meeting right before the November election. 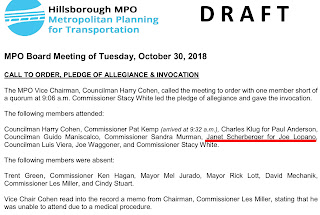 AFT included a specific spending mandate that 1 percent (at least $160 million over 30 years) must go to the Hillsborough MPO. This massive handout to the MPO central planning bureaucrats is a boondoggle since the MPO stated in 2015 they only needed $16 million over 20 years to do their mandated transportation planning.

There is obviously a very cozy relationship between the AFT political committee and TIA power players who sit on the Hillsborough MPO Board. The MPO Board never authorized Alden to make her AFT transit tax presentation but they did nothing about it when she did.

Scherberger, legally connected to AFT, was actively advocating for AFT's $16 Billion transit tax last year that mandated gobs of taxpayer dollars go to the very MPO Board she was sitting on.

Is that ethical? At the least, the appearance is bad, it certainly looks like a conflict of interest and does not pass a smell test.

Perhaps Scherberger should no longer sit in for Lopano at MPO Board meetings.

Robert Watkins term on the Hillsborough Aviation Authority expired on June 30, 2019. Watkins decision to closely associate himself with AFT who put a legally flawed massive transit tax on the ballot was bad judgment.

Watkins remains associated with AFT and perhaps he should not be reappointed by Governor DeSantis - if he reapplied.

Circuit Court Judge Rex Barbas threw out most of the All for Transportation transit tax as illegal and unlawful, including all of AFT's pre-determined spending mandates. Barbas somehow left the tax itself standing and there are two appeals filed to the Florida Supreme Court on the lower court ruling.

There is a possibility that the All for Transportation transit tax may end up being catastrophically flawed and entirely thrown out.

We expect decision makers in the public arena to protect the public and not help create big legal messes. They should not be helping an agenda driven Political Committee subject voters to a legally flawed transit tax referendum - especially on the public's time and dime.

According to Websters, foolish means "showing a lack of good sense, judgment, or discretion".

By supporting a massive transit tax that was never legally vetted, these power players now look foolish.
Posted by Sharon Calvert at 8:33 AM