Dr. Jim Davison and Sharon Calvert contributed to this post.

The bait-and-switch technique is an old and well-known tool in retail and politics. It is one of the most infuriating situations to be in and it is happening in Hillsborough County.

Critics of the All for Transportation (AFT) 30 year $16 Billion transit sales tax voiced their concern over the possibility of such bait and switch occurring if the tax passed.

The public was baited last year by All for Transportation's exaggerated promises of less congestion, getting home earlier from work and road improvements. AFT claimed their $16 Billion tax hike was the only transportation funding plan in the county. That was not true.

In 2016, the Hillsborough County commission passed a 10-year Transportation Policy to begin addressing the transportation issues of congestion, safety, capacity and maintenance.

This policy required a "portion of the increment of growth in ad valorem and existing local government state half-cent sales tax revenues over a 2015 base year to transportation needs." The policy began as a $600 million plan "with the ability for the BOCC to commit additional funds".

On March 1, 2017, the BOCC updated their 10 Year Transportation policy and approved an $812 million transportation plan that included funding much needed road widening projects.

According to this March 1, 2017 Times article, countywide commissioner Pat Kemp who had just been elected in 2016, was the lone NO vote.

Kemp claimed the $812 million plan (that funded specific projects and was created by the County and the Public Works Department in the Sunshine) was a big pot of money done with little planning. Ironically, she supported the $16 Billion AFT transit tax that was crafted in the dark by transit advocates, funded no known transportation plan and had no specific projects.

The existing $812 million plan was reviewed at the April 9, 2019 Transportation Workshop.
Below are funding sources of that plan that uses growth of existing revenues including existing property taxes, existing gas taxes and the Community Investment Tax (CIT) and no new taxes.

The $812M was not to contain any old revenues but use new revenues above the “base year” 2015. New gas taxes, if ever passed, could not be included in the plan but could supplement it.

The revenue estimates were made and where the money was going was delineated. The streets to be widened, intersections to be improved and roads to be paved were determined for the ten-year duration of the policy.

The existing 10 year $812 million transportation policy reviewed at the April Transportation workshop includes $408 million for new road capacity, $221 million for maintenance and $183 million for safety and intersection improvements.
Also presented was a 10 year view of comparing what the $812 million transportation plan and 10 years of AFT mandated spending allocations could fund. This chart confirms the 30 year $16 Billion tax provided ZERO dedicated funds for new road capacity.
Of the expected $1.2 Billion the county expects to receive over 10 years from the AFT transit tax, there is a "Remaining" bucket of $177 million that could be used for any funding category including new road capacity. That is less than $18 million a year which could fund less than a mile of new roads a year. As we posted here, that is why Commissioner Murman said in February the AFT transit tax puts the county between a "rock and a hard place".

The existing 10 year transportation policy has been followed for the last three years, despite some members of the commission board trying to make changes as to where the money should be spent.

Then came the All for Transportation (AFT) $16 Billion sales tax hike referendum.

Opponents of the AFT tax warned that the money from the sales tax would be used to get rid of the 10-year $812 million transportation plan.

Backers of the tax said there was nothing to fear.

But AFT never mentioned the the $812M plan that funds new roads during the campaign. Their marketing mantras was their $16 Billion tax was the only way to fix roads in Hillsborough County.

Conveniently after the election according to this November 18, 2018 Times article, All For Transportation spokesperson Brian Willis said "it was always intended to be an additional resource, not the sole resource." 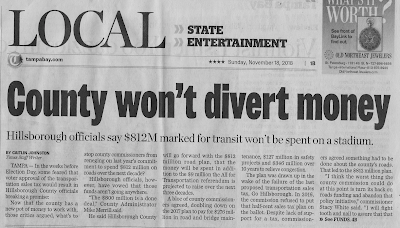 County Administrator Mike Merrill and several BOCC members such as Commissioners Overman, White and Miller were quoted in that Times article that the 10-year plan was a promise and should remain.

'The $800 million is a done deal,' County Administrator Mike Merrill said. He said Hillsborough County will go forward with the $812 million road plan...

'I think the worst thing the county commission could do at this point is turn its back on roads funding and abandon that policy initiative,' commissioner Stacy White said. 'I will fight tooth and nail to assure that that funding remains in place.'

'We already made that commitment,' Overman said of the roads plan. 'We should make sure that happens.'

Three commissioners - Les Miller, Overman and White said the tax money should be spent in addition to the county's [AFT tax] money, not instead of.

Countywide commissioner Mariella Smith, who had just been elected, stated the county could not afford the $812 million plan but she gave no evidence to support her claim. She also stated the county must find a way to fund road widening the AFT tax did not cover. Smith, who supported the AFT transit tax, apparently knew the tax did not fund new roads. She did not mention that during her campaign or the need to raise other taxes to fund road widening.

The 10 year policy has met all revenue estimates for the past 3 years and over $400 million dollars was included for future road widening/capacity improvements. The plan was still intact as recently as this past April, but county administration was already preparing for its demise.

Overman, Kemp, Miller and Smith never mentioned last year before the referendum they felt the sales tax would and should replace the $812 million 10 year policy. It appears Miller and Overman have since changed their minds about keeping the $812 million transportation funding plan.

With the AFT transit tax as bait, the switch began at the April 2019 Transportation workshop. Lucia Garsys, who works for Merrill, began speaking of switching projects currently funded by the $812 million transportation funding to instead be funded with the [AFT] surtax money.

County Administrator Mike Merrill sprung the trap, or switch, at the last BOCC meeting on July 17, 2019.

In Agenda Item G-1 deceptively titled "Receive a report from the Engineering and Operations Department regarding the Transportation Program 10 Year Plan", Merrill presented a new 10-year transportation plan of $1.5 Billion that includes the $1.2 Billion of AFT transit tax proceeds.

With a new $16 Billion tax, Merrill's proposed new policy has only $267 million for road widening. But that is only if the entire “remaining category” of funds from the AFT sales tax, $177 million, are spent on new road capacity.

This leaves almost $600 million in needed road widening and capacity projects that will not be scheduled over the next 10 years. It will affect every corner of the county and increase the hours people are stuck in congestion by an estimated 8 million passenger hours per year.

Merrill's 10 year proposal not only whacks funding for new road capacity but he hands the Hillsborough MPO central planners a funding and spending boondoggle. Merrill hands $50 million to the MPO when the MPO stated in 2015 they only needed $16 million over 20 years to do their planning.

Those who want their roads widened and improved should be outraged at such absurdity and wasteful spending.

The AFT $16 Billion sales tax drastically reduces mobility fees paid by developers to fund transportation needs from new growth in unincorporated Hillsborough. With the county currently re-analyzing the negative revenue impact of the AFT tax on mobility fees, it is unclear how Merrill included mobility fees in his new funding proposal.

The MPO consultants calculated about a 50% decrease in mobility fee revenues as a result of the AFT tax. The revenue shortfall will fall on taxpayers. So much for developers paying "their fair share".

Residents in growing South Hillsborough County get a double whammy. These residents lose 50% of their mobility fees and all of the CIT/Ad valorem property tax revenues that were allotted for road capacity projects.

There is still uncertainty with the $16 Billion AFT transit tax. Circuit Court Judge Barbas threw out all of All for Transportation's mandated spending allocations as illegal and unlawful but left the tax itself standing. Barbas somehow claims voters simply voted for a transportation tax and that's it. But that does not represent the historical precedence of sales tax referendums in Florida.

There may still be defects to fix and there are two appeals that have been filed to the Florida Supreme Court appealing Barbas's ruling.

But this BOCC board, with four votes from Miller, Overman, Kemp and Smith, began the process of finalizing the AFT sales tax spending categories. Disregarding the uncertainty and the reality the legal issues are not all resolved, these four county commissioners voted to reward the AFT big mess makers by pursuing reinstating AFT's unfair and unbalanced spending allocations.

And the funding switch shell game has been activated.

The 2016 transportation funding policy states "Any deviation or amendment to this policy shall require a supermajority vote of the BOCC."

It appears it will take five votes to throw out the 2016 transportation policy as Merrill wants to do. For the BOCC to vote on such action, it must be properly publicly noticed to allow the  public an opportunity to weigh in.

Now the county administrator is pursuing shafting them more by throwing out the $812 million plan that funded their much needed new road capacity.

Did voters know about the 10 year $812 million transportation plan that funded transportation without new or higher taxes when they voted last year? We doubt most did.

We wonder how voters who voted for the AFT transit tax, especially those who live in unincorporated Hillsborough, now feel about their vote?

And how will voters in Hillsborough County feel about being the victims of a bait-and-switch.
Posted by Sharon Calvert at 12:18 PM