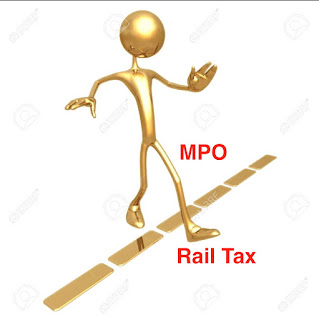 On August 27th we asked Hillsborough MPO Director Beth Alden if the massive 30 year 14% transit tax hike was funding the MPO's 2040 long range transportation plan (LRTP). That claim was reported numerous times by local media. Alden seemed flustered with the question and tried to respond that she had not taken much time looking at the transit tax hike petition.

However, after more questions were asked, Alden admitted she had spoken to two All for Transportation (AFT) PAC activists and spokespersons. Alden spoke to Kevin Thurman and Christina Barker when the petition drive began in mid June and they also met on July 2nd. Alden indicated she met with Thurman and Barker the same day she said Thurman and Barker were meeting with county commissioners. **

There is no record in the county lobbyist registry of Thurman or Barker meeting with county commissioners at County Center so they met with commissioners under the radar elsewhere.

Alden is quoted in a Times article of June 15 about the transit tax hike funding the outdated long range transportation plan from 4 years ago. When contacted, the Times reporter said it was someone from both the MPO and AFT PAC who told him the tax hike was funding the MPO's 2040 LRTP.
Obviously, it was Alden from the MPO.

Later during the week of August 27, we found out Alden had presented at the August 23 Tampa City Council meeting. The agenda item for that meeting states Alden would be presenting what would be funded in the transit tax ballot initiative.
Alden's feigned ignorance on August 27 that she had not taken the time to know what was in the transit tax was not true. She had presented on August 23rd about the tax hike.

That statement is astounding and raises a big question. Was taxpayer funded MPO Staff involved in this tax hike effort? Did MPO staff collaborate to any extent with the transit advocates who wrote the charter amendment five pages of fine print?

Are there ethical issues with the Director of the MPO, who is paid by taxpayers, being the "go to" person to tout what the AFT transit tax hike is funding?

Alden's presentation to the Tampa City Council on 8/23/2018 can be found here. At that public meeting, Alden merged information from the 2040 LRTP with the transit tax hike - as if they are one and the same. The name of Alden's presentation is titled "2040 Plan and All for Trans".

There are problems with Alden's August 23rd presentation. She presented misleading and wrong information.

Alden states that new roads and adding new road capacity on existing roads (except for intersection improvements) may be eligible under Any/Other  and Bike/Ped".

There is no Any/Other funding category in the charter amendment language or the MPO's 2040 plan. Alden made that up.

Use of the word "and" is important because that requires all criteria listed be met. The charter amendment tax hike provides no dedicated funding for new road capacity, it only specifically prohibits and limits new roads.

The "Remaining" funding category of the Transit Restricted portion is 20%. That is what is left after the other 80% of the transit funding is spent on the mandated transit and train projects. None of the remaining funds in the transit restricted portion can be used for roads. It must be used for transit - another slush fund to cover rail projects cost overruns.

Alden knows new road funding is excluded in the AFT transit tax hike. Her organization wrote the MPO plan that does include funding new road capacity. She was specifically engaged with the AFT transit activists who wrote the language.

Alden did not want to say there's no new road funding in AFT's tax hike so she carefully couched her wording. She covered herself by stating new road capacity "may be eligible" which also means new roads may not be eligible" to have it both ways.

None of the regulations in the 5 pages of the AFT tax hike charter amendment are in the MPO plan. Alden knows that too. The MPO plan uses dollars and has specific projects with associated costs.  Alden's presentation creates a false impression that the MPO plan and the AFT rail tax hike are one and the same.

Alden is also wrong about being able to reallocate bike/pedestrian funding which is massively overfunded in the AFT tax hike.

Reallocation of any funding is only allowable in the General Purpose funding categories for maintenance, intersection improvements and safety (sections 11.07(1), (2) and (3). And then it requires a 75% super super majority to reallocate any of those funds.

The tax hike language specifically prohibits reallocating any funds dedicated to bike paths/sidewalks (Section 11.07(4).
No reallocation of any funds in the Transit Restriction portion is allowed. None of the $7-8 Billion MANDATED to be spent on transit and city of Tampa rail projects can be reallocated to anything else - for 30 years. It would require passing another charter amendment to repeal this tax or change it. Alden conspicuously left out that information

Alden misrepresented the proportion of the total tax that will be spent in the city of Tampa.

AFT's rail tax will fully fund the three of the four rail corridors (exception is the Streetcar) listed in the MPO plan. The MPO plan states the three Tampa rail corridors will be financed 100% by a one percent sales tax hike - which will be paid for mostly by taxpayers in unincorporated Hillsborough.

Alden ignored the rail/transit funding in the MPO plan that would be spent in Tampa. If she did, everyone would know AFT's transit tax is a Rail tax. Alden knows "rail" is a four letter word that has become toxic in Tampa Bay.

AFT does not want the word rail mentioned and Alden complied. AFT has spent millions and millions on expensive misleading glossy mailers covering for their rail tax.

Alden is a known transit enthusiast. She has the audacity to include proposing tearing down 10 miles of I-275 from downtown to Bearss Avenue in the MPO's current 2045 planning process.

Big problem is Alden was not truthful in her August 23 presentation. Alden is a taxpayer funded bureaucrat who does not represent AFT.  She should not have taken it upon herself to act as one.

The MPO Board must address this issue because Alden works for them. MPO staff cannot be misinforming or misleading the public or anyone else about what AFT's 30 year $16 Billion tax hike is funding.

The MPO must clearly distance themselves from AFT and their tax hike.

The credibility of the Hillsborough MPO will continue spiraling downward unless the MPO Board takes actions to reign in its own bureaucracy.