On January 24, 2019, the BOCC unanimously approved 7-0 the County's Final report about the proposed Tampa Electric (TECO) Big Bend natural gas plant. TECO planned to cut its use of coal in half transitioning to this plant. The approval decision would ultimately be made by Governor DeSantis and his Cabinet members. 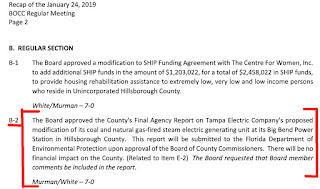 The Sierra Club who support the $93 TRILLION Green New Deal and oppose fossil fuels, did not like that vote. Pat Kemp sits on the Executive Committee of the Sierra Club of Tampa Bay, Mariella Smith is a long time leader of the Sierra Club of Tampa Bay and the Sierra Club endorsed Kemp, Smith and Overman.
After the January 2019 commission vote, the Sierra Club began pressuring Kemp, Smith and Overman to oppose TECO's natural gas plant. Kemp, Overman and Smith are all members of the Tampa Bay Anti-Car Brigade who want to tear down 10 miles of I-275, force us out of the safety and security of our individual vehicles and want massive tax hikes for transit and rail boondoggles.
Thru Public Records Requests, Sierra Club members, including their leaders Kent Bailey and Gonzalo Valdes, were emailing the Commissioners to reject the TECO natural gas plant AFTER the commission had already voted their approval.
The Sierra Club launched a campaign against the natural gas plant. At a hearing held in March 2019 after they had voted in January to approve, Commissioners Kemp and Smith spoke in opposition at the hearing. At a Sierra Club rally before that hearing Kemp stated:

"We are not going to let (Tampa Electric) go forward with this fracked gas plan," Hillsborough County Commissioner Pat Kemp said at a rally organized by the Sierra Club before the public comment portion. "It does not make any sense in this day and age for them to do that."

Subsequently, a letter was collectively drafted by Kemp and signed by commissioners Kemp, Overman and Smith requesting Governor DeSantis and his Cabinet reject TECO's plan to build the Big Bend natural gas plant. Below is a copy of their letter dated July 24, 2019. Note that the letter signed by Kemp, Overman and Smith is on official Hillsborough County Commission letterhead that includes all the commissioner's names, the county administrator, the county attorney and the county internal auditor. 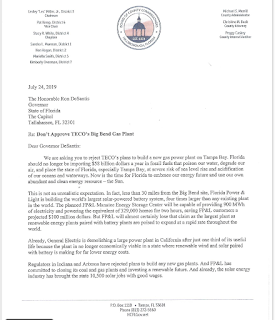 The above letter was sent to Governor DeSantis, CFO Jimmy Patronis, Attorney General Ashley Moody and Agriculture Commissioner Nikki Fried. We have copies of each individual letter sent to them signed by Kemp, Overman and Smith.
Commissioner Kemp widely distributed the letters to local media, including the Tampa Bay Times, the Sierra Club and others.
For three county commissioners to sign the same letter, they had to collaborate and coordinate their action. But their collaboration was done in the dark with no transparency. From a public record request we received, Kemp sent a draft of the letter dated 7/23/2019 to her aide. It can be reasonably assumed that the commissioners used their aides to coordinate behind closed doors the drafting and signing of the letter.
Commissioner Smith sent this text message to her aide instructing her to ensure Gonzalo Valdes, a leader with the Florida Sierra Club, has "our letter re: TECO from Pat, Kim & me." This confirms the letter was their collective action. But their action was done outside Sunshine.
There was already a 2017 BOCC Board policy regarding the use of official county commission logo and letterhead for communication and news releases needed Board approval. Apparently, not one of the three asked about whether they can collectively sign a letter using the official county commission letterhead. That displays bad judgment.

On July 25, 2019 Gov. DeSantis and all his Cabinet members except Democrat Nikki Fried approved TECO's Big Bend natural gas plant. While the Tampa Bay Times reported that Kemp, Overman and Smith sent letters to the Governor and Cabinet requesting they reject the proposal, the Times failed to report that it was one letter signed by all three Democrat County commissioners on official county commission letterhead…that required the collective collaboration of all three commissioners.
The county commissioners had already voted their unanimous approval of TECO's plan but Kemp told the Times the issue was "far from over".  Kemp stated she planned to bring it up again for discussion and a potential resolution at the County Commission and this was the beginning of "widespread opposition" in this area.
We are not sure of the board policy or legal ramifications of Kemp trying to bring up the issue that had previously been unanimously voted on. However, there sure seems to be an issue with Kemp stating she would bring up the issue again after she collaborated with Overman and Smith in the dark so she already knew their position.
At the next commission meeting after the TECO plant was approved by DeSantis and the Cabinet, Kemp, Overman and Smith's inappropriate actions were brought up. However, their actions were only brought up regarding the three commissioners signing a letter using the official county commission letterhead. It appears the Democrat majority commission danced around the fact that the three commissioners collaborated outside Sunshine and there was no mention of what appears to be a Sunshine Law violation.
At that August 7, 2019 commission meeting, the commissioners passed another policy that no commissioner or commissioners can use the official county commission letterhead on any subject or issue unless the Board has taken official action on the subject or issue. This was basically a hand slapping on Kemp, Overman, and Smith. 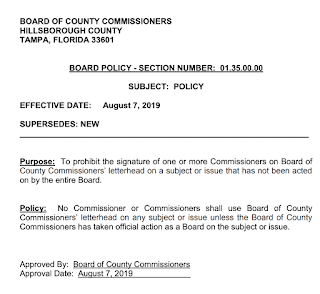 There is no excuse for the actions of Kemp, Overman and Smith orchestrating a collaborated position on an issue outside Sunshine, especially an issue that was already voted on by them.
Commissioners Kemp and Smith have been leaders of the Sierra Club and friends for many years. The Tampa Bay Times recently reported about another potential Sunshine Law violation by them. Kemp and Smith were caught inviting select people to attend a virtual roundtable on south county development. Of course that is a subject that comes up before the Board.
The Sierra Club is also a member of the Tampa Bay Anti-Car Brigade and apparently has great influence with Kemp, Overman and Smith. They all supported the legally challenged All for Transportation $16 Billion transit tax that we are still awaiting the Florida Supreme Court ruling whether it will be thrown out or not.
And Kemp, Overman and Smith kept pursuing trying to put another massive All for Transportation 2.0 transit tax on the November ballot after the pandemic hit when so many were suffering and losing their jobs. Exploiting a crisis for another transit tax hike is appalling especially as the pandemic has destroyed germ spreading transit ridership.
It appears Kemp inappropriately collaborated in the dark with Overman and Smith regarding their actions related to the TECO Big Bend natural gas plant. In addition, we posted here that a formal complaint has been filed with the Florida Bar against Kemp. And according to this Florida Politics article, an Ethics Complaint has also been filed against Pat Kemp in addition to the Florida Bar complaint.

As an activist, Kemp uses social media to attack people.

Kemp was quick to post this on her Facebook page about Nick Sandmann before knowing any of the facts. Kemp owes an apology to Sandmann who has already successfully settled defamation lawsuits with CNN and the Washington Post. Kemp also owes many of her own constituents who support Trump an apology for such inflammatory rhetoric. 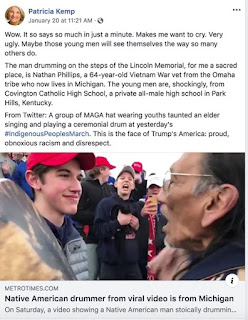 Kemp has even attacked the Democrat BOCC Chair Les Miller on Facebook who has had to deal with Kemp's unethical tactics. Miller and his wife crossed party lines to endorse Sandy Murman who is running against Kemp.

There is a pattern of unethical and distasteful behavior with Pat Kemp. Kemp gets agitated and rude even in public too often with those who do not agree with her "my way or the highway" attitude.

They can decide to remove activist commissioner Pat Kemp in County Commission District 6 on November 3rd.

Posted by Sharon Calvert at 1:05 PM