NoTaxForTracks (NTFT) issued a statement last week after the Florida Supreme Court threw out the unconstitutional and unlawful All for Transportation (AFT) transit tax hike in its entirety. NTFT requested that the AFT transit tax dollars illegally collected be given back to the residents of Hillsborough County.

About $502 Million has been collected since January 1, 2019. The Florida Supreme Court did not issue a remedy for disposition of those funds. Wednesday, the Hillsborough County Commission agreed with NTFT and voted 6-0 to refund the hundreds of millions of AFT dollars back to their constituents.

The commissioners did that because of what came next. Immediately after voting to refund the unlawfully taken AFT transit tax dollars, the county commissioners voted to start the process for putting AFT 2.0 on the 2022 ballot.

There is still a class action lawsuit in the lower Circuit Court that was set aside pending the Florida Supreme Court ruling that also requested the illegal AFT funds collected be refunded. That class action will probably determine the final remedy for dispersing the unlawfully taken AFT tax dollars.

We hope a remedy either refunds the money directly back to the residents of Hillsborough County or institutes a tax holiday reducing the county sales tax rate to 6.5% for a period of time until the AFT tax money that was collected is depleted. Taxpayers in Hillsborough county were victims of an illegal tax hike and money was unlawfully taken from them.

We have not seen any statement regarding a remedy from the other recipients of the unlawful AFT transit tax funds, the cities of Tampa, Temple Terrace and Plant City, and the MPO.

The transit agency HART, with anemic ridership devastated even more by the pandemic, appears to be looking for some way to keep their $253 million windfall HART never asked for. HART had to throw together a spending plan AFTER the tax passed. As we posted here,  HART planned to spend the AFT dollars, intended for new transit services, on their existing bus services, administrative expenses and pay raises.

While the AFT transit tax was in legal limbo, HART promised their union members pay raises, but only if the transit tax survived. What kind of agency does that?

AFT made no statement about remedying the huge problem they alone created. Instead, AFT's response was to blame Tallahassee for AFT's own incompetence or willful intentions for putting an unlawful transit tax referendum on the ballot.

AFT does not care about refunding the unlawfully taken AFT tax dollars because they have already launched their AFT 2.0 campaign. This time, it appears, they are directing the county commissioners to put their AFT transit/rail tax on the 2022 ballot.

The AFT plans were not developed by transportation engineers, planners, and financial professionals. Their "plans" were conceived over wine by transit activists and lawyers, who were either unfamiliar with or intentionally decided to disregard, Florida law.

How do we know AFT is pushing the same $16 BILLION massive sales tax hike for costly trains and transit? The "Swampy" HART Board.

Two leaders of the AFT political action committee were appointed to the transit agency HART Board last year. It became fairly apparent after the Florida Supreme Court hearing last year that the entire AFT transit tax was going to be thrown out. The AFT transit/rail cabal had to act.

In August 2020, AFT's Chair Tyler Hudson, a lawyer, was appointed to the HART Board by Tampa Mayor Jane Castor who also sits on the HART Board.

In October 2020, AFT spokesperson Rena Upshaw-Frazier, also a lawyer, was appointed to the HART Board by the Hillsborough County Commission. In 2016, Frazier ran for the Florida House District 59 seat and was overwhelmingly defeated 55-45 by then incumbent Ross Spano. Former County Commissioner Les Miller and new County Commissioner Gwen Myers supported Frazier in 2016.

Mayor Castor is a big supporter of the AFT transit tax because it forces taxpayers in unincorporated to fund costly rail projects in Tampa. The AFT transit tax overwhelmingly benefits the city of Tampa, wealthy downtown developers and Jeff Vinik. Vinik was the largest donor to AFT's unlawful transit tax hike campaign in 2018. Vinik was Castor's largest donor in 2019 when Castor won her mayor's race with only 17% of all Tampa registered voters voting for her in a low turnout municipal election.

In addition to Castor, the other crony swampy creatures on the HART Board who supported AFT's illegal transit tax in 2018 are: Hillsborough County Commissioners Pat Kemp, Kimberly Overman, Mariella Smith and Gwen Myers and City of Tampa councilman Luis Viera. They all want unincorporated Hillsborough taxpayers to pay for costly, outdated rail systems in the city of Tampa.

HART transit agency has been engulfed in scandals and controversy since the AFT transit tax passed. The new CEO Ben Limmer HART hired in February 2019 was suspended by November 2019 due to a scandal. He was fired or forced to resign in March 2020. The interim CEO who took over for Limmer in November 2019 unexpectedly resigned in September 2020.

HART has been running rudderless as members of the Board continue to display bad judgment. HART still need a CEO but what good CEO candidates wants to work for a transit agency in decline with a dysfunctional Board? Why would taxpayers want to hand billions of new tax dollars to a scandal ridden dysfunctional agency that cannot even hire a CEO?

AFT put a deceptive and unlawful transit tax on the ballot in 2018. AFT and those associated with AFT lied to the voting public in 2018. These same crony swamp creatures now run HART and will use the taxpayer funded HART Board to help launch and promote AFT 2.0. 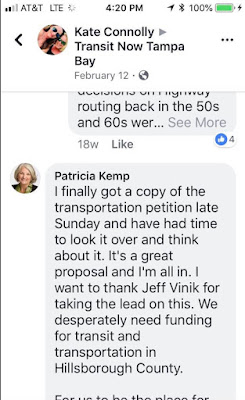 Kemp consistently touts publicly at the dais she is the only county commissioner who is a "lawyer". But Kemp the "lawyer" apparently did not read FS 212.055 referenced throughout AFT's illegal transit tax referendum. Kemp, the lawyer who does not understand Florida state law and applauds a transit tax benefitting wealthy cronies, is currently Chair of the Hillsborough County BOCC.

Commissioner Overman, is the HART Board member and countywide commissioner infamously known for calling her own constituents "super stupid". Overman, who is not a lawyer, was caught lying to the media in 2018 when she falsely stated "the [AFT] referendum language was vetted closely" but could not provide any evidence thereof. In 2019, Overman, who wants to tear down interstates and not fund new road capacity, irrationally stated you can achieve the goal of congestion reduction WITHOUT adding new new road capacity. Overman is not a traffic engineer and her statement is absurd....just ask those who live in New Tampa and South County.

Commissioner Smith, HART Board member and countywide commissioner, is a Sierra club activist who also does not want to fund new road capacity. Smith stated in 2019 that Hillsborough County voters did not want to fund new roads but voted to put massive amounts of new tax dollars ($7-8 Billion) to fund costly transit. Circuit Court Judge Rex Barbas rebutted that statement in his ruling but kudos to Smith for admitting AFT was a transit tax that did not fund new road capacity.

Smith, who is NOT a traffic engineer, also stated in 2019 the county focus should be on getting cars off the road instead of road widening. Smith statements were absurd then and more absurd now after the pandemic hit. People prefer the safety and security of their personal protection individual vehicles not germ/disease spreading mass transit.

NTFT and Commissioner White raised the warning flag in 2018 that AFT had potential legal issues. They were right.

County commissioners Kemp, Overman, Smith, Cohen and Myers, who supported the unlawful AFT transit tax, were wrong. It has cost Hillsborough County taxpayers untold hundreds of thousands of dollars in legal costs to right their wrong.

These same politicians now want a do over....