That is gaslighting rhetoric and NOT true. We're left wondering whether Kemp understands the County's budget, understands basic math or just prefers throwing tax dollars out the window.

Challenged about her statement, Kemp scurried away and refused to engage.

Kemp is a transit activist, a Sierra Club (who want to FORCE people out of their cars) activist and part of the anti-car brigade who want to tear down 10 miles of I-275 from downtown to Bearss Ave. Kemp spoke at Cafe Con Tampa last Friday.

The video of Kemp speaking at Cafe Con Tampa can be found on their FaceBook page here or click the videos on the FB page. Go to about 4:50 in her speech where Kemp begins speaking about the illegal All For Transportation Transit rail tax. Speakers at Cafe Con Tampa only speak about 15-20 minutes but Cafe Con Tampa cuts out from their video the entire Q & A with the speaker which is the vast majority of their meeting. Hmmm.....

Kemp is a lawyer who should know Florida law and was forewarned in 2018 about AFT's numerous legal issues. But she frames the unlawful AFT rail tax she supported as 57% voted for the illegal tax but it was that Florida Supreme Court who threw it out. Kemp failed to mention the lower court judge, Rex Barbas, threw out almost everything in the referendum except the rail tax itself. Barbas's lower court ruling stated voters just voted for $16B tax hike and they did not care where those dollars would be spent. His ruling was so illogical because that scenario has never occurred before EVER. No one should be surprised why the entire tax was thrown out as unlawful but somehow Kemp, a lawyer, was surprised.

Kemp ignores the fact that voters were lied to in 2018. All for Transportation Transit had to spend over $4 MILLION of crony special interests money lying to voters and falsely selling their rail tax was to fix roads. AFT refused to debate anyone who opposed them because their lies would not stand up to public scrutiny. AFT's crony donor base bought off local media who filtered out almost all information from anyone who opposed. Local media shamefully filtered out and ignored red flag warnings about AFT's legal issues from AFT's formal opposition NoTaxForTracks and from sitting Commissioner Stacy White. Kemp ignores that AFT had to stack up lies and coverups for their illegal rail tax to get it passed.

Kemp does not care or learn from her mistakes because she knows the wealthy AFT cronies, who benefit the most, will fund another rail tax boondoggle. While promoting AFT rail tax 2.0, Kemp clearly states at Cafe Con Tampa that the commission has the 4-5 commissioners (the transit activist anti-car brigade) needed to put another 30 year $16 BILLION rail tax on the ballot next year.

She makes such statement before any public meeting has been held on the issue. The County scheduled 4 so-called Transportation Townhall public meetings. Obviously, like the Go Hillsborough scandal, they are a joke. These meetings are not for the public to inform the commissioners or county staff. The commissioners and county staff are using these meetings for the Tampa Centric 5 to gaslight and lie to the public for what THEY want. 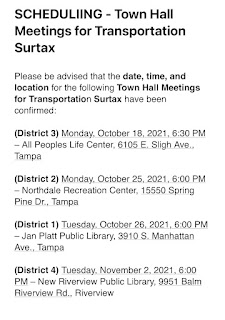 The Tampa Centric 5 (all Democrats) have already decided to put another massive unneeded and unnecessary tax hike on the 2022 ballot.....before one cent of the $512 MILLION illegally collected AFT rail tax has been refunded.

Residents and taxpayers of Hillsborough County should attend these meetings to demand their money back from the unlawful AFT rail tax, demand the county prioritize the existing budget to fund and fix our roads first using all AVAILABLE revenue sources and demand no tax hike to fund costly rail that few want to pay for or use.

HART transit agency has their own .5 millage property tax that is paid by all property owners in Hillsborough County EXCEPT those in Plant City. The vast majority of those who pay HART's property tax NEVER use HART. HART's property tax was NOT going away with the AFT rail tax, they were going to double dip with their property taxes and the rail tax. HART needs to live within the means of their existing revenue sources.

Hillsborough County's budget was not hit hard by the pandemic. A chart from the County as they go through their budget process for FY2022 reflect revenues are increasing over 2021. There is more "additional" funding going to "compensation costs" than transportation.

The financial impact statement on AFT's ballot summary language estimated the AFT rail tax would collect about $552 million over its 1st two years. The County collected at least $512 or perhaps up to $540 million over the 2 years it was unlawfully collected, including during the pandemic.
Where have the County's revenues - your tax dollars been going? 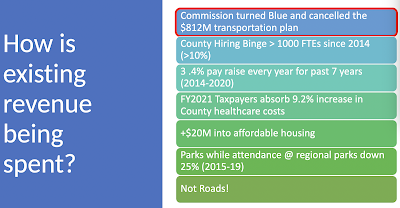 The Tampa Centric 5 eliminated the 10 year $812 MILLION funded transportation plan and went on a hiring binge. The County has been handing out annual raises unheard of in the private sector. The County is absorbing increasing healthcare costs, unheard of in the public sector, to shield county employees from increased healthcare costs everyone else must endure.
The private sector was forced to lay off employees due to the pandemic and economic destructive lockdowns and restrictions. We know of no layoffs of any taxpayer funded county employees that occurred as a result of the pandemic.
Population growth over the next 20 years in Hillsborough is estimated to run about 2% per year but the County Administrator's budget is increasing at an alarming annual rate of almost 13% per year. This is not just incompetence it is intentional incompetence.
Slush funds are created in the County Administrator's budget to fund commissioner's pet projects - not specified in the budget. Due to Sunshine laws, the commissioners haggle with the County Administrator behind the scenes for their pet projects. County staff can haggle behind the scenes between commissioners for support of each others pet projects. The vote by the commissioners supporting each others pet projects (many times spending boondoggles, paying off the donor class or trying to buy votes) is the end result....like money going out the window.

$25.2 MILLION was leftover from last year's budget - during the pandemic - $18.3 MILLION was left in the Countywide Fund and $6.9 MILLION was left in the Unincorporated Fund. The commissioners then select their own pet projects (called "flagged items") to spend those dollars and that is what they did at the July 29th Budget Reconciliation meeting.
So what did the commissioners spend the $25.2 MILLION leftover from last year? Below is the Flag list:
Here's some highlights of the spending:
Commissioner White is the ONLY commissioner who funded road improvements and he funded two of them for $1.5 MILLION.
Funding roads is NOT a priority of this commission.....well a number of them want to tear down roads....
Additionally, the Sheriff's office returned to the county $31 MILLION over the last couple of years. Where did those dollars go?
Hillsborough County has received over $540 MILLION of federal COVID relief funds over the last year. Included in the latest round of COVID relief funding earlier this year, Hillsborough County received $286 MILLION. The city of Tampa received $80 MILLION and according to this report, Tampa Mayor Jane Castor will use COVID relief funds for transit NOT fixing Tampa's hazardous pot holed, sinking roads...that buses must also use.
According to the County's COVID Recovery Plan for spending the $540 MILLION of federal COVID relief funds, the County hired a diversity consultant to develop an "equity" profile. The Democrat super majority commission want to use those hundreds of millions on "Equitable Outcome" initiatives.

...the resulting profile and data will be used to guide the design and implementation of an “equity lens” through which actions taken by the County are examined to assess and measure questions of equity. 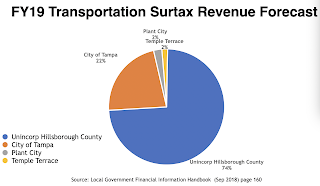 AFT was a 30 year $16B rail tax - ONLY reason for massive 30 year tax is to fund rail. The Hillsborough County Transportation Planning Organization (TPO) stated in their outdated long range 2045 plan that the $16B rail tax would FULLY fund the rail the transit activists are pursuing. The TPO's transportation plan has the County (mostly from unincorporated) paying the entire costs for ALL the proposed Tampa rail projects confirming AFT is a RAIL tax. This also makes for a strong connection that the taxpayer funded TPO collaborated with the AFT political PAC in drafting the AFT rail tax. That is why Beth Alden, Exec Director for the TPO, is gaslighting the public too....she wants the rail tax.
The same cronies who funded the AFT rail tax are the same cronies pushing to put taxpayers on the hook for a new baseball stadium in Tampa. It appears the Tampa Centric 5 are beholden to the downtown cronies.
Kemp is leading the charge to hold funding roads hostage for a $16 Billion rail tax boondoggle for costly rail that few will ever ride. A super super majority in Hillsborough County want our roads fixed and they do NOT want to pay for more transit.
The Tampa Centric 5 defunded and eliminated the 10 year $812 MILLION transportation plan begun in 2017. They are so [intentionally] incompetent and have created such a big mess that pot holes are big enough in Hillsborough County to plant and mulch Palm trees.
Hillsborough County does NOT have a Funding problem.
Hillsborough County has a Spending problem.
Four of the Tampa Centric 5 - Cohen, Overman, Smith and Myers - are up for re-election next year. The Town Hall meetings are just a ticky mark dog and pony show. They might as well be cancelled because the Tampa Centric 5 "know it alls" don't care what their constituents have to say because "they" know best.
If Hillsborough voters want their roads fixed and want to stop the attempts by the Tampa Centric 5 to use the County budget to turn Hillsborough County into Portland, Seattle or San Francisco, vote the 4 Democrats out and defeat the rail tax boondoggle they put on the ballot next year.

Leave gaslighting Kemp powerless to keep destroying the County budget, throwing money out the window and pursuing a rail tax ever again.
UPDATE: The Hillsborough County Transportation Workshop held today at 1:30 flopped. It was over in 57 minutes with little discussion when the decision was made to cancel the 4 Transportation Town Hall meetings scheduled in October and November. The meetings had already been rescheduled from August. While no formal votes are taken at workshops the consensus was 4 (Cohen, Kemp, White, Smith) to 2 (Overman, Myers) to direct County staff to reschedule the Town Halls after the first of the year. Commissioner Hagan was a no show. The presentation made to the commissioners today by County staff at the Workshop was very flawed. Stay tuned.
Posted by Sharon Calvert at 1:18 PM