Florida and other states including Georgia, Arizona, Ohio. Texas, Idaho, Kansas, Indiana, Texas and Tennessee passed bills that ban "private" funding of elections and/or prohibit "private" funds from being handed directly to local election officials. Democrat Governors of Michigan, Louisiana, Wisconsin and North Carolina veto'd such bills passed by their State legislatures. The Pennsylvania House passed their bill in December and has sent it over to the State Senate.

New York Congresswoman Claudia Tenney analyzed where the partisan "ZuckBucks" were handed out in 2020. No Surprise! She found that in a number of "swing states", 90% went to the Big Blue urban Counties. 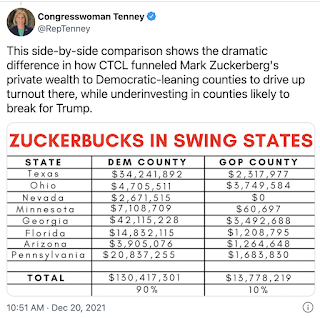 Of the over $17 MILLION "ZuckBucks" handed out to 11 Counties in Florida, $15.7 MILLION or over 92% went to the Blue Counties of Broward, Miami-Dade, West Palm, Alachua, Leon and Hillsborough.

It is important to know what the highly partisan CTCL and CEIR nonprofits did with their billionaire Tech Oligarch's money in 2020 as we approach the mid-term elections. It appears CTCL is poised and ready to funnel highly partisan funds into our elections again.

According to this report, the swing state of Wisconsin may have been ground zero in May 2020 for CTCL's objectives for election officials to push mail ballots, chase after specific demographics of voters and recruit new young activists who never worked an election to replace older poll workers. This report claims Wisconsin used CTCL's millions from a billionaire Tech Oligarch who censors those he politically disagrees with, to embed "activists" into Wisconsin's election system.

In Green Bay, Wisconsin it was reported CTCL inserted a Democrat activist into that city's election activities that including giving the activist access to absentee ballots before the election.

In Pennsylvania this report revealed

Emails from the Office of the Pennsylvania Governor and the Pennsylvania Department of State show that former [Democrat] Secretary of State Kathy Boockvar and an official in Gov. Tom Wolf’s office knew about private 2020 election grants and invited Democratic-leaning counties to apply, appearing to aid the selective process at a time when other counties were unaware.

Emails show that then-Sec. of State Boockvar and an official in the governor’s office acted to push grants to Democratic-tilting counties.

81% of the ZuckBucks money in Pennsylvania went to the Big Blue Counties of Allegheny, Chester, Delaware, Montgomery and Philadelphia. Biden won 8 of the 10 highest ZuckBucks funded counties that received 95% of all CTCL grants in Pennsylvania. Pennsylvania's Democrat Governor Tom Wolfe opposes the bill to prohibit private funding of elections in Pennsylvania so expect more of this from CTCL in PA.
According to the Gatestone Institute, CTCL handed Philadelphia $10 MILLION which more than doubled their annual election office budget of $9.5 MILLION. Philadelphia used their "ZuckBucks" to turn Philadelphia's election office into a massive GOTV machine and campaign in Big Blue Philadelphia.
The vast majority of voters in 2020 had no idea about CTCL, their ZuckBucks and where those dollars were being spent. There was no transparency as Zuckerberg's hundreds of millions of dollars went flying out to mostly Big Blue urban Counties.
The only "ZuckBucks" transparency has come almost exclusively from those seeking information about the "ZuckBucks" funds via public records request after the election. The mainstream media has yawned. If it had been any conservative leaning group doing the same thing, the mainstream media would be screaming daily for election officials to resign.
And now this...
In November 2021, the Public Interest Legal Foundation (PILF) published a document titled How Many Elections Crimes Languish in Florida Prosecutors' Offices that states (highlight mine):

In 2021, the Public Interest Legal Foundation (PILF) asked large Florida counties for information regarding referrals to prosecutors before and around the 2020 Election. PILF received documents detailing 156 referrals from nine county supervisors of elections (SOE) about potential criminal election law violations. A tenth county, Hillsborough, informed PILF of its policy to not alert prosecutors to potential violations.

The counties showing the most referrals to law enforcement are Broward, Miami-Dade, and Palm Beach. The most common types of potential or alleged crimes discovered by officials were noncitizen registration and/or voting, double voting, and vote- by-mail violations.

PILF provides a breakdown of information for each of the 10 large counties they contacted, including whether the County's elected State Attorney had any involvement with the radical Leftist billionaire George Soros. Broward, Miami-Dade, Alachua, Hillsborough, Pinellas, Polk, Palm Beach, St, Lucie, Duval and Orange were contacted. 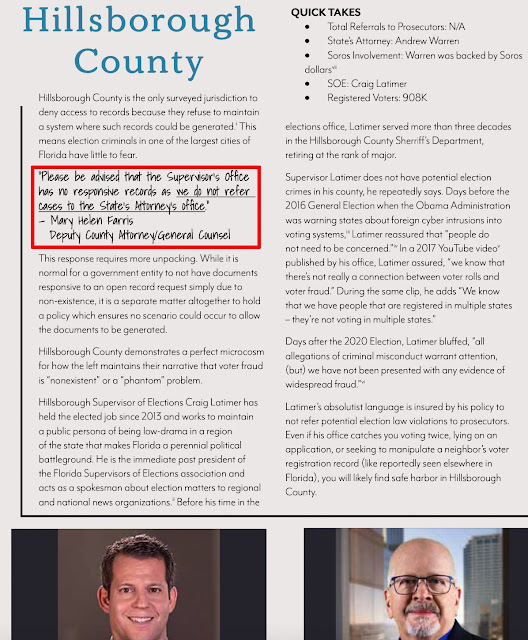 Hillsborough was the ONLY County with such policy. Pretty astounding especially when Latimer retired from the Hillsborough County Sheriff's Department.

The supervisor of elections is authorized to investigate fraudulent registrations and illegal voting and to report his or her findings to the local state attorney and the Florida Elections Commission.

Regarding Hillsborough County's response to them, PILF states:

While it is normal for a government entity to not have documents responsive to an open record request simply due to non-existence, it is a separate matter altogether to hold a policy which ensures no scenario could occur to allow the documents to be generated.

Hillsborough County demonstrates a perfect microcosm for how the left maintains their narrative that voter fraud is “nonexistent” or a “phantom” problem.

With Gov DeSantis wanting the State to investigate and prosecute election crimes, the Times refused to print an op-ed by J Christian Adams, President of PILF.

After the Times rejected Adams op-ed, the Times called in their old Lefty curmudgeon Daniel Ruth to write a hit piece on DeSantis.

The mission of the Times is to create "their" narratives that election crimes or voter fraud are myths. So what that an SOE has a policy of never referring a potential election crime case to the State Attorney's office. So what that SOE's take millions of billionaire Tech Oligarch dollars funneled through a highly partisan nonprofit with no transparency or accountability. So what that an SOE hands a no-bid contract to a PR firm to launch a GOTV campaign targeting specific demographics in the last weeks before an election.

Ironically, Hillsborough County SOE Craig Latimer who opposes the election integrity bill passed in Florida last year, has a mess on his own hands that needs immediate addressing.

As we posted here, Latimer must transparently answer questions ASAP about his 2020 "ZuckBucks", his long term relationship with Democrat aligned CTCL. Latimer also needs to explain why he has no policy for referring any potential election crimes to the State Attorney's office....when State statute authorizes him to do so.

Voters must stay vigilant even in States where private money to fund election activities have been banned. We can bet that the Democrat-aligned CTCL still has their tentacles into local election offices.
More transparency needs to be required from SOE's. Every SOE should be required to put their financials, yearly budget, revenue and expenditures online for pubic access - just like other taxpayer funded entities do.

Voters in Florida must be assured, especially from the Supervisor of Elections who took "ZuckBucks" in 2020, that their offices have completely severed their association with CTCL or any other highly partisan nonprofits.

More must be done in Florida.

Demand transparency and accountability from all the Counties that took "ZuckBucks" in 2020.

Demand the State audit the Counties who took "ZuckBucks" in 2020 before any future State election funds or federal "Help America Vote Act" funds are distributed to them.

Require that all SOE's investigate fraudulent registrations and illegal voting and to report his or her findings to the local state attorney and the Florida Elections Commission.